Italian East Africa (Italian: Africa Orientale Italiana, AOI)[3] was an Italian colony in the Horn of Africa. It was formed in 1936 through the merger of Italian Somalia, Italian Eritrea, and the newly occupied Ethiopian Empire, conquered in the Second Italo-Ethiopian War.[4]

Italian East Africa was divided into six governorates. Eritrea and Somalia, Italian possessions since the 1880s, were enlarged with captured Ethiopian territory and became the Eritrea and Somalia Governorates. The remainder of "Italian Ethiopia" consisted the Harar, Galla-Sidamo, Amhara, and Scioa Governorates. Fascist colonial policy had a divide and conquer characteristic and favored the Somali and Tigrayan peoples in order to weaken the Amhara people who had been the ruling ethnic group in the Ethiopian Empire.

During the Second World War, Italian East Africa was occupied by a British-led force including colonial units and Ethiopian guerrillas in November 1941.[5] After the war, Italian Somalia and Eritrea came under British administration, while Ethiopia regained its independence. In 1950, occupied Somalia became the United Nations Trust Territory of Somaliland, administered by Italy from 1950 until its independence in 1960. Occupied Eritrea became an autonomous part of Ethiopia in 1952. 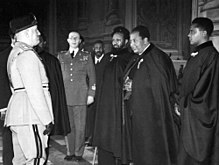 Historians are still divided about the reasons for the Italian attack on Ethiopia in 1935. Some Italian historians such as Franco Catalano and Giorgio Rochat argue that the invasion was an act of social imperialism, contending that the Great Depression had badly damaged Mussolini's prestige, and that he needed a foreign war to distract public opinion.[6] Other historians such as Pietro Pastorelli have argued that the invasion was launched as part of an expansionist program to make Italy the main power in the Red Sea area and the Middle East.[6] A middle way interpretation was offered by the American historian MacGregor Knox, who argued that the war was started for both foreign and domestic reasons, being both a part of Mussolini's long-range expansionist plans and intended to give Mussolini a foreign policy triumph that would allow him to push the Fascist system in a more radical direction at home.[6]

Unlike forty years earlier, Italy's forces were far superior to the Ethiopian forces, especially in air power, and they were soon victorious. Emperor Haile Selassie was forced to flee the country, with Italian forces entering the capital city, Addis Abeba, to proclaim an "Italian Empire of Ethiopia" by 5 May 1936.[7] Some Ethiopians welcomed the Italians and collaborated with them in the government of the newly created Italian Empire, like Ras Sejum Mangascià, Ras Ghetacciù Abaté and Ras Kebbedé Guebret. In 1937 the friendship of Sejum Mangascia with the Italian Viceroy Prince Amedeo, Duke of Aosta enabled this Ras to play an influential role in securing the release of 3,000 Ethiopian POWs being held in Italian Somaliland.

The Italian victory in the war coincided with the zenith of the international popularity of dictator Benito Mussolini's Fascist regime, during which colonialist leaders praised Mussolini for his actions.[8] Mussolini's international popularity decreased as he endorsed the annexation of Austria by Nazi Germany, beginning a political tilt toward Germany that eventually led to the downfall of Mussolini and the Fascist regime in Italy in World War II.[9] Italian East Africa was formed on 1 June 1936, shortly after the conquest, by merging the pre-existing colonies of Italian Somaliland and Italian Eritrea with the newly conquered territory.[10] The maintenance and creation of Ethiopian colonies was very costly. 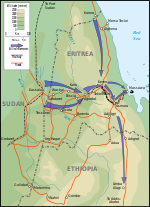 On 10 June 1940, Italy declared war on Britain and France, which made Italian military forces in Libya a threat to Egypt and those in the Italian East Africa a danger to the British and French territories in the Horn of Africa. Italian belligerence also closed the Mediterranean to Allied merchant ships and endangered British supply routes along the coast of East Africa, the Gulf of Aden, Red Sea and the Suez Canal. (The Kingdom of Egypt remained neutral during World War II, but the Anglo-Egyptian Treaty of 1936 allowed the British to occupy Egypt and Anglo-Egyptian Sudan.)[11]:6–7, 69 Egypt, the Suez Canal, French Somaliland and British Somaliland were also vulnerable to invasion, but the Comando Supremo (Italian General Staff) had planned for a war after 1942. In the summer of 1940, Italy was far from ready for a long war or for the occupation of large areas of Africa.[11]:38–40

Hostilities began on 13 June 1940, with an Italian air raid on the base of 1 Squadron Southern Rhodesian Air Force (237 (Rhodesia) Squadron RAF) at Wajir in the East Africa Protectorate (Kenya). In August 1940, the protectorate of British Somaliland was occupied by Italian forces and absorbed into Italian East Africa. This occupation lasted around six months. By early 1941, Italian forces had been largely pushed back from Kenya and Sudan. On 6 April 1941, Addis Ababa was occupied by the 11th (African) Division, which received the surrender of the city.[11]:421–422 The remnants of the Italian forces in the AOI surrendered after the Battle of Gondar in November 1941, except for groups that fought an Italian guerrilla war in Ethiopia against the British until the Armistice of Cassibile (3 September 1943) ended hostilities between Italy and the Allies.[citation needed]

In the peace treaty of February 1947, Italy officially renounced sovereignty over its African colonies. Eritrea was placed under British military administration for the duration, and in 1950, it became part of Ethiopia. After 1945, Britain controlled both Somalilands, as protectorates. In November 1949, during the Potsdam Conference, the United Nations granted Italy trusteeship of Italian Somaliland under close supervision, on condition that Somalia achieve independence within ten years.[12] British Somaliland became independent on 26 June 1960 as the State of Somaliland, the Trust Territory of Somalia (ex-Italian Somaliland) became independent on 1 July 1960 and the territories united as the Somali Republic.[13]

The colony was administered by a Viceroy of Ethiopia and Governor General of Italian East Africa, appointed by the Italian king. The dominion was further divided for administrative purposes into six Governorates, further divided into forty Commissariati.

When established in 1936, Italian East Africa consisted of the old Italian possessions in the Horn of Africa: Italian Eritrea and Italian Somaliland, combined with the recently conquered Empire of Ethiopia.[3] Victor Emmanuel III of Italy consequently adopted the title of "Emperor of Ethiopia", although this was not recognized by any country other than Nazi Germany and Imperial Japan. The territory was divided into the six Governorates: Eritrea and Somalia, consisting of the respective former colonies, enlarged with territory from Ethiopia. The remainder of "Italian Ethiopia" consisted of the Harar, Galla-Sidamo, Amhara, and Addis Abeba Governorates. The Addis Abeba Governorate was enlarged into the Scioa Governorate with territory from neighboring Harar, Galla-Sidamo and Amhara in November 1938.

Italian East Africa was briefly enlarged in 1940, as Italian forces conquered British Somaliland, thereby bringing all Somali territories, aside from the small colony of French Somaliland, under Italian administration. However, the enlarged colony was dismembered only a year later, when in the course of the East African Campaign the colony was occupied by British forces.[14]

Fascist colonial policy in Italian East Africa had a divide and conquer characteristic. 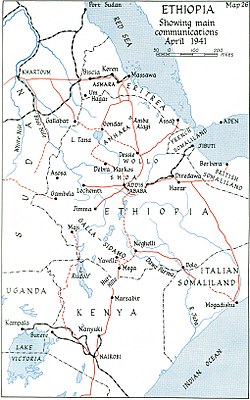 Map showing in red the new roads (like the "Imperial road", and those in construction in 1941) created by the Italians in Ethiopia and AOI

In order to weaken the Orthodox Christian Amhara people who had run Ethiopia in the past, territory claimed by Eritrean Tigray-Tigrinyas and Somalis was given to the Eritrea Governorate and Somalia Governorate.[15]:5 Reconstruction efforts after the war in 1936 were partially focused on benefiting the Muslim peoples in the colony at the expense of the Amhara to strengthen support by Muslims for the Italian colony.[15]:5

Italy's Fascist regime encouraged Italian peasants to colonize Ethiopia by setting up farms and small manufacturing businesses.[15]:5 However, few Italians came to the Ethiopian colony, with most going to Eritrea and Somalia. While Italian Eritrea enjoyed some degree of development, supported by nearly 80,000 Italian colonists,[16] by 1940 only 3,200 farmers had arrived in Ethiopia, less than ten percent of the Fascist regime's goal.[15]:6 Continued insurgency by native Ethiopians, lack of natural resources, rough terrain, and uncertainty of political and military conditions discouraged development and settlement in the countryside.[15]:6

Asmara station on the Eritrean Railway in 1938, with passengers boarding a Littorina

Italians even created new airports and in 1936 started the world famous Linea dell'Impero, a flight connecting Addis Ababa to Rome. The line was opened after the Italian conquest of Ethiopia and was followed by the first air links with the Italian colonies in Africa Orientale Italiana (Italian East Africa), which began in a pioneering way since 1934. The route was enlarged to 6,379 km and initially joined Rome with Addis Ababa via Syracuse, Benghazi, Cairo, Wadi Halfa, Khartoum, Kassala, Asmara, Dire Dawa.[18] There was a change of aircraft in Benghazi (or sometimes in Tripoli). The route was carried out in three and a half days of daytime flight and the frequency was four flights per week in both directions. Later from Addis Ababa there were three flights a week that continued to Mogadishu, capital of Italian Somalia.

The most important railway line in the African colonies of the Kingdom of Italy, the 784 km long Djibouti-Addis Ababa, was acquired following the conquest of the Ethiopian Empire by the Italians in 1936. The route was served until 1935 by steam trains that took about 36 hours to do the total trip between the capital of Ethiopia and the port of Djibouti. In 1938 following the Italian conquest, train speed was increased with the introduction of four high capacity railcars "type 038" derived from the model Fiat ALn56.[19]

These diesel trains were able to reach 70 km/h and so the time travel was cut in half to just 18 hours: they were used until the mid 1960s.[20] At the main stations there were some bus connections to the other cities of Italian Ethiopia not served by the railway.[21] Additionally, near the Addis Ababa station was created a special unit against fire, that was the only one in all Africa.[22]

However Ethiopia and Africa Orientale Italiana (AOI) proved to be extremely expensive to maintain, as the budget for the fiscal year 1936-37 had been set at 19.136 billion lira to create the necessary infrastructure for the colony.[15]:5 At the time, Italy's entire yearly revenue was only 18.581 billion lira.[15]:5

The architects of the Fascist regime had drafted grandiose urbanistic projects for the enlargement of Addis Ababa, in order to build a state-of-the-art capital of the Africa Orientale Italiana, but these architectural plans -like all the other developments- were stopped by World War II.[23] 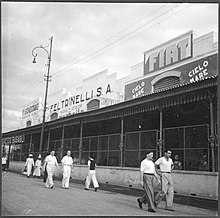 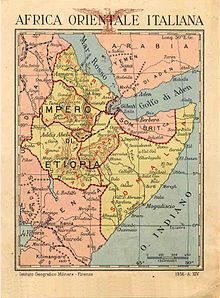 Italian Atrocities against the Ethiopian population

In February 1937, following many murders of Italian & Eritrean soldiers and an assassination attempt on Italian East Africa's Viceroy, Marshal Rodolfo Graziani, Italian soldiers raided the famous Ethiopian monastery Debre Libanos, where the attempt plotters had taken refuge, and executed the monks and nuns.[15]:5 Afterwards, Italian soldiers destroyed native settlements in Addis Ababa, which resulted -according to Ethiopian estimates- in nearly 30,000 Ethiopians being killed and their homes left burned to the ground.[15]:5[25] The massacre has come to be known as Yekatit 12.[26]

After the massacres, Graziani became known as "the Butcher of Ethiopia".[27] He was subsequently removed by Mussolini and replaced by Prince Amedeo, Duke of Aosta, who followed a more conciliatory policy towards the natives, obtaining a huge success in pacifying Ethiopia.[28]

Indeed by the eve of World War II (January/February 1940) the Ethiopian guerrillas were still in control of some areas of Harar and the Galla-Sidamo Governorate. But Prince Amedeo's conciliatory efforts obtained that Abebe Aregai, then the last leader of the "Arbegnochs" (as the guerrilla fighters were called in Ethiopia) made a surrender proposal to the Italians in spring 1940 (after the 1939 surrender of Ethiopian leaders Zaudiè Asfau and Olonà Dinkel)[29]. However the start of WW2 in Italian East Africa blocked -under British influence- this surrender proposal.