Italian Chileans (in Spanish: Italochilenos, Italian: Italo-cileni) are Chileans of full or partly Italian descent. It is estimated that 150,000[2] at 600,000[3] Chileans are of full or partial Italian ancestry.[4] In Southern Chile, there were state-conducted Italian immigrant programs though they were not as massive as the German and Croatian immigrant programs. Families settled especially in Capitán Pastene, Angol, Lumaco, and Temuco but also in Valparaiso, Concepción, Chillán, Valdivia, and Osorno. One of the notable Italian influences in Chile is, for example, the sizable number of Italian surnames of a proportion of Chilean politicians, businessmen, and intellectuals, many of whom intermarried into the "Castilian-Basque" elites.

Italian Chileans, along with French Chileans, contributed to the development, cultivation and ownership of the world-famous Chilean wines from haciendas in the Central Valley, since the first wave of Italians arrived in colonial Chile in the early 19th century.

Although being just a fraction of the size of the migration to Argentina, Italians in immigration to Chile have been present since the arrival of the first Spaniards into the country, such as Captain Giovanni Battista Pastene who helped Pedro de Valdivia's expedition. Thence, with akin Latin culture, Italians have helped forge the nation, with architects (Gioacchino Toesca), painters (Camilo Mori), businessmen (Anacleto Angelini), economists (Vittorio Corbo) and statesmen (Arturo Alessandri).

Since Italian immigration was never massive or organized, the only case of concerted immigration appeared in the town of Capitán Pastene, in the Araucanía Region of southern Chile, where in 1904, 23 families from Emilia-Romagna were left at their own device after being wrongfully enticed to the "riches" of Chile. Today, this small town celebrates a renaissance of their Italic heritage.

Italian emigration in Chile was limited to a few tens of Italians during the centuries of the Spanish colony.

However, there was a substantial flow of migration from Liguria to the area of Valparaíso, which came to control 70% of the city. These immigrants founded the "Body of Fire" (called "Cristobal Colon") of the city and its "Italian School," whose building the government of Chile has declared a National Historic Monument (Spanish: "Monumento Histórico Nacional").[5]

At the end of the 19th century, many Italian merchants were rooted in the northern part of Arica, where they began exploiting the rich mines of saltpetre. Meanwhile, many Italian families settled in the capital Santiago, Concepción and Punta Arenas.

In 1904, an emigration of 7,800 immigrants of Emilia was planned to a town of the Araucanía Region, which was named "Colonia Nueva Italia" and now called Capitán Pastene.

Throughout the central-southern zone of Chile, 78,740 Italians were transplanted to the early 20th century.[6]

Some Italian-Chileans voluntarily returned to Italy, like the aviator Arturo Dell'Oro, who died in the skies of Belluno in 1917, which was head to Valparaíso one of the main Italian schools in Chile. Giulio Ravazzano (medal of honor) went back to Italy to defend his country during the Great War, to return later on where he married.

After World War I, it had exhausted major migration from Italy, and Chile currently are 339,650 Italian citizens (including those with dual passports).[7]

Many Italian Chileans have reached positions of leadership in the society of Chile, like President Jorge Alessandri. 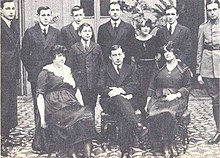 Family Alessandri in 1920, with two future presidents of Chile.

Family Castagna in 1910, who emigrated from Pavullo, Italy to Capitán Pastene.

The Italian community has been present since the times of Giovanni Battista Pastene, who participated in the discovery of Chile to the Spanish crown in the shipment of Pedro de Valdivia.

Since then, many Italians have occupied positions of importance and married with Chileans of Spanish origin who ruled Chile; for example, the wife of Salvador Allende, the Italian Chilean Hortensia Bussi.

Former President Salvador Allende told the journalist Régis Debray that a Genovese shoemaker, Giovanni De Marchi, had a strong influence on its policy of training adolescents:

Just finished classes went to speak to this anarchist who had a great deal of influence on my life as a boy. He was sixty, or perhaps sixty years, and would chat with me. I was taught to play chess, I spoke of things of political life, and I lent books.[8]

In the early 19th century, the patriarch of the Alessandri family, Giuseppe Pietro Alessandri Tarzo, came from Tuscany and worked as Consul of the Kingdom of Sardinia in Santiago. Among his descendants are two presidents of Chile, Arturo Alessandri (1920–1925 and 1932–1938) and Jorge Alessandri (1958–1964).[citation needed]

Among the Italian-Chileans are architects (as Gioacchino Toeschi), painters (as Camilo Mori), industrial (as Anacleto Angelini), actresses (like Claudia Conserva), economists (as Vittorio Corbo) and statesmen (as the President Arturo Alessandri and his son).

The Italian language is promoted by the Chilean section of Dante Alighieri, while the Italian press has with:

There are some Italian schools in Chile (including in Santiago, the "Vittorio Montiglio" [9] and Valparaíso, the "Arturo Dell'Oro" [10]) and some organizations protect and serve the Italian community.[11]

In the southern Chilean town named Capitán Pastene, there is currently a small concentration of 2,200 Italo-Chilean, who constitute almost all of the local population and maintain a few words of Italian dialect of their ancestors emigrated.

In 1904 about 100 families from the province of Modena moved there, as organized by the Chilean Government, to populate an area newly conquered by Chilean troops in their war against Mapuche tribes.[12]