Israel Railways Ltd., dba Israel Railways (Hebrew: רַכֶּבֶת יִשְׂרָאֵל‎, Rakevet Yisra'el), is the state-owned principal railway company responsible for all inter-city, commuter, and freight rail transport in Israel. All its lines are standard gauge. The network is centered in Israel's densely populated coastal plain, from which lines radiate out in many directions. In 2018, Israel Railways carried 68 million passengers.

There are 68 stations on the Israel Railways network, with almost all of the stations being accessible to disabled persons, with public announcement and passenger information systems, vending machines and parking.

Bicycles are permitted on board the train in designated coaches.

Israel Railways encourage people to use bicycles by building a double-deck parking for bicycles in every train station and by allowing people to take the bike with them on the train to minimize the need for private cars.

In Israel, smoking is prohibited in public enclosed places or commercial areas. Although smoking in railway stations is allowed at designated zones of the station, the sale of tobacco from automated vending machines is prohibited. 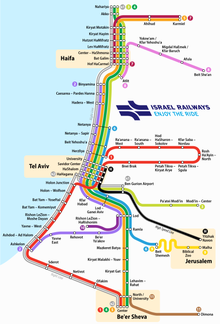 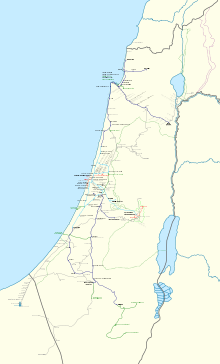 Regional map of past and present railway lines

The flagship project of Israel Railways is the construction of an improved rail line from Tel Aviv to Jerusalem. The line began as an extension of the current railway to Ben Gurion Airport and Modi'in, and terminates in a new underground station beside the Jerusalem Central Bus Station. An additional proposal will connect Modi'in to Jerusalem if built by connecting to the aforementioned line.[4] The project of electrification, starting with the new Jerusalem-Tel Aviv line is ongoing with plans to eventually electrify all or most of the network.

A 23.5 kilometres (14.6 mi) line from the city of Acre, on the Mediterranean coast, to Karmiel was completed in March 2017. However, this tract bypasses Acre and does not make a stop there ; it is planned to be extended north to the north-eastern town of Qiryat Shemona, with future stations also planned for Jadeidi-Makr and Majd al-Krum, though there is no timetable for construction. This line will be fully electrified.[5][6]

There were plans to build a high-speed railway to Eilat. In 2019 the project has been indefinitely frozen.[7]

In 2011 the reconstruction and expansion of the 60 kilometres (37 mi) long, formerly abandoned Jezreel Valley railway line connecting Haifa and Beit Shean (near the Jordanian border) started. This was completed in 2016. There has been talk of further extending the line to Irbid, in Jordan (to allow a direct freight connection from Jordan to the Mediterranean Sea); however, no decision has yet been made on this matter. Another proposed extension under discussion would connect the reconstructed Jezreel Valley railway at Afula to Tiberias.[8]

In May 2017, an extension of the railway from Arad via Kuseife was approved. The line would connect to the existing Beersheba–Dimona rail line at the proposed new station at Nevatim.[9]

In 2017, Israel Railways founded a Tunnels Unit that is responsible for the daily operation of railway tunnels, including lighting, air circulation, etc. and managing emergencies.[42]