Ismailia (Arabic: الإسماعيلية‎ al-Ismāʻīlīyah, pronounced [lesmæʕiˈlejjæ]) is a city in north-eastern Egypt. Known in Egypt as "The City of Beauty and Enchantment",[1] Ismailia is situated on the west bank of the Suez Canal, it is the capital of the Ismailia Governorate. The city has a population of 366,669 as of 2012[update] (or approximately 750,000, including surrounding rural areas). It is located approximately halfway between Port Said to the north and Suez to the south. The Canal widens at that point to include Lake Timsah, one of the Bitter Lakes linked by the Canal. 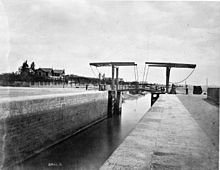 Indian troops lined up in front of Ismalia Train Station, 1915.

Postcard of the Suez Canal Company

Ismailia was founded in 1863, during the construction of the Suez Canal, by Khedive Ismail the Magnificent, after whom the city is named. Following the Battle of Kafr-el-Dawwar in 1882 the British established a base there.

The head office of the Suez Canal Authority is located in Ismailia at the shore of Lake Timsah. It has a large number of buildings dating from British and French involvement with the Canal. Most of these buildings are currently used by Canal employees and officials.

During World War I the British had an air base there and the Battle of Romani took place nearby. Ismailia War Cemetery was designed in 1919 by Sir Robert Lorimer marking the casualties of the battle.[2]

In 1973 the Battle of Ismailia took place in the city.

The Muslim Brotherhood was founded in Ismailia by Hassan al-Banna in March 1928. An underground paramilitary wing was established in the 1940s, primarily to fight British occupation forces. In the early 1950s, Ismailia hosted the British Military HQ and the Civilian Administration Centre of the Canal Zone. British suppression of an uprising by rebellious Egyptian police there on 25 January 1952 was a key event leading to the overthrow of King Farouk I later that year and the Egyptian Revolution that followed. British forces pulled out of Ismailia in 1954.

On 1982.12.17 an Eparchy (Eastern Catholic Diocese) of Ismayliah was established on territory split off from the Coptic Catholic Patriarchate of Alexandria (Alexandrian Rite in Coptic language), which remains its Metropolitan. Its episcopal see is St. Mark's cathedral.

Virgin Mary Church known as "Guardian of the Canal", is one of many examples of French architecture in Ismailia

Ismailia hosts two important festivals each year. The first is the International Film Festival for Documentaries and Shorts that is held in June.[3] In June 2014 the 17th consecutive festival was organized. The second is the Ismailia International Folklore Arts Festival that is held in September. In this festival folkloric troupes from all around the globe meet in Ismailia, where they perform folkloric dances representing the culture of their countries.[4]

A major attraction is the Ismailia Museum which was built in 1932. Visitors will find a variety of significant archaeological finds especially from sites in the Ismailia governorate such as Tell el-Maskhuta, from North Sinai, and from Upper Egypt. 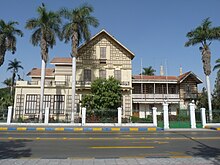 Ferdinand de Lesseps' house and office in Ismailia, near the Suez Canal

Ismailia does get tourists from within Egypt, but is not a major tourism destination for international tourists. The city is approximately a ninety-minute automobile drive from Cairo. From Ismailia it is approximately a four-hour drive to Sharm el-Sheikh in South Sinai. Driving to the Taba Border Crossing at Taba and the Rafah Border Crossing at Rafah are both approximately four-hour drives. The city is also infamous for sidewalks painted in yellow and blue after the original kit colour of Ismaily Sports Club, the local sports team of the governorate

Ismailia owns the third most successful club in Egypt in the field of Football, Ismaily SC. The club's performance is considered a major political issue, and can tend to dictate the city's mood. The team enjoys brief stints of competition for local and international competition, but its financial situation prevents these stints from extending beyond a few years. The team has won the Egyptian League three times (1967, 1991, 2002), the Egyptian Cup twice (1997, 2000), and the African Champions League once (1969) as a first Egyptian Arab Club team won this league.