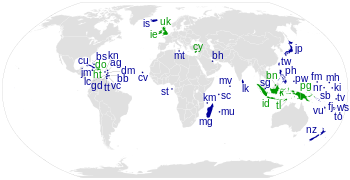 Sovereign states and states with limited recognition fully on islands (Australia is regarded a continent): those with land borders shaded green, and those without shaded dark blue

An island country or island nation is a country whose primary territory consists of one or more islands or parts of islands. As of 1996, 25.2% of all independent countries were island countries.[1][needs update] Island nations, because of their geography, tend to be significantly more vulnerable to climate change than other nations, in part because of sea level rise, saltwater intrusion, and impacts on food supply.

Island countries have often been the basis of maritime conquest and historical rivalry between other countries.[2] Island countries are more susceptible to attack by large, continental countries due to their size and dependence on sea and air lines of communication.[3] Many island countries are also vulnerable to predation by mercenaries and other foreign invaders,[4] although their isolation also makes them a difficult target.

Many developing small island countries rely heavily on fish for their main supply of food.[5] Some are turning to renewable energy—such as wind power, hydropower, geothermal power and biodiesel from copra oil—to defend against potential rises in oil prices.[6]

This section is an excerpt from Effects of climate change on island nations[edit]
Climate change is producing drastic changes to Earth processes and changing Earth's environmental status quo. Especially pertinent to human development is the threat of climate change on island nations. As sea levels continue to rise, island peoples and cultures are being threatened. There are small and low populated islands that don’t have the money to protect the island. People from those islands may not have the resources to move off the island. The former President of the Republic of the Marshall Islands, Christopher Loeak, said "In the last year alone, my country has suffered through unprecedented droughts in the north, and the biggest ever king tide in the south; and we have watched the most devastating typhoons in history leave a trail of death and destruction across the region."[9] Efforts to combat these environmental changes are ongoing and multinational. Particularly notable is the adoption of the Paris agreement at the UN Climate Summit in 2015.

Many island countries rely heavily on imports and are greatly affected by changes in the global economy.[10] Due to the nature of island countries their economies are often characterised by being smaller, relatively isolated from world trade and economy, more vulnerable to shipping costs, and more likely to suffer environmental damage to infrastructure; exceptions include Japan and the United Kingdom.[11][12][13] The dominant industry for many island countries is tourism.[14]

Island countries are typically small with low populations, although some, like Indonesia and Japan are notable exceptions.[15]

Some island countries are centred on one or two major islands, such as the United Kingdom, Trinidad and Tobago, New Zealand, Cuba, Bahrain, Singapore, Iceland, Malta, and Taiwan. Others are spread out over hundreds or thousands of smaller islands, such as Indonesia, the Philippines, The Bahamas, Seychelles, and the Maldives. Some island countries share one or more of their islands with other countries, such as the United Kingdom and Ireland; Haiti and the Dominican Republic; and Indonesia, which shares islands with Papua New Guinea, Brunei, East Timor, and Malaysia. Bahrain, Singapore and the United Kingdom have fixed links such as bridges and tunnels to the continental landmass: Bahrain is linked to Saudi Arabia by the King Fahd Causeway, Singapore to Malaysia by the Johor–Singapore Causeway and Second Link, and the United Kingdom has a railway connection to France through the Channel Tunnel.

Geographically, the country of Australia is considered a continental landmass rather than an island, covering the largest landmass of the Australian continent. In the past, however, it was considered an island country for tourism purposes[16] (among others) and is sometimes referred to as such.[17]