Christianity in Lebanon Constitution of Lebanon Demographics of Lebanon

Islam in Lebanon (Arabic: الإسلام في لبنان‎) is followed by nearly 60% , including the Druze, of the country's total population: Sunnis make up also 27.4%, with the Shafi'i madhhab being the predominant Sunni group with pockets of Hanafi and Hanbali. Shias make up 26.8%, with Twelvers being the predominant Shia group, followed by Alawites and Ismailis. Several large Sufi orders are active in the country, including the Naqshbandi and Qadiriyya tariqas.

Although not traditionally considered as Muslims, the Druze make up 5.6% of the total population, which under the Lebanese political division (Parliament of Lebanon Seat Allocation) the Druze community is designated as one of the five Lebanese Muslim communities (Sunni, Shia, Druze, Alawi, and Ismaili).[3][4]

The number of Muslims in Lebanon has been disputed for many years. There has been no official census in Lebanon since 1932. According to the CIA World Factbook,[11] the Muslim population is estimated at around 59.5%[12] within the Lebanese territory and of the 8.6[13]–14[14] million Lebanese diaspora is believed by some to be about 20%[citation needed] of the total population.

Under the terms of an agreement known as the National Pact between the various political and religious leaders of Lebanon, the president of the country must be a Maronite, the Prime Minister must be a Sunnite, and the Speaker of Parliament must be a Shiite.

Non-religion is not recognized by the state, the Minister of the Interior Ziad Baroud made it possible in 2009 to have the religious sect removed from the Lebanese identity card. This does not, however, deny the religious authorities complete control over civil family issues inside the country.[16][17] 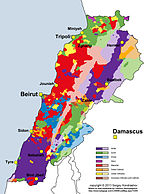 Distribution of Lebanon's religious groups according to 2009 municipal election data. 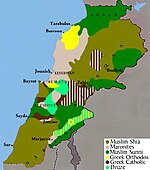 An estimate of the area distribution of Lebanon's main religious groups.

Lebanese Muslims are divided into many branches like Shiites, Sunnites, Druze, Alawites, and Ismailis.

The Lebanese Shia Muslims are around 27%[12]–29%[18][19] of the total population. Twelvers are the predominant Shia group, followed by Alawites and Ismailis. The Speaker of Parliament is always a Shi'a Muslim, as it is the only high post that Shi'as are eligible for.[20][21][22][23] The Shiites are largely concentrated in northern and central Beqaa, Southern Lebanon, in south Beirut (southern parts of Greater Beirut).[24][25]

The Lebanese Sunni Muslims constitute also about 27%[24]–29% [12] of the total population. Sunni notables traditionally held power in the Lebanese state together, and they are still the only ones eligible for the post of Prime Minister[26] Sunnis form the majority in west Beirut, Tripoli, Sidon, Central and Western Beqaa and hasbaya, ikleem al kharroub, Miniyeh and Danniyeh districts, and Akkar in the north.[24]

The Lebanese Druze constitute 5%[12] of the population and can be found primarily in Mount Lebanon and the Shouf District. which under the Lebanese political division (Parliament of Lebanon Seat Allocation) the Druze community is designated as one of the five Lebanese Muslim communities (Sunni, Shia, Druze, Alawi, and Ismaili).[3][4]