Banded iron formation Precambrian Concretion
This article is about the sedimentary rock. For other uses, see Ironstone (disambiguation). 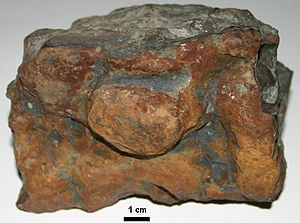 Ironstone is a sedimentary rock, either deposited directly as a ferruginous sediment or created by chemical replacement, that contains a substantial proportion of an iron compound from which iron can be smelted commercially. This term is customarily restricted to hard coarsely banded, nonbanded, and noncherty sedimentary rocks of post-Precambrian age. The Precambrian deposits, which have a different origin, are generally known as banded iron formations. The iron minerals comprising ironstones can consist either of oxides, i.e. limonite, hematite, and magnetite; carbonates, i.e. siderite; silicates, i.e. chamosite; or some combination of these minerals.[1][2]

Freshly cleaved ironstone is usually grey. The brown external appearance is due to oxidation of its surface. Ironstone, being a sedimentary rock is not always homogeneous, and can be found in a red and black banded form called tiger iron, sometimes used for jewelry purposes.

Ironstone occurs in a variety of forms. The various forms of ironstone include siderite nodules; deeply weathered saprolite, i.e. (laterite); and ooidal ironstone.

Ironstone as a source of iron

Ironstone, although widespread, is a limited source of iron (Fe). Historically, most of British iron originated from ironstone, but it is now rarely used for this purpose because it is far too limited in quantity to be an economic source of iron ore.

Ironstone's oxide impurities render it useless as a component in ceramics: the "ironstone china" of Staffordshire and American manufacture, a fine white high-fired vitreous semi-porcelain, commonly used for heavy-duty dinner services in the 19th century,[3] depends on the whiteness of its body.[clarification needed] Its "iron" quality is in its resistance to chipping, not in any ingredient in its manufacture.

The stone can be used as a building material. Examples include the parish churches at Kirby Bellars, Eydon Hall and South Croxton in Leicestershire.