The Shire of Inverness (Scottish Gaelic: Siorrachd Inbhir Nis) is a historic county, registration county and lieutenancy area of Scotland. Covering much of the Highlands and Outer Hebrides, it is Scotland's largest county, though one of the smallest in population, with 67,733 people or 1.34% of the Scottish population.[1]

The extent of the lieutenancy area was defined in 1975 as covering the districts of Inverness, Badenoch & Strathspey, and Lochaber.[citation needed] Thus it differs from the county in that it includes parts of what were once Moray and Banffshire, but does not include any of the Outer Hebrides which were given their own lieutenancy area — the Western Isles.[citation needed] 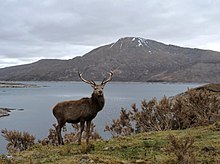 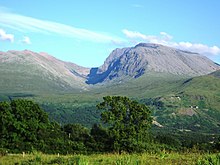 Inverness-shire is Scotland's largest county, and the second largest in the UK as a whole after Yorkshire. It borders Ross-shire to the north, Nairnshire, Moray, Banffshire and Aberdeenshire to the east, and Perthshire and Argyllshire to the south.

Inverness-shire contains numerous small islands off its west coast which form part of the Inner Hebrides. The largest of these is Skye, separated from the Inverness-shire mainland by the Sound of Sleat; popular with tourists, it is a huge, sprawling island - the second biggest in Scotland - containing numerous peninsulas and offshore islands. The small isle of Eigg is also within Inverness-shire, despite the other Small Isles being in Argyllshire. To the west, across the Little Minch, most of the Outer Hebrides fall within the county, with the notable exception of Lewis which is in Ross-shire. Further west still lie the remote islands of St Kilda, which have been uninhabited since 1930. Much further west, 230 miles from the Outer Hebrides, lies the extremely remote, uninhabitable island of Rockall, which is subject to a territorial dispute with Ireland.

Arms of the former county council

Inverness-shire's coat of arms is blazoned:

Azure, in dexter chief a stag's head and in sinister chief a bull's head both erased, and in base a galley, sails furled, oars in action and flagged, all Or. Beneath the shield an escrol bearing this motto: Air son Math na Siorrachd.

Inverness-shire acquired a county council in 1890, under the Local Government (Scotland) Act 1889, and, under the same legislation, boundaries were altered to make the county a single contiguous area, transferring several exclaves of other counties to Inverness-shire.

Although the new boundaries were supposed to be valid for all purposes (unlike earlier boundaries, which were really default boundaries and not necessarily those used for any particular purpose), the burghs of Inverness, Fort William, Kingussie, which had their own town councils, retained autonomous status and were for some purposes beyond the writ of the new county council. The town of Inverness had been established as a royal burgh since the mid 12th century, Fort William, originally a Fort of that name built by the Government to keep the Highlanders in their place, around which grew up a village which became in turn Gordonsburgh, Maryburgh, Duncansburgh and latterly the town/burgh of Fort William which had been established as a burgh of barony since 1618 and Kingussie had been established as a burgh of barony since 1464. Also, use of the new boundaries for parliamentary elections was specifically excluded.

The old county councils were abolished by the Local Government (Scotland) Act 1973 and Scotland was instead governed by a two-tier system of regions and districts. Mainland Inverness-shire was split amongst four districts of the Highland region, whilst the county's territory in the Outer Hebrides was transferred to the Western Isles council area.

Within the Highland region, local government functions were divided between the regional council and the district councils. For example, education was a regional responsibility, and housing was a district responsibility.

In 1996, under the Local Government etc (Scotland) Act 1994, the two-tier system was abolished and the Highland region became a unitary council area.

The new unitary Highland Council adopted the areas of the former districts as management areas. Each management area was represented, initially, by area committees consisting of councillors elected from areas (groups of local government wards) corresponding to the management areas, but changes to ward boundaries in 1999 created a mismatch between committee areas and management areas.

The total number of Highland councillors is 80, elected by the single transferable vote system of election, which is designed to produce a form of proportional representation. Wards in the Inverness city area elect 26 of the 34 council members elected from the Inverness, Nairn and Badenoch and Strathspey corporate management area.

The city area is similar but not identical to the former district of Inverness.

Civil parishes are still used for some statistical purposes, and separate census figures are published for them. As their areas have been largely unchanged since the 19th century this allows for comparison of population figures over an extended period of time. 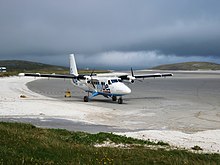 The Highland Main Line connects Inverness by rail to Perth to the south, Kyle of Lochalsh to the west and Thurso/Wick to the north. The West Highland Line connects Fort William to Mallaig. The Inverness to Aberdeen main line also serves Nairn within the Highland Council's area.

The Isle of Skye is connected to the mainland by a bridge from Kyle of Lochalsh in Ross-shire.

Various bus companies serve the larger towns of the county, such as Stagecoach Group and Scottish Citylink. PlusBus operate local services in the Inverness area, and Shiel Buses in the Fort William area. Stagecoach operate several bus routes on the Isle of Skye.[5]

Numerous ferries connect the islands of the Outer Hebrides to each and also the Inner Hebrides and the Scottish mainland.

There are three airports in the county: Inverness, Benbecula and Barra. All three operate flights within Scotland, with Inverness also providing flights to other cities in the UK as well as some destinations in Europe. Barra Airport is famous within aviation circles as it is the only airport in the world where scheduled flights use a beach as the runway.[6]

In 1983, eight years after the local government county of Inverness had been divided between the Highland region and the Western Isles council area, three new constituencies were created to cover the Highland region. The region, until 1996, and the unitary Highland council area, 1996 to present, have been covered by three constituencies since then but there were changes to boundaries and names in 1997 and 2005.

Since 1983, Inverness has appeared in the names of Westminster and Holyrood constituencies as tabled below.