Inuit Nunangat (/ˈɪnjuɪtˈnunæŋæt/; Inuktitut syllabics: ᐃᓄᐃᑦ ᓄᓇᖓᑦ; lit. "lands, waters and ices of the [Inuit] people") is the homeland of the Inuit in Canada. This Arctic homeland consists of four northern Canadian regions called the Inuvialuit Settlement Region (home of the Inuvialuit and the northern portion of the Northwest Territories), the Canadian territory of Nunavut (ᓄᓇᕗᑦ), Nunavik (ᓄᓇᕕᒃ) in northern Quebec and Nunatsiavut of Newfoundland and Labrador.

Originally using the Greenlandic term "Nunaat" excluding the waters and ices, Inuit of Canada formally switched to the Inuktitut "Nunangat" in 2009 to reflect the integral nature "lands, waters and ices" have to Inuit culture.[5]

Aside from Métis, Inuit are the most recent Indigenous arrivals on the continent.

Inuit ancestors known as the Thule settled the Arctic replacing the previous dominant Dorset culture (Tuniit). The last remnant of Tuniit were Sadlermiut who disappeared in the early 1900s.

Inuit replaced the local Dorset culture over the course of around 200 years in the first millennium CE.

Displacement of the Tuniit ᑐᓃᑦ, or the Dorset people, and the arrival of the Inuit (whose ancestors are often called Thule) occurred in the 1100-1300s CE. Coming from Siberia where they split from the Aleut and other related peoples about 4,000 years ago, Inuit had reached Inughuit Nunaat in western Greenland by about 1300 CE, bringing with them transport dogs and various new technologies.

Trade relations were and remain strong with bordering countries and nations,[6] such as with the Gwich'in[7] and Chipewyan (Dënesųłı̨né)[8] of Denendeh and Innu of Nitassinan ᓂᑕᔅᓯᓇᓐ,[9] though occasional conflicts arose. Trade and relations with Europeans began with sparse Norse–Inuit contact and Basque trade with the southern NunatuKavummuit of NunatuKavut and the Nunatsiavummuit. Martin Frobisher's 1576 expedition to find the Northwest Passage landed on and around Baffin Island, in today's Qikiqtaaluk Region ᕿᑭᖅᑖᓗᒃ, where three Inuit, a man called Calichough (Kalicho), a woman, Egnock (Arnaq), and her child, Nutioc (Nuttaaq), were kidnapped and brought to the European continent, where they all died.[10][11][12][13]

The first treaty signed between Inuit and the Crown was in 1765 where NunatuKavut held negotiations over land use rights in Labrador. Around the same time, the Moravian Church set up missions supported by the English after altercations between NunatuKavut and colonial governments, with NunatuKavummuit's raids on whaling outposts ended by both treaties and the beginnings of harsh church control.

Canadian colonisation extended in to Inuit Nunangat via the lands claimed as Rupert's Land, North-Western Territory and Quebec, later including Newfoundland and Labrador. Rapid spread of diseases, material wealth, the Christian churches and Canadian policing[14] saw a rapid decline and collapse of Inuit Nunangat, from which it is still recovering.

Since European colonisers had little desire to settle much of Inuit Nunangat's territories, the violence experienced by southern First Nations was comparatively minimal in the North. However, assimilation policies including the wide-scale slaughter of community dogs between 1950 and 1970,[15] the High Arctic relocation[16][17] as well as forced participation within the Canadian Indian residential school system[18] has left Inuit society with language loss and intergenerational trauma.[19]

Today, Inuit Nunangat is overseen by the Inuit Tapiriit Kanatami (ᐃᓄᐃᑦ ᑕᐱᕇᑦ ᑲᓇᑕᒥ, meaning either "Inuit are united with Canada"[20] or "Inuit are united in Canada"[21]) which acts as a cultural centre piece and quasi-central government for Inuit affairs within Canada.

While Nunavut's confederation within Canada in 1999 via the Nunavut Act and Nunavut Land Claims Agreement is most visible, each of the regions of Inuit Nunangat as well as NunatuKavut have land claims with Canada. Nunangit came under the jurisdiction of the Inuvialuit Regional Corporation two years after the 1984 Inuvialuit Final Agreement, and Nunatsiavut was granted an autonomous government in 2005 after the 2002 Labrador Inuit Association proposal for a separate government. Beginning with a land claim in 1977, negotiations launched in 1988 between the Labrador Inuit Association, the governments of Newfoundland and Labrador and that of Canada. In Northern Quebec, the Makivik Corporation was established upon the James Bay and Northern Quebec Agreement signing in 1978, taking the mantle from the previous Nunavimmiut "Northern Quebec Inuit Association" (ᑯᐸᐃᒃ ᑕᕐᕋᖓᓂ ᐃᓄᐃᑦ ᑲᑐᔾᔨᖃᑎᒌᖏᑦ Kupaik Tarrangani Inuit Katujjiqatigiingit).

Finally, not formally within Inuit Nunangat is NunatuKavut whose treaty with the British extends back to 1765 and remains in force,[22] with the NunatuKavut Community Council (NCC) overseeing governance in this region.[23] 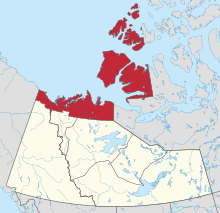 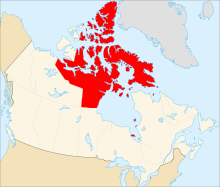 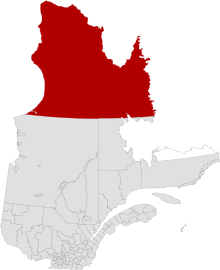 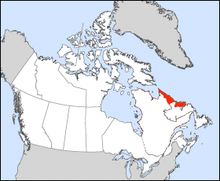 Inuvik is the regional centre for the Inuvik Region in the Northwest Territories and serves as a regional seat for the Inuvialuit Settlement Region. Iqaluit is the capital of Nunavut and Kuujjuaq for Nunavik. For Nunatsiavut, Hopedale (population 574[25]) is the legislative capital and Nain (population 1,125[26]) is the administrative capital.

There are six communities in the Inuvialuit Settlement Region, one town, Inuvik and five hamlets, Aklavik, Paulatuk, Sachs Harbour, Tuktoyaktuk and Ulukhaktok.

There are fourteen villages in Nunavik, Akulivik, Aupaluk, Inukjuak, Ivujivik, Kangiqsualujjuaq, Kangiqsujuaq, Kangirsuk, Kuujjuaq, Kuujjuarapik, Puvirnituq, Quaqtaq, Salluit, Tasiujaq and Umiujaq. All of these are northern village municipalities (TN) (Municipalité de village nordique) and, with the exception of Ivujivik and Puvirnituq, all have reserved lands associated.

There are five towns in Nunatsiavut, Hopedale, Makkovik, Nain, Postville and Rigolet.

Inuit are diverse peoples who share cultural and linguistic similarities. Moreover, they are a bimodal people, speaking both oral languages (Inuktut) and sign languages (Atgangmuurniq).

Spanning much of the North American Arctic, Inuit Nunangat is mostly above the tree line.

Inuit Tapiriit Kanatami released in 2019 their National Inuit Climate Change Strategy to combat and respond to the ecological collapse and its effects on Inuit and Inuit Nunangat.[29]