Founded on 23 February 1947, the organization promotes worldwide proprietary, industrial, and commercial standards. It is headquartered in Geneva, Switzerland,[3] and works in 164 countries.[1]

It was one of the first organizations granted general consultative status with the United Nations Economic and Social Council.

The International Organization for Standardization is an independent, non-governmental organization, the members of which are the standards organizations of the 164 member countries.[1] It is the world's largest developer of voluntary international standards and it facilitates world trade by providing common standards among nations. More than twenty thousand standards have been set, covering everything from manufactured products and technology to food safety, agriculture, and healthcare.[3]

Use of the standards aids in the creation of products and services that are safe, reliable, and of good quality. The standards help businesses increase productivity while minimizing errors and waste. By enabling products from different markets to be directly compared, they facilitate companies in entering new markets and assist in the development of global trade on a fair basis. The standards also serve to safeguard consumers and the end-users of products and services, ensuring that certified products conform to the minimum standards set internationally.[3]

Plaque marking the building in Prague where the ISO predecessor, the ISA, was founded

The organization today known as ISO, began in the 1920s as the International Federation of the National Standardizing Associations (ISA). It was suspended in 1942 during World War II,[4] but after the war ISA was approached by the recently formed United Nations Standards Coordinating Committee (UNSCC) with a proposal to form a new global standards body. In October 1946, ISA and UNSCC delegates from 25 countries met in London and agreed to join forces to create the new International Organization for Standardization. The new organization officially began operations in February 1947.[5]

The three official languages of the ISO are English, French, and Russian.[2]

The name of the organization in French is Organisation internationale de normalisation, and in Russian, Международная организация по стандартизации (Mezhdunarodnaya organizatsiya po standartizatsii). ISO is not an acronym. ISO gives this explanation of the name: "Because 'International Organization for Standardization' would have different acronyms in different languages (IOS in English, OIN in French), our founders decided to give it the short form ISO. ISO is derived from the Greek word isos (ίσος, meaning "equal"). Whatever the country, whatever the language, the short form of our name is always ISO."[6] During the founding meetings of the new organization, the Greek word explanation was not invoked, so this meaning may have been made public later, making it a backronym.[7]

Both the name ISO and the ISO logo are registered trademarks and their use is restricted.[8]

ISO is a voluntary organization whose members are recognized authorities on standards, each one representing one country. Members meet annually at a General Assembly to discuss the strategic objectives of ISO. The organization is coordinated by a central secretariat based in Geneva.[9]

A council with a rotating membership of 20 member bodies provides guidance and governance, including setting the annual budget of the central secretariat.[9][10]

The technical management board is responsible for more than 250 technical committees, who develop the ISO standards.[9][11][12][13]

ISO has formed two joint committees with the International Electrotechnical Commission (IEC) to develop standards and terminology in the areas of electrical and electronic related technologies.

ISO/IEC Joint Technical Committee 1 (JTC 1) was created in 1987 to "[d]evelop, maintain, promote and facilitate IT standards",[14] where IT refers to information technology.

ISO/IEC Joint Technical Committee 2 (JTC 2) was created in 2009 for the purpose of "[s]tandardization in the field of energy efficiency and renewable energy sources".[15]

Further information: Countries in the International Organization for Standardization 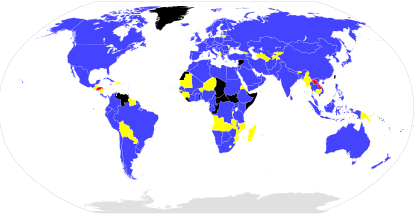 ISO is funded by a combination of:[16]

International Standards and other publications

These are designated using the format ISO[/IEC] [/ASTM] [IS] nnnnn[-p]:[yyyy] Title, where nnnnn is the number of the standard, p is an optional part number, yyyy is the year published, and Title describes the subject. IEC for International Electrotechnical Commission is included if the standard results from the work of ISO/IEC JTC1 (the ISO/IEC Joint Technical Committee). ASTM (American Society for Testing and Materials) is used for standards developed in cooperation with ASTM International. yyyy and IS are not used for an incomplete or unpublished standard and, under some circumstances, may be left off the title of a published work.

These are issued when a technical committee or subcommittee has collected data of a different kind from that normally published as an International Standard,[17] such as references and explanations. The naming conventions for these are the same as for standards, except TR prepended instead of IS in the report's name.

Technical specifications may be produced when "the subject in question is still under development or where for any other reason there is the future but not immediate possibility of an agreement to publish an International Standard". A publicly available specification is usually "an intermediate specification, published prior to the development of a full International Standard, or, in IEC may be a 'dual logo' publication published in collaboration with an external organization".[17] By convention, both types of specification are named in a manner similar to the organization's technical reports.

ISO also sometimes issues "technical corrigenda" (where "corrigenda" is the plural of corrigendum). These are amendments made to existing standards due to minor technical flaws, usability improvements, or limited-applicability extensions. They are generally issued with the expectation that the affected standard will be updated or withdrawn at its next scheduled review.[17]

These are meta-standards covering "matters related to international standardization".[17] They are named using the format "ISO[/IEC] Guide N:yyyy: Title".

ISO documents are copyrighted and ISO charges for most copies. It does not, however, charge for most draft copies of documents in electronic format. Although they are useful, care must be taken using these drafts as there is the possibility of substantial change before they become finalized as standards. Some standards by ISO and its official U.S. representative (and, via the U.S. National Committee, the International Electrotechnical Commission) are made freely available.[19][20]

A standard published by ISO/IEC is the last stage of a long process that commonly starts with the proposal of new work within a committee. Some abbreviations used for marking a standard with its status are:[21][22][23][24][25][26][27]

International Standards are developed by ISO technical committees (TC) and subcommittees (SC) by a process with six steps:[23][30]

It is possible to omit certain stages, if there is a document with a certain degree of maturity at the start of a standardization project, for example, a standard developed by another organization. ISO/IEC directives also allow the so-called "Fast-track procedure". In this procedure a document is submitted directly for approval as a draft International Standard (DIS) to the ISO member bodies or as a final draft International Standard (FDIS), if the document was developed by an international standardizing body recognized by the ISO Council.[23]

The first step—a proposal of work (New Proposal) is approved at the relevant subcommittee or technical committee (e.g., SC29 and JTC1 respectively in the case of Moving Picture Experts Group – ISO/IEC JTC1/SC29/WG11). A working group (WG) of experts is set up by the TC/SC for the preparation of a working draft. When the scope of a new work is sufficiently clarified, some of the working groups (e.g., MPEG) usually make open request for proposals—known as a "call for proposals". The first document that is produced, for example, for audio and video coding standards is called a verification model (VM) (previously also called a "simulation and test model"). When a sufficient confidence in the stability of the standard under development is reached, a working draft (WD) is produced. This is in the form of a standard, but is kept internal to working group for revision. When a working draft is sufficiently solid and the working group is satisfied that it has developed the best technical solution to the problem being addressed, it becomes a committee draft (CD). If it is required, it is then sent to the P-members of the TC/SC (national bodies) for ballot.

International Workshop Agreements (IWAs) follow a slightly different process outside the usual committee system but overseen by the ISO, allowing "key industry players to negotiate in an open workshop environment" in order to shape the IWA standard.[32]

On occasion, the fact that many of the ISO-created standards are ubiquitous has led to common use of "ISO" to describe the product that conforms to a standard. Some examples of this are:

With the exception of a small number of isolated standards,[19] normally ISO standards are not available free of charge, but for a purchase fee,[33] which has been seen by some as unaffordable by small open source projects.[34]

The ISO/IEC JTC1 fast-track procedures ("Fast-track" as used by OOXML and "PAS" as used by OpenDocument) have garnered criticism in relation to the standardization of Office Open XML (ISO/IEC 29500). Martin Bryan, outgoing convenor of ISO/IEC JTC1/SC34 WG1, is quoted as saying:[35]

I would recommend my successor that it is perhaps time to pass WG1’s outstanding standards over to OASIS, where they can get approval in less than a year and then do a PAS submission to ISO, which will get a lot more attention and be approved much faster than standards currently can be within WG1.

The disparity of rules for PAS, Fast-Track and ISO committee generated standards is fast making ISO a laughing stock in IT circles. The days of open standards development are fast disappearing. Instead we are getting "standardization by corporation".

The computer security entrepreneur and Ubuntu founder, Mark Shuttleworth, commented on the Standardization of Office Open XML process by saying: "I think it de-values the confidence people have in the standards setting process", and alleged that ISO did not carry out its responsibility. He also noted that Microsoft had intensely lobbied many countries that traditionally had not participated in ISO and stacked technical committees with Microsoft employees, solution providers, and resellers sympathetic to Office Open XML:[36]

When you have a process built on trust and when that trust is abused, ISO should halt the process... ISO is an engineering old boys club and these things are boring so you have to have a lot of passion … then suddenly you have an investment of a lot of money and lobbying and you get artificial results. The process is not set up to deal with intensive corporate lobbying and so you end up with something being a standard that is not clear.