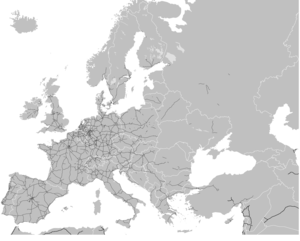 The international E-road network is a numbering system for roads in Europe developed by the United Nations Economic Commission for Europe (UNECE). The network is numbered from E1 up and its roads cross national borders. It also reaches Central Asian countries like Kyrgyzstan, since they are members of the UNECE.

Other continents have similar international road networks, e.g., the Pan-American Highway in the Americas, the Trans-African Highway network, and the Asian Highway Network.

UNECE was formed in 1947, and their first major act to improve transport was a joint UN declaration no. 1264, the Declaration on the Construction of Main International Traffic Arteries,[1][2] signed in Geneva on 16 September 1950, which defined the first E-road network. Originally it was envisaged that the E-road network would be a motorway system comparable to the US Interstate Highway System.[3] The declaration was amended several times until 15 November 1975, when it was replaced by the European Agreement on Main International Traffic Arteries or "AGR",[4] which set up a route numbering system and improved standards for roads in the list. The AGR last went through a major change in 1992 and in 2001 was extended into Central Asia to include the Caucasus nations.[3] There were several minor revisions since, last in 2008 (as of 2009[update]).

These were the historical roads before 1975:

Intersection of E42 and E451 near Frankfurt Airport

The route numbering system is as follows:[4]

In the first established and approved version, the road numbers were well ordered. Since then a number of exceptions to this principle have been allowed.

Two Class-A roads, E6 and E4 were originally scheduled to be renamed into E47 and E55, respectively. However, since Sweden and Norway have integrated the E-roads into their national networks, signposted as E6 and E4 throughout, a decision was made to officially keep the pre-1992 numbers for the roads in those two countries. These exceptions were granted because of the excessive expense connected with re-signing not only the long routes themselves, but also the associated road network in the area. The new numbers are, however, used from Denmark and southward, though, as do other European routes within Scandinavia. These two roads are the most conspicuous exceptions to the rule that even numbers signify west-to-east E-roads.

These irregularities exist just because it is hard to maintain good order when extending the network, and the UNECE does not want to change road numbers unnecessarily.

Because the Socialist People's Republic of Albania refused to participate in international treaties such as the AGR, it was conspicuously excluded from the route scheme, with E65 and E90 making noticeable detours to go around it. In the 1990s, Albania opened up to the rest of Europe, but only ratified the AGR in August 2006, so its integration into the E-road network remains weak.

Where the European routes are signed, green signs with white numbers are used.

The E201 in the Republic of Ireland.

There are different strategies for determining how frequently to signpost the roads.

The following design standards should be applied to Euroroutes unless there are exceptional circumstances (such as mountain passes etc.):[4]

These requirements are meant to be followed for road construction. When new E-roads have been added these requirements have not been followed stringently. For example, the E45 in Sweden, added in 2006, has long parts with 6 m (20 ft) width or the E22 in eastern Europe forcing drivers to slow down to 30 km/h (20 mph) by taking the route through villages. In Norway, parts of the E10 are 5 m (16 ft) wide and in Central Asia even some gravel roads have been included.

In Belgium, for example, motorway E-numbers have taken on the same kind of persistent cultural integration and significance as M-numbers in the UK, or Interstate numbers in the United States. Local businesses will refer to, or even incorporate the road designator in their business name. The annual road cycling race "E3 Harelbeke" takes part of its name from the former E3 (the part between Antwerp and Lille was renamed E17 in 1992). The same applies to the retail chain "E5-mode" (E5-fashion) that started with shops easily accessible from the former E5 (renamed E40 in 1992).

Notes to the listings

In the road listings below,[4] a dash ('–') indicates a land road connection between two towns/cities—the normal case—while an ellipsis ('…') denotes a stretch across water. There aren't ferry connections at all of these places and operating ferry connections are usually run by private companies without support from the respective governments, i.e. may cease operating at any time.

The E-road network in Belarus.

The E-road network in Belgium. 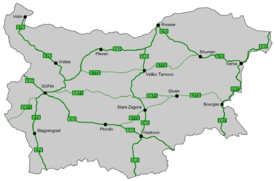 The E-road network in Bulgaria. 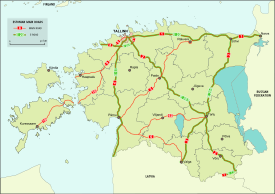 Main and E-roads in Estonia.

The E-road network in Finland.

The E-road network in Georgia. 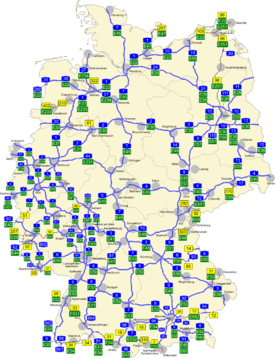 The E-road network in Germany. 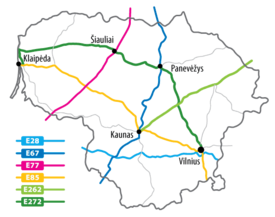 The E-road network in Lithuania. 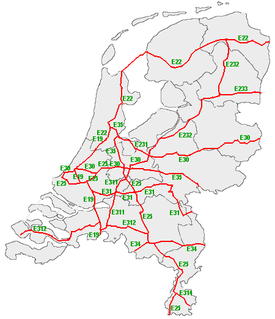 The E-road network in the Netherlands. 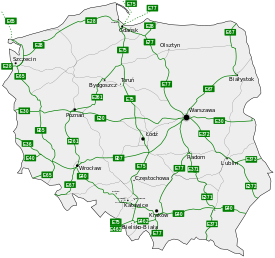 The E-road network in Poland. 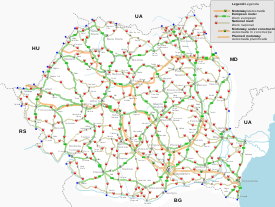 The E-road network in Romania.

The E-road network in Russia (includes the disputed Crimea).

The E-road network in Turkey. 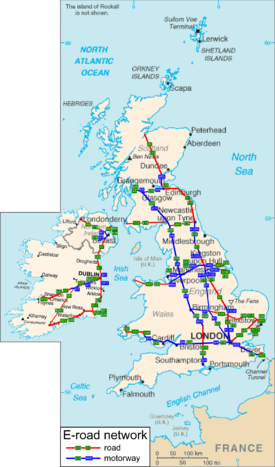 The E-road network in the United Kingdom and Ireland.

The E-road network in Ukraine (includes the disputed Crimea).