The International Centre for Migration Policy Development (ICMPD) was established by Austria and Switzerland in 1993 and has since grown to 18 member states.[1] ICMPD was founded to carry out research, projects and activities on migration-related issues and to provide policy recommendations to the governmental agencies of states, as well as to external governmental and intergovernmental agencies. ICMPD also has observer status at the United Nations.[2][3] Although ICMPD has global operations, it is primarily focused on the European area and is headquartered in Vienna, Austria.[4] ICMPD is currently composed of 18 Member States,[5][6] around 340 staff members, a mission in Brussels, as well as representatives in Europe, Northern Africa and the Middle East.[7]

ICMPD cooperates with governments, other international organisations, research institutes and members of civil society in developing policies in migration-related areas, as well organising trainings, etc. to transfer know-how on dealing with migration issues. The purpose of ICMPD is to promote innovative, comprehensive and sustainable migration policies and to function as a service exchange mechanism for governments and organisations.

ICMPD has vast experience in bridging the gap between theory and practice. According to that ICMPD provides policy makers and politicians with necessary groundwork to take decisions. Furthermore ICMPD is present on the ground, with its capacity building activities in various areas of migration management.

Making migration and mobility of people orderly, safe and regular, including through the implementation of planned and well managed migration policies. 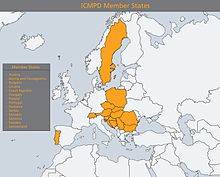