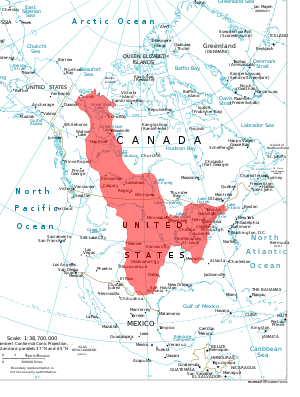 The Interior Plains are highlighted in red.

The Interior Plains are a vast physiographic region that spreads across the Laurentian craton of central North America, extending from the Gulf Coast region to the Arctic Ocean along the east flank of the Rocky Mountains. In Canada, it separates the Rocky Mountains from the Canadian Shield, while in the U.S., it includes the Great Plains of the west and the Tallgrass prairie region to the south of the Great Lakes extending east to the Appalachian Plateau region.[1]

This area was originally formed when cratons collided and welded together 1.8–1.9 billion years ago in the Trans-Hudson orogeny during the Paleoproterozoic Era.

Precambrian metamorphic and igneous rocks now form the basement of the Interior Plains and make up the stable nucleus of North America. With the exception of the Black Hills of South Dakota, the entire region has low relief, reflecting more than 500 million years of relative tectonic stability.[2]

The Interior Plains were often covered by shallow inland seas. Sediments from the shield and the Rocky Mountains were deposited in these seas over millions of years. Eventually, the sediments were compressed by the weight of the layers above into sedimentary rock. Part of the sedimentary rock deposited in these areas consists of coral reefs that formed close to the surface of seas during the Paleozoic Era.[1]

Throughout the Paleozoic and Mesozoic eras, the mostly low-lying Interior Plains region remained relatively unaffected by the mountain-building tectonic collisions occurring on margins of the continent. During much of the Mesozoic Era, the North American continental interior were mostly well above sea level, with two major exceptions. During part of the Jurassic, rising seas flooded the low-lying areas of the continent, forming the Sundance Sea; in the Cretaceous, much of the Interior Plains region lay submerged beneath the Western Interior Seaway.[2]