The Pakistani Instrument of Surrender (Bengali: পাকিস্তানের আত্মসমর্পণের দলিল, Pākistānēr Atmasamarpaṇēr Dalil ) was a written agreement that enabled the surrender of 93,000 soliders of the Pakistan Armed Forces Eastern Command on 16 December 1971, thereby ending the Bangladesh Liberation War and the creation of the nation of Bangladesh.

The day is commemorated as Victory Day, a national holiday, in Bangladesh; and as Vijay Diwas on the Indian military calendar. 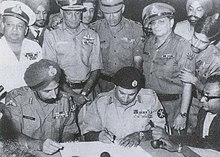 The surrender ceremony took place at the Ramna Race Course garden in Dhaka (then the capital of East Pakistan, now the capital of Bangladesh) on 16 December 1971. Lieutenant-General A A K Niazi, Martial Law Administrator of East Pakistan, surrendered to Lieutenant General Jagjit Singh Aurora, Joint Commander of Indian and Bangladeshi Forces. Air Commodore A. K. Khandker, Deputy Chief of Staff of the Bangladesh Forces, represented the Provisional Government of Bangladesh at the surrender.[1]

Aurora accepted the surrender without a word, while the crowd on the race course erupted in celebrations.[2]

Text of the Instrument

The text of the surrender is now a public property of Indian, Bangladeshi and Pakistani governments and the text of the document can be seen on display in the National Museum in New Delhi. The text of the Instrument of Surrender document was as follows:[3][4]