This organization has branched out in over 45 different countries with 86 centres devoted to the Spanish and Hispanic American culture and Spanish Language.[2] Article 3 of Law 7/1991, created by the Instituto Cervantes on March 21, explains that the ultimate goals of the Institute are to promote the education, the study and the use of Spanish universally as a second language, to support the methods and activities that would help the process of Spanish language education, and to contribute to the advancement of the Spanish and Hispanic American cultures throughout non-Spanish-speaking countries.[3][4]

The administration of the Cervantes Institute is subdivided into three parts. A commitment and interest in planning the activities and direction of the Institute are managed by a high-profile membership.[5]

Centro Virtual Cervantes is an online service that was created in December 1997 by the Instituto Cervantes of Spain to contribute to the diffusion of the Spanish language and Hispanic cultures. It became one of the most important reference sites devoted to Spanish language and culture, having reached an average of over 100,000 visitors a month, including both professionals and the general public.[6] It offers resources and services to teachers, students, translators, journalists and other professionals involved with the Spanish language, and as well as to Hispanists throughout the world, who study Hispanic cultures, and to any person who is interested in the language and Hispanic cultures.[2] It also includes announcements of cultural events (Actos Culturales), four discussion forums, each of which focuses on a specific topic, and the language classroom, Aula de Lengua, designed for both teachers and learners of Spanish.[6] The Instituto Cervantes also has a virtual presence in the 3D virtual world Second Life.[citation needed]

On 13 December 2004, the Cervantes Institute formed its Centro de Formación de Profesores in its headquarters, located in Alcalá de Henares, where Cervantes was born. This institution was founded to encourage the teaching of Spanish as a foreign language and to provide useful resources to its members. Throughout the year, it organises the specific activities and programmes for the centre, with several different goals, which include teaching, providing the resources to the teachers to use in their education field, and developing specialised knowledge of the Spanish language for educational purposes. The Centre supports the future teachers of Spanish through its 'Master of Education in Spanish as a Foreign Language', in collaboration with the International University Menéndez Pelayo. For teachers already involved in teaching, the Centre provides advanced activities that produce a deeper knowledge, focusing on research or discussion in the classroom, and improving the students’ skills in Spanish language for them to become responsive in any communicational situations.[2]

The Automatic Translator Service of the Cervantes Institute, "Portal de las Tecnologías Lingüisticas en España", was launched by the Cervantes Institute on 10 January 2005.[2][7] It is a free service of machine translation sponsored by Telefónica. Since its launch, demand has steadily increased monthly to 55%,[7] and it has performed more than 582,000 free translations.[7] The Cervantes Institute's purpose in creating this service was to facilitate the access of Spanish to those information technology contents developed in other languages, and so people who speak other languages can have access to contents that are only available in Spanish.[7] This service permits translation of texts and text files, as well as web pages, from Spanish to Catalan, French, Galician, English or Portuguese and vice versa.[2] The pairs of language percentages used are as follows: English–Spanish, 23.47% of the total; Spanish–Catalan, 21.12%; Spanish–English, 13.64%; Portuguese–Spanish, 12.63%; Spanish–Portuguese, 10.39%; Catalan–Spanish, 6.48%; Spanish–French, 6.24%, and French–Spanish, 6.03%.[7]

Since 1998, the Instituto Cervantes has published the annual El español en el mundo highlighting the state of Spanish in the world, and current trends. The Instituto has also run the Internet-based Centro Virtual Cervantes since 1997.

In 2005, along with the Alliance française, the Società Dante Alighieri, the British Council, the Goethe-Institut, and the Instituto Camões, the Instituto Cervantes was awarded the Prince of Asturias Award for outstanding achievements in communications and the humanities. 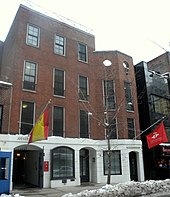 The Instituto Cervantes has developed its educational project on a system of local institutions and centres: