Infrastructure is the set of fundamental facilities and systems serving a country, city, or other area,[1] including the services and facilities necessary for its economy to function.[2] Infrastructure is composed of public and private physical structures such as roads, railways, bridges, tunnels, water supply, sewers, electrical grids, and telecommunications (including Internet connectivity and broadband access). In general, infrastructure has been defined as "the physical components of interrelated systems providing commodities and services essential to enable, sustain, or enhance societal living conditions".[3] 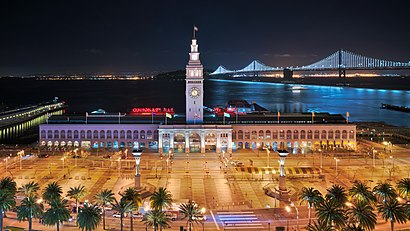 The word infrastructure has been used in French since 1875 and in English since 1887, originally meaning "The installations that form the basis for any operation or system".[5][6] The word was imported from French, where it was already used for establishing a roadbed of substrate material, required before railroad tracks or constructed pavement could be laid on top of it. The word is a combination of the Latin prefix "infra", meaning "below", as many of these constructions are underground (for example, tunnels, water and gas systems, and railways), and the French word "structure" (derived from the Latin word "structure"). The army use of the term achieved currency in the United States after the formation of NATO in the 1940s, and by 1970 was adopted by urban planners in its modern civilian sense.[7]

"... both specific functional modes – highways, streets, roads, and bridges; mass transit; airports and airways; water supply and water resources; wastewater management; solid-waste treatment and disposal; electric power generation and transmission; telecommunications; and hazardous waste management – and the combined system these modal elements comprise. A comprehension of infrastructure spans not only these public works facilities, but also the operating procedures, management practices, and development policies that interact together with societal demand and the physical world to facilitate the transport of people and goods, provision of water for drinking and a variety of other uses, safe disposal of society's waste products, provision of energy where it is needed, and transmission of information within and between communities."[8]

Institutional infrastructure branches from the term "economic constitution". According to Gianpiero Torrisi, institutional infrastructure is the object of economic and legal policy. It compromises the grown and sets norms.[10] It refers to the degree of actual equal treatment of equal economic data and determines the framework within which economic agents may formulate their own economic plans and carry them out in co-operation with others.

Social infrastructure can be broadly defined as the construction and maintenance of facilities that support social services.[13] Social infrastructures are created to increase social comfort and act on economic activity. These being schools, parks and playgrounds, structures for public safety, waste disposal plants, hospitals, sports area, etc.[10]

Basic infrastructure refers to main railways, roads, canals, harbors and docks, the electromagnetic telegraph, drainage, dikes, and land reclamation.[10] It consist of the more well-known features of infrastructure. The things in the world we come across every day (buildings, roads, docks, etc.).

Complementary infrastructure refers to things like light railways, tramways, gas/electricity/water supply, etc.[10] To complement something, means to bring to perfection or complete it. So, complementary infrastructure deals with the little parts of the engineering world the bring more life.[clarification needed] The lights on the sidewalks, the landscaping around buildings, the benches for pedestrians to rest, etc.

The term infrastructure may be confused with the following overlapping or related concepts.

Infrastructure may be owned and managed by governments or by private companies, such as sole public utility or railway companies. Generally, most roads, major airports and other ports, water distribution systems, and sewage networks are publicly owned, whereas most energy and telecommunications networks are privately owned.[citation needed] Publicly owned infrastructure may be paid for from taxes, tolls, or metered user fees, whereas private infrastructure is generally paid for by metered user fees.[citation needed] Major investment projects are generally financed by the issuance of long-term bonds.[citation needed]

Engineers generally limit the term "infrastructure" to describe fixed assets that are in the form of a large network; in other words, hard infrastructure.[citation needed] Efforts to devise more generic definitions of infrastructures have typically referred to the network aspects of most of the structures, and to the accumulated value of investments in the networks as assets.[citation needed] One such definition from 1998 defined infrastructure as the network of assets "where the system as a whole is intended to be maintained indefinitely at a specified standard of service by the continuing replacement and refurbishment of its components".[18]

Civil defense planners and developmental economists generally refer to both hard and soft infrastructure, including public services such as schools and hospitals, emergency services such as police and fire fighting, and basic financial services. The notion of infrastructure-based development combining long-term infrastructure investments by government agencies at central and regional levels with public private partnerships has proven popular among economists in Asia (notably Singapore and China), mainland Europe, and Latin America.

Military infrastructure is the buildings and permanent installations necessary for the support of military forces, whether they are stationed in bases, being deployed or engaged in operations. For example, barracks, headquarters, airfields, communications facilities, stores of military equipment, port installations, and maintenance stations.[19]

In the developing world

According to researchers at the Overseas Development Institute, the lack of infrastructure in many developing countries represents one of the most significant limitations to economic growth and achievement of the Millennium Development Goals (MDGs). Infrastructure investments and maintenance can be very expensive, especially in such areas as landlocked, rural and sparsely populated countries in Africa. It has been argued that infrastructure investments contributed to more than half of Africa's improved growth performance between 1990 and 2005, and increased investment is necessary to maintain growth and tackle poverty. The returns to investment in infrastructure are very significant, with on average thirty to forty percent returns for telecommunications (ICT) investments, over forty percent for electricity generation, and eighty percent for roads.[20]

The demand for infrastructure, both by consumers and by companies is much higher than the amount invested.[20] There are severe constraints on the supply side of the provision of infrastructure in Asia.[21] The infrastructure financing gap between what is invested in Asia-Pacific (around US$48 billion) and what is needed (US$228 billion) is around US$180 billion every year.[20]

In Latin America, three percent of GDP (around US$71 billion) would need to be invested in infrastructure in order to satisfy demand, yet in 2005, for example, only around two percent was invested leaving a financing gap of approximately US$24 billion.[20]

The source of financing varies significantly across sectors. Some sectors are dominated by government spending, others by overseas development aid (ODA), and yet others by private investors.[20] In California, infrastructure financing districts are established by local governments to pay for physical facilities and services within a specified area by using property tax increases.[22] In order to facilitate investment of the private sector in developing countries' infrastructure markets, it is necessary to design risk-allocation mechanisms more carefully, given the higher risks of their markets.[23]

In Sub-Saharan Africa, governments spend around US$9.4 billion out of a total of US$24.9 billion. In irrigation, governments represent almost all spending. In transport and energy a majority of investment is government spending. In ICT and water supply and sanitation, the private sector represents the majority of capital expenditure. Overall, between them aid, the private sector, and non-OECD financiers exceed government spending. The private sector spending alone equals state capital expenditure, though the majority is focused on ICT infrastructure investments. External financing increased in the 2000s (decade) and in Africa alone external infrastructure investments increased from US$7 billion in 2002 to US$27 billion in 2009. China, in particular, has emerged as an important investor.[20]