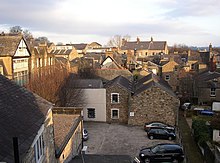 Urban infill, Lancaster, England. The small buildings in the centre stand on a former garden.

In urban planning, infill is the rededication of land in an urban environment, usually open-space, to new construction.[1] Infill also applies within an urban polity to construction on any undeveloped land that is not on the urban margin. The slightly broader term "land recycling" is sometimes used instead. Infill has been promoted as an economical use of existing infrastructure and a remedy for urban sprawl.[2] Its detractors view it as overloading urban services, including increased traffic congestion and pollution, and decreasing urban green-space.[3][4]

In the urban planning and development industries, infill has been defined as the use of land within a built-up area for further construction, especially as part of a community redevelopment or growth management program or as part of smart growth.[5][6]

It focuses on the reuse and repositioning of obsolete or underutilized buildings and sites. This type of development is essential to renew blighted neighborhoods and to knit them back together with more prosperous communities.[7]

Redevelopment or land recycling is development that occurs on previously developed land. Infill buildings are constructed on vacant or underused property or between existing buildings.[8]

Urban Infill Projects can also be considered as a means of sustainable land development close to a city's urban core. Splitting lots off from existing properties is currently the most popular means of urban infill development. [9]

Although urban infill is an appealing tool for community redevelopment and growth management, it is often far more costly for developers to develop land within the city than it is to develop on the periphery, in suburban greenfield land.[10] Costs for developers include acquiring land, removing existing structures,[11] and testing for and cleaning up any environmental contamination.[10]

Scholars have argued that infill development is more financially feasible for development when it occurs on a large plot of land, with several acres.[11] Large-scale development benefits from what economists call economies of scale and reduces the surrounding negative influences of neighborhood blight, crime, or poor schools.[11] However, large scale infill development is often difficult in a blighted neighborhood for several reasons, such as the difficulties in acquiring land and in gaining community support.

Amassing land is one challenge that infill development poses, but greenfield development does not. Neighborhoods that are targets for infill often have parcels of blighted land scattered among places of residence. Developers must be persistent to amass land parcel by parcel and often find resistance from landowners in the target area.[11] One way to approach that problem is for city management to use eminent domain to claim land. However, that is often unpopular with city management and neighborhood residents. Developers must also deal with regulatory barriers, visit numerous government offices for permitting, interact with a city management that is frequently unwilling to use eminent domain to remove current residents, and generally engage in public-private partnerships with local government.[11]

Developers also meet with high social goal barriers in which the local officials and residents are not interested in the same type of development. Although citizen involvement has been found to facilitate the development of brownfield land, residents in blighted neighborhoods often want to convert vacant lots to parks or recreational facilities, but external actors seek to build apartment complexes, commercial shopping centers, or industrial sites.[4][12]

Suburban infill is the development of land in existing suburban areas that was left vacant during the development of the suburb. It is one of the tenets of New Urbanism and smart growth, trends that urge densification to reduce the need for automobiles, encourage walking, and save energy ultimately.[13] In New Urbanism, an exception to infill is the practice of urban agriculture in which land in the urban or suburban area is retained to grow food for local consumption.

Infill housing is the insertion of additional housing units into an already-approved subdivision or neighborhood. They can be provided as additional units built on the same lot, by dividing existing homes into multiple units, or by creating new residential lots by further subdivision or lot line adjustments. Units may also be built on vacant lots.

As with other new construction, structures built as infill may clash architecturally with older, existing buildings.