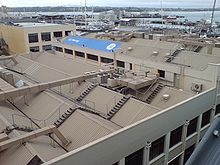 Air conditioning and exhaust plant on a rooftop in Auckland, New Zealand

An old and rusty Cornovaglia boiler, used during the Industrial Revolution: steam was and still is an important input for some industrial processes.

Physical plant, mechanical plant or industrial plant (and where context is given, often just plant) refers to the necessary infrastructure used in operation and maintenance of a given facility. The operation of these facilities, or the department of an organization which does so, is called "plant operations" or facility management. Industrial plant should not be confused with "manufacturing plant" in the sense of "a factory".

HVAC plant usually includes air conditioning (both heating and cooling systems and ventilation) and other mechanical systems. It often also includes the maintenance of other systems, such as plumbing and lighting. The facility itself may be an office building, a school campus, military base, apartment complex, or the like.

In broadcast engineering, the term transmitter plant is the part of the physical plant associated with the transmitter and its controls and inputs, the studio/transmitter link (if the radio studio is off-site),[1] the radio antenna and radomes, feedline and desiccation/nitrogen system, broadcast tower and building, tower lighting, generator, and air conditioning. These are often monitored by an automatic transmission system, which reports conditions via telemetry (transmitter/studio link).[citation needed]