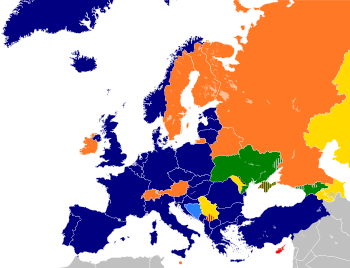 Map of NATO in Europe

Individual Partnership Action Plans (IPAP) are plans developed between NATO and different countries which outline the objectives and the communication framework for dialogue and cooperation between both parties. NATO launched the IPAPs initiative at the 2002 Prague Summit.

Individual Partnership Action Plans (IPAPs) are in implementation with the following countries:[1]

Armenia,[3][4] Azerbaijan,[5] Kazakhstan,[6] Moldova[7] and Serbia[8][9] have stated they have no current intention to join NATO, but all of them participate in NATO's Partnership for Peace program. Georgia and Ukraine are currently undergoing Intensified Dialogue for NATO membership[10] while Bosnia and Herzegovina[11] has a Membership Action Plan and is actively working towards joining NATO.

Ukraine's relationship with NATO is governed by the NATO–Ukraine Action Plan, adopted on 22 November 2002.[12][13] In April 2005, Ukraine entered into Intensified Dialogue with NATO,[14] and during the 2008 Bucharest summit NATO declared that Ukraine could become a member of NATO when it wants to join and meets the criteria for accession.[15] However, by 2010 Ukraine had announced that it no longer had NATO membership as a goal under the foreign policy of new President Viktor Yanukovych.[16][17] Following months of Euromaidan street protests that began because of his refusal to sign an Association Agreement with the European Union in favor of deals from Russia, President Yanukovych was overthrown. In response to Russian involvement in eastern Ukraine and the alleged deployment of Russian troops on Ukrainian soil, the Ukrainian Prime Minister Yatsenyuk announced his intentions to resume the bid for NATO integration in August 2014,[18] and in December 2014, Ukraine's parliament voted to drop non-aligned status that was passed in 2010.[19]