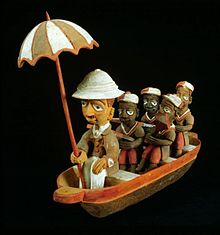 Indirect rule was a system of governance used by the British and French to control parts of their colonial empires, particularly in Africa and Asia, through pre-existing indigenous power structures. These dependencies were often called "protectorates" or "trucial states". By this system, the day-to-day government and administration of areas both small and large were left in the hands of traditional rulers, who gained prestige and the stability and protection afforded by the Pax Britannica (in the case of British territories), at the cost of losing control of their external affairs, and often of taxation, communications, and other matters, usually with a small number of European "advisors" effectively overseeing the government of large numbers of people spread over extensive areas.[1]

Some British colonies were ruled directly by the Colonial Office in London, while others were ruled indirectly through local rulers who are supervised behind the scenes by British advisors. In 1890 Zanzibar became a protectorate (not a colony) of Britain. Prime minister Salisbury explained his position:

The condition of a protected dependency is more acceptable to the half civilized races, and more suitable for them than direct dominion. It is cheaper, simpler, less wounding to their self-esteem, gives them more career as public officials, and spares of unnecessary contact with white men.[2]

The Princely States of India were ruled indirectly.[3] So too was much of the West African holdings.[4]

The ideological underpinnings, as well as the practical application, of indirect rule in Uganda and Nigeria is usually traced to the work of Frederick Lugard, the High Commissioner of the Protectorate of Northern Nigeria from 1899 to 1906. Indirect rule was by no means a new idea at the time, for it had been in use in ruling empires throughout history. For instance, in addition to India and Uganda, it had been practiced in the Songhai and Ashanti empires.

In the lands of the Sokoto Caliphate, conquered by the British Empire at the turn of the century, Lugard instituted a system whereby external, military, and tax control was operated by the British, while most every other aspect of life was left to local pre-British aristocracies who may have sided with the British during or after their conquest. The theory behind this solution to a very practical problem (a problem referred to as 'The Native Problem' by Mahmood Mamdani in his work Citizen and Subject) of domination by a tiny group of foreigners of huge populations is laid out in Lugard's influential work, The Dual Mandate in British Tropical Africa. Lugard copied the numerous empires before his time who had created and developed the indirect rule system. he is only noted for the ruling system because he first published a book about this system of administration called “The Dual Mandate in Tropical Africa,”

According to the British, Indirect Rule was a political doctrine which held that the Europeans and Africans were culturally different to this extent, Africans had to be ruled through the Africans own institution. To achieve this objective:

It has been pointed out that the British were not prepared to pay for colonial administration, though interested in exploiting the colonies; neither had got enough resources to finance it. This economic question coupled with the shortage of or lack of White personnel in Africa at the time convinced the British that it would be cheaper to use the traditional institutions to achieve the same objective. The nature and operation of Indirect rule in Northern Nigerian, amply confirm these contentions. When Lord Lugard conquered the Sokoto Caliphate of Northern Nigeria, in early twentieth century, his limited resources in terms of men and money, made it impracticable for him to rule that vast territory. Fortunately for him, however, the Sokoto Caliphate already possessed a highly developed and efficient system of administration headed by emirs, with the Sultan of Sokoto as the supreme head. The hierarchical nature of the political structure was ideal for Indirect Rule because the British could control the emirs and the emirs in turn could control their people.[5]

The largest application of Indirect rule was in British Asia, in hundreds of pre-colonial states, first seen at work under the East India Company's system of subsidiary alliances in the Indian subcontinent. The areas thus brought into the British sphere of influence became known as the Indian Princely States. Subsequently, the same principle was applied in strategic regions on the sea routes to India, especially in the Persian Gulf protected states.

In the British colonies, the laws were typically made by a British Governor and legislative council, but in the protectorates and princely states local rulers retained their traditional administrative authority and ability to legislate, subject to British control of certain areas. Indirect rule was particularly effective in enabling the British to exploit natural resources and raw materials of vast subordinate nations. The establishment of naval and military bases in strategic points around the globe maintained the necessary power to underpin such control.

Naaba Koom II, king of the Mossi in French Upper Volta, pictured in 1930. Preservation of precolonial political units was the basis of indirect rule in British and French empires

Indirect rule was cheaper and easier for the European powers and, in particular, it required fewer administrators, but had a number of problems. In many cases, European authorities empowered local traditional leaders, as in the case of the monarchy of Uganda, but if no suitable leader could be found (in the traditional Western sense of the term), the Europeans would simply choose local rulers to suit them.[6] This was the case in Kenya and Southern Nigeria, and the new leaders, often called "warrant chiefs", were not always supported by the local population. The European ruling classes also often chose local leaders with similar traits to their own, despite these traits not being suited to native leadership. Many were conservative elders, and thus indirect rule fostered a conservative outlook among the indigenous population and marginalised the young intelligentsia. Written laws, which replaced oral laws, were less flexible to the changing social nature, old customs of retribution and justice were removed or banned, and the removal of more violent punishments in some areas led to an increase in crime.[citation needed] Furthermore, leaders empowered by the governments of European powers were often not familiar with their new tasks, such as recruitment and tax.[7]

From the early 20th century, French and British writers helped establish a dichotomy between British Indirect rule, exemplified by the Indian princely states and by Lord Lugard's writings on the administration of northern Nigeria, and French colonial direct rule. As with British theorists, French colonial officials like Félix Eboué or Robert Delavignette[8] wrote and argued throughout the first half of the 20th century for a distinct French style of rule that was centralized, uniform, and aimed at assimilating colonial subjects into the French polity.[9][10][11] French rule, sometimes labeled Jacobin, was said in these writings to be based on the twin ideologies of the centralized unitary French government of the Metropole, with the French colonial ideology of Assimilation. Colonial Assimilation argued that French law and citizenship was based on universal values that came from the French Revolution. Mirroring French domestic citizenship law, French colonial law allowed for anyone who could prove themselves culturally French (the "Évolués") to become equal French citizens.[12][13][14][15][16] In French West Africa, only parts of the Senegalese "Four Communes" ever extended French citizenship outside a few educated African elite.[17][18] This was contrasted with British Indirect Rule, which never foresaw subject Protectorates becoming legally assimilated into "the home nations".

Academics since the 1970s have problematised the Direct versus Indirect Rule dichotomy,[23] arguing the systems were in practice intermingled in both British and French colonial governance, and that the perception of indirect rule was sometimes promoted to justify quite direct rule structures.[24][25]

Mahmood Mamdani and other academics[26][27] have discussed extensively how both Direct and Indirect rule were attempts to implement identical goals of foreign rule, but how the "Indirect" strategy helped to create ethnic and racial cleavages within ruled societies which persist in hostile communal relations and dysfunctional strategies of government.[28][29] Mamdani himself famously described indirect rule as "decentralised despotism".[30]

Some political scientists have even expanded the debate on how direct versus indirect rule experiences continue to affect contemporary governance into how governments which have never experienced colonialism rule.[31]