In linguistics, an object is any of several types of arguments.[1] In subject-prominent, nominative-accusative languages such as English, a transitive verb typically distinguishes between its subject and any of its objects, which can include but are not limited to direct objects,[2] indirect objects,[3] and arguments of adpositions (prepositions or postpositions); the latter are more accurately termed oblique arguments, thus including other arguments not covered by core grammatical roles, such as those governed by case morphology (as in languages such as Latin) or relational nouns (as is typical for members of the Mesoamerican Linguistic Area). In ergative-absolutive languages, for example most Australian Aboriginal languages, the term "subject" is ambiguous, and thus the term "agent" is often used instead to contrast with "object", such that basic word order is often spoken of in terms such as Agent-Object-Verb (AOV) instead of Subject-Object-Verb (SOV).[4] Topic-prominent languages, such as Mandarin, focus their grammars less on the subject-object or agent-object dichotomies but rather on the pragmatic dichotomy of topic and comment.[5]

In English traditional grammar types, three types of object are acknowledged: direct objects, indirect objects, and objects of prepositions. These object types are illustrated in the following table:

Note that indirect objects are frequently expressed as objects of prepositions, complicating the traditional typology; e.g. "I gave salt to the man."

Some Chinese verbs can have two direct objects, one being more closely bound to the verb than the other; these may be called "inner" and "outer" objects.

Secundative languages lack a distinction between direct and indirect objects, but rather distinguish primary and secondary objects.[6] Many African languages fall into this typological category.[7]

While the typical object is a pronoun, noun, or noun phrase, objects can also appear as other syntactic categories, as illustrated in the following table:

A number of criteria can be employed for identifying objects, e.g:[8]

2. Position occupied: In languages with strict word order, the subject and the object tend to occupy set positions in unmarked declarative clauses. The object follows the subject.

Languages vary significantly with respect to these criteria. The first criterion identifies objects reliably most of the time in English, e.g.

The second criterion is also a reliable criterion for analytic languages such as English, since the relatively strict word order of English usually positions the object after the verb(s) in declarative sentences. The third criterion is less applicable to English, though, since English lacks morphological case, exceptions being the personal pronouns (I/me, we/us, he/him, she/her, they/them). For languages that have case and relatively freer word order, morphological case is the most readily available criterion for identifying objects. In Latin and related languages, direct objects are usually marked with the accusative case, and indirect objects with the dative case. However, object marking may also follow non-syntactic rules, such as animacy. In Spanish, for example, human objects have to be marked by the preposition a (as an example of differential object marking).

Verbs can be classified according to the number and/or type of objects that they do or do not take. The following table provides an overview of some of the various verb classes:[10]

Ergative[12] and object-deletion verbs[13] can be transitive or intransitive, as indicated in the following table:

Objects are distinguished from subjects in the syntactic trees that represent sentence structure. The subject appears (as high or) higher in the syntactic structure than the object. The following trees of a dependency grammar illustrate the hierarchical positions of subjects and objects:[14] 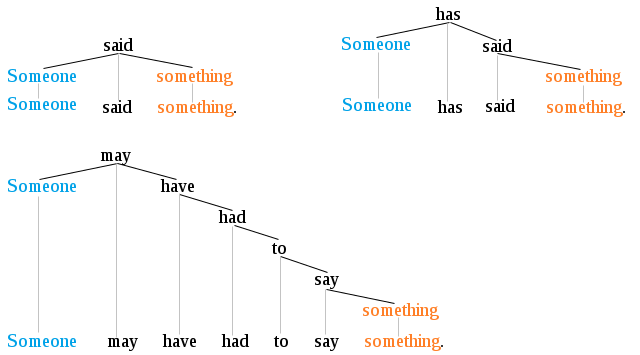