There is a sizable community of people of Indian origin living in Uganda, known as Ugandan Asians, but it is less than in previous times. In 2003, there were an estimated 15,000 people of Asian descent (majority Indians and Pakistanis) living in Uganda compared to approximately 80,000 before they were expelled by dictator Idi Amin in 1972.[1]

Many returned to Uganda in the 1980s and 1990s and have once again gone on to dominate the country's economy.[2] Despite making up less than 1 percent of the population they are estimated to contribute up to 65% of the country's tax revenues.[2] Sudhir Ruparelia, an Asian, is the richest man in Uganda and has an estimated fortune of $1 billion.[2] 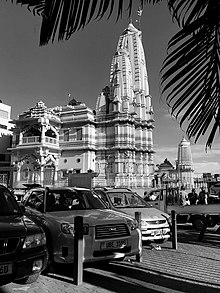 Shree Sanatan Dharma Mandal faith (SSDM)was established by early Asians who came to Uganda to work on the Uganda railway under the colonial era. The foundation stone to this temple, was laid in 1954 and completed in 1964. It was the first Shikma temple built outside India. This structure was built without any iron bars or steel right from the foundation upto it’s dorm which is over four floors high.

During the late 19th century, mostly Punjabi Sikhs were brought to Uganda on three-year contracts, with the aid of Imperial British contractor Alibhai Mulla Jeevanjee, to build the Uganda Railway from Mombasa to Kisumu by 1901 and to Kampala by 1931. Some died, others returned to India after the end of their contracts, and others chose to stay. They were joined by Gujarati traders called "passenger Indians", both Hindu and Muslim free migrants who came to serve the economic needs of the indentured laborers and to capitalize on the economic opportunities.[3][4]

Over time, Indians became prosperous and dominated much of the Ugandan economy, which prompted the rise of resentment and Indophobia.[3] These resentments came to a crisis when Idi Amin ousted Milton Obote by military coup d'état in 1971. The following year, Amin ordered the expulsion of Asians living in Uganda.[5] As a result, many Indians migrated to the United Kingdom, Canada, the United States, and elsewhere and began rebuilding their lives. After Amin's death, however, more Indians who were born in Uganda started migrating back.[6][7]

Demographically, the number of people of mixed Ugandan-Indian heritage is not known (Multiracial Ugandans in Uganda).