India and weapons of mass destruction

India is a member of three multilateral export control regimes — the Missile Technology Control Regime, Wassenaar Arrangement and Australia Group. It has signed and ratified the Biological Weapons Convention and the Chemical Weapons Convention. India is also a subscribing state to the Hague Code of Conduct. India has signed neither the Comprehensive Nuclear-Test-Ban Treaty nor the Nuclear Non-Proliferation Treaty, considering both to be flawed and discriminatory.[12] India previously possessed chemical weapons, but voluntarily destroyed its entire stockpile in 2009 — one of the seven countries to meet the OPCW extended deadline.[13]

India maintains a "no first use" nuclear policy and has developed a nuclear triad capability as a part of its "Minimum Credible Deterrence" doctrine.[14][15]

India has a biotechnology infrastructure that includes numerous pharmaceutical production facilities and bio-containment laboratories (including BSL-3 and BSL-4) for working with lethal pathogens. It also has scientists with expertise in infectious diseases. Some of India's facilities are being used to support research and development for biological weapons (BW) defence purposes. India has ratified the Biological Weapons Convention (BWC) and pledges to abide by its obligations. There is no clear evidence, circumstantial or otherwise, that directly points toward an offensive BW program. India does possess the scientific capability and infrastructure to launch an offensive BW program. In terms of delivery, India also possesses the capability to produce aerosols and has numerous potential delivery systems ranging from crop dusters to sophisticated ballistic missiles.[16]

No information exists in the public domain suggesting interest by the Indian government in delivery of biological agents by these or any other means. To reiterate the latter point, in October 2002, the then President A. P. J. Abdul Kalam asserted that "India will not make biological weapons. It is cruel to human beings".[16]

In June 1997, India declared its stock of chemical weapons (1,045 tonnes of sulphur mustard).[18][19] By the end of 2006, India had destroyed more than 75 percent of its chemical weapons/material stockpile and was granted extension for destroying the remaining stocks by April 2009 and was expected to achieve 100 percent destruction within that time frame.[18] India informed the United Nations in May 2009 that it had destroyed its stockpile of chemical weapons in compliance with the international Chemical Weapons Convention. With this India has become third country after South Korea and Albania to do so.[20][21] This was cross-checked by inspectors of the United Nations.

India has an advanced commercial chemical industry, and produces the bulk of its own chemicals for domestic consumption. It is also widely acknowledged that India has an extensive civilian chemical and pharmaceutical industry and annually exports considerable quantities of chemicals to countries such as the United Kingdom, United States and Taiwan.[22]

As long as the world is constituted as it is, every country will have to devise and use the latest devices for its protection. I have no doubt India will develop her scientific researches and I hope Indian scientists will use the atomic force for constructive purposes. But if India is threatened, she will inevitably try to defend herself by all means at her disposal.[23]

India built its first research reactor in 1956 and its first plutonium reprocessing plant by 1964.[24][25][26] India's nuclear programme can trace its origins to March 1944 and its three-stage efforts in technology were established by Homi Jehangir Bhabha when he founded the nuclear research centre, the Tata Institute of Fundamental Research.[27][28] India's loss to China in a brief Himalayan border war in October 1962, provided the New Delhi government impetus for developing nuclear weapons as a means of deterring potential Chinese aggression.[29] By 1964 India was in a position to develop nuclear weapons[30]. India first tested a nuclear device in 1974 (code-named "Smiling Buddha"), under Prime Minister Indira Gandhi, which it called a "peaceful nuclear explosion." The test used plutonium produced in the Canadian-supplied CIRUS reactor, and raised concerns that nuclear technology supplied for peaceful purposes could be diverted to weapons purposes. This also stimulated the early work of the Nuclear Suppliers Group.[31] India performed further nuclear tests in 1998 (code-named "Operation Shakti") under Prime Minister Atal Bihari Vajpayee. In 1998, as a response to the continuing tests, the United States and Japan imposed sanctions on India, which have since been lifted.[32]

R Chidambaram who headed India's Pokhran-II nuclear tests said in an interview to the Press Trust of India that India is capable of producing a neutron bomb.[33]

India has a declared nuclear no-first-use policy and is in the process of developing a nuclear doctrine based on "credible minimum deterrence." In August 1999, the Indian government released a draft of the doctrine[34] which asserts that nuclear weapons are solely for deterrence and that India will pursue a policy of "retaliation only". The document also maintains that India "will not be the first to initiate a nuclear first strike, but will respond with punitive retaliation should deterrence fail" and that decisions to authorise the use of nuclear weapons would be made by the Prime Minister or his 'designated successor(s)'.[34] According to the NRDC, despite the escalation of tensions between India and Pakistan in 2001–2002, India remained committed to its nuclear no-first-use policy.

India's Strategic Nuclear Command was formally established in 2003, with an Air Force officer, Air Marshal Asthana, as the Commander-in-Chief. The joint services SNC is the custodian of all of India's nuclear weapons, missiles and assets. It is also responsible for executing all aspects of India's nuclear policy. However, the civil leadership, in the form of the CCS (Cabinet Committee on Security) is the only body authorised to order a nuclear strike against another offending strike. The National Security Advisor Shivshankar Menon signalled a significant shift from "No first use" to "no first use against non-nuclear weapon states" in a speech on the occasion of Golden Jubilee celebrations of National Defence College in New Delhi on 21 October 2010, a doctrine Menon said reflected India's "strategic culture, with its emphasis on minimal deterrence.[35][36] In April 2013 Shyam Saran, convener of the National Security Advisory Board, affirmed that regardless of the size of a nuclear attack against India, be it a miniaturised version or a "big" missile, India will retaliate massively to inflict unacceptable damage.[37]

In 2016, the India's Defence Minister Manohar Parrikar questioned the no first use policy of India, saying why should India "bind" itself when it is a "responsible nuclear power". Later he clarified that this was his personal opinion.[38] Defence Minister Rajnath Singh in 2019 said that in future India's no first use policy might change depending upon the "circumstances".[39][40]

The Mirage 2000 of the Indian Air Force is believed to be assigned the nuclear strike role, operating from Maharajpur Air Force Station.

Nuclear-armed fighter-bombers were India's first and only nuclear-capable strike force until 2003, when the country's first land-based nuclear ballistic missiles were fielded.[41]

In addition to their ground-attack role, it is believed that the Dassault Mirage 2000s and SEPECAT Jaguars of the Indian Air Force are able to provide a secondary nuclear-strike role.[42] The SEPECAT Jaguar was designed to be able to carry and deploy nuclear weapons and the Indian Air Force has identified the jet as being capable of delivering Indian nuclear weapons.[43] The most likely delivery method would be the use of bombs that are free-falling and unguided.[44] 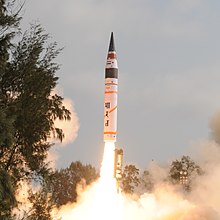 The estimated 68 nuclear warheads[41] of land-based nuclear weapons of India are under the control of and deployed by the Strategic Forces Command,[45] using a variety of both vehicles and launching silos. They currently consist of three different types of ballistic missiles, the Agni-I, the Agni-II, Agni-III and the Army's variant of the Prithvi missile family – the Prithvi-I. Additional variants of the Agni missile series have recently been inducted including the most recent, the Agni-IV[46] and the Agni-V, which is currently being deployed.[47] Agni-VI is also under development, with an estimated range of 8,000–12,000 km and features such as Multiple independently targetable reentry vehicles (MIRVs) or Maneuverable reentry vehicles (MARVs).[48][49] 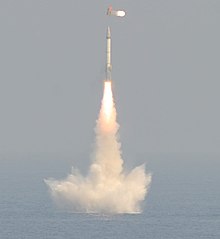 The Indian Navy has developed two sea-based delivery systems for nuclear weapons, completing Indian ambitions for a nuclear triad, which may have been deployed in 2015.[50][51]

A conceptual drawing of INS Arihant

India is not a signatory to either the NPT or the Comprehensive Nuclear-Test-Ban Treaty (CTBT), but did accede to the Partial Nuclear Test Ban Treaty in October 1963. India is a member of the International Atomic Energy Agency (IAEA), and four of its 17 nuclear reactors are subject to IAEA safeguards. India announced its lack of intention to accede to the NPT as late as 1997 by voting against the paragraph of a General Assembly Resolution[66] which urged all non-signatories of the treaty to accede to it at the earliest possible date.[67] India voted against the UN General Assembly resolution endorsing the CTBT, which was adopted on 10 September 1996. India objected to the lack of provision for universal nuclear disarmament "within a time-bound framework." India also demanded that the treaty ban laboratory simulations. In addition, India opposed the provision in Article XIV of the CTBT that requires India's ratification for the treaty to enter into force, which India argued was a violation of its sovereign right to choose whether it would sign the treaty. In early February 1997, Foreign Minister I. K. Gujral reiterated India's opposition to the treaty, saying that "India favors any step aimed at destroying nuclear weapons, but considers that the treaty in its current form is not comprehensive and bans only certain types of tests."

In August 2008, the International Atomic Energy Agency (IAEA) approved safeguards agreement with India under which the former will gradually gain access to India's civilian nuclear reactors.[68] In September 2008, the Nuclear Suppliers Group granted India a waiver allowing it to access civilian nuclear technology and fuel from other countries.[69] The implementation of this waiver makes India the only known country with nuclear weapons which is not a party to the NPT but is still allowed to carry out nuclear commerce with the rest of the world.[70][71]

Since the implementation of the NSG waiver, India has signed nuclear deals with several countries including France,[72] United States,[73] Mongolia, Namibia,[74] Kazakhstan[75] and Australia[76] while the framework for similar deals with Canada and United Kingdom are also being prepared.[77][78][71]