Joachim (/ˈdʒoʊəkɪm/; "he whom Yahweh has set up", Hebrew: יְהוֹיָקִים‎ Yəhôyāqîm, Greek Ἰωακείμ Iōākeím) was, according to Christian tradition, the husband of Saint Anne and the father of Mary, the mother of Jesus. The story of Joachim and Anne first appears in the apocryphal Gospel of James.[1] His feast day is 26 July, a date shared with Saint Anne.

According to tradition, Saint Anne was born in Bethlehem, and married Joachim of Nazareth. In the Protoevangelium of James, Joachim is described as a rich and pious man, who regularly gave to the poor. Tradition has it that the parents of the Blessed Virgin, who, apparently, first lived in Galilee, came later on to settle in Jerusalem.[2]

At the temple, Joachim's sacrifice was rejected, as the couple's childlessness was interpreted as a sign of divine displeasure. Joachim consequently withdrew to the desert, where he fasted and did penance for 40 days. Angels then appeared to both Joachim and Anne to promise them a child.[3]

Joachim later returned to Jerusalem and embraced Anne at the city gate, located in the Walls of Jerusalem. An ancient belief held that a child born of an elderly mother who had given up hope of having offspring was destined for great things. Parallels occur in the Old Testament in the case of Hannah, mother of Samuel,[4] and in the New Testament in the case of the parents of St John the Baptist.

The cycle of legends concerning Joachim and Anne was included in the Golden Legend (around 1260) by Jacobus da Varagine. This cycle remained popular in Christian art until the Council of Trent (1545–1563) restricted the depiction of apocryphal events.

No liturgical celebration of Saint Joachim was included in the Tridentine Calendar. It was added to the General Roman Calendar in 1584, for celebration on 20 March, the day after the feast day of Saint Joseph. In 1738, it was transferred to the Sunday after the Octave of the Assumption of Mary. As part of his effort to allow the liturgy of Sundays to be celebrated, Pope Pius X (term 1903-1914) transferred it to 16 August, the day after the Assumption, so Joachim may be remembered in the celebration of Mary's triumph.[5] It was then celebrated as a Double of the Second Class, a rank that was changed in 1960 to that of Second Class Feast. In the 1969 revision of the General Roman Calendar, it was joined to that of Anne, for celebration on 26 July.[6] 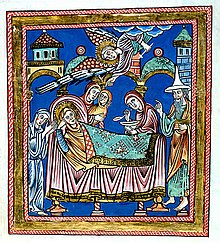 The Eastern Orthodox Churches and Greek Catholics commemorate Joachim on 9 September, the Synaxis of Joachim and Anne, the day after the Nativity of the Theotokos.

In the Quran, the father of Mary, mother of Jesus is known as Imran (ʿImrān). In the Quran, a whole chapter, Al Imran, is named after his family. The name is mentioned in several locations and it is said that his family was one of those preferred over all of God's creatures: "Lo! God preferred Adam and Noah and the Family of Abraham and the Family of 'Imran above (all His) creatures."[Quran 3:33 (Translated by Pickthall)]

It has been narrated in Shi'i hadith from Abu Basir that Ja'far al-Sadiq, the Twelver Imam confirmed that Imran was a prophet and apostle to his people, further stating "Hannah, the wife of Imran, and Ishba, the wife of Zechariah, were sisters. He goes on to say that Mary was born from Hannah and John the Baptist was born from Ishba. Mary gave birth to Jesus and he was the son of the daughter of John's aunt. John was the son of the aunt of Mary, and the aunt of one's mother is like one's aunt."[7]

In medieval art he often wears a conical Jewish hat. He is often treated as a saint, with a halo, but in the Western church there was some awareness that he had quite likely died too soon to strictly be counted as a Christian.

Joachim and Anne Meeting at the Golden Gate was a popular subject in artistic renditions of the life of the Virgin.

Symbols associated with Saint Joachim include a book or scroll representing linen makers, a shepherd's staff for the Christian Word, and a basket of doves representing peace. He is almost always clothed in green, the color of hope.[13]

The name of the San Joaquin River dates to 1805–1808, when Spanish explorer Gabriel Moraga was surveying east from Mission San José in order to find possible sites for a mission. The name was in common use by 1810.[14]