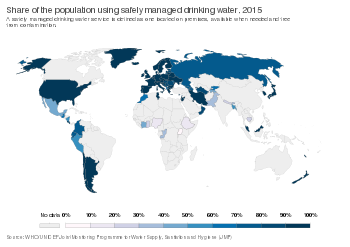 The term was coined by the Joint Monitoring Program (JMP) for Water Supply and Sanitation of UNICEF and WHO in 2002 to help monitor the progress towards Goal Number 7 of the Millennium Development Goals (MDGs). The opposite of "improved water source" has been termed "unimproved water source" in the JMP definitions.

The same terms are used to monitor progress towards Sustainable Development Goal 6 (Target 6.1, Indicator 6.1.1) from 2015 onwards.[2] Here, they are a component of the definition for "safely managed drinking water service".

In 2017, JMP defined a new term: "basic water service". This is defined as the drinking water coming from an improved source, and provided the collection time is not more than 30 minutes for a round trip. A lower level of service is now called "limited water service" which is the same as basic service but the collection time is longer than 30 minutes.[2] :8

Water sources that are not considered as "improved" are: