Improved sanitation is a term used to categorize types or levels of sanitation for monitoring purposes. The term was coined by the Joint Monitoring Program (JMP) for Water Supply and Sanitation of UNICEF and WHO in 2002 to help monitor the progress towards Goal Number 7 of the Millennium Development Goals (MDGs). The opposite of "improved water source" has been termed "unimproved water source" in the JMP definitions.

The same terms are used to monitor progress towards Sustainable Development Goal 6 (Target 6.2, Indicator 6.2.1) from 2015 onwards.[2] Here, they are a component of the definition for "safely managed sanitation service".

The Joint Monitoring Program (JMP) for Water Supply and Sanitation has been publishing updates on the global sanitation situation on an annual basis. For example, in 2015 it was reported that 68% percent of the world's population had access to improved sanitation.[3]

In 2015 this goal was superceeded by Sustainable Development Goal 6, in which Target 6.2 states: "By 2030, achieve access to adequate and equitable sanitation and hygiene for all and end open defecation, paying special attention to the needs of women and girls and those in vulnerable situations." Indicator 6.2.1 is the Proportion of population using (a) safely managed sanitation services and (b) a hand-washing facility with soap and water.[4]

The definition of improved sanitation facilities is: Those facilities designed to hygienically separate excreta from human contact.[2]:8

To allow for international comparability of estimates for monitoring the Millennium Development Goals (MDGs), the Joint Monitoring Program (JMP) for Water Supply and Sanitation defines "improved" sanitation as the following kind of toilets:[5] 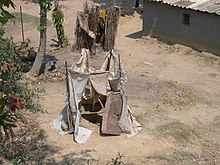 Sanitation facilities that are not considered as "improved" (also called "unimproved") are:

Whilst "shared" toilets are not counted as improved sanitation, data about usage of shared toilets is nevertheless report in the annual progress reports of the JMP.[6]