According to the United Nations, there has been an increase of cocaine trafficking through Venezuela since 2002.[1] In 2005 Venezuela severed ties with the United States Drug Enforcement Administration (DEA), accusing its representatives of spying.[2] Following the departure of the DEA from Venezuela and the expansion of DEA's partnership with Colombia in 2005, Venezuela became more attractive to drug traffickers.[3] Between 2008 and 2012, Venezuela's cocaine seizure ranking among other countries declined, going from being ranked fourth in the world for cocaine seizures in 2008[4] to sixth in the world in 2012.[5] 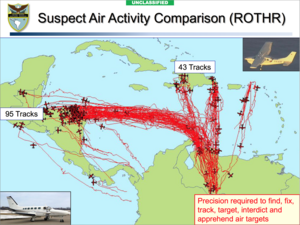 According to a 2009 US report, 90% of US cocaine is sourced from Colombia, with Venezuela and the Caribbean accounting for around 10% of US-destined cocaine trans-shipments in 2010.[6] Another significant route is directed to export cocaine, marijuana and other illegal drugs via direct sea shipments from Venezuela to Europe, with half of all direct shipments to Europe between 2006 and 2008 originating in Venezuela.[7][8]

In Apure, Colombian guerrilla group FARC had set up locations in the state, creating multiple airfields in the region.[10] In September 2013, 31 suitcases containing 1.3 tons of cocaine on an Air France flight astonished Paris authorities as it was the largest seizure of cocaine recorded in mainland France.[3][11]

At a presentation at the XXXII International Conference on Drugs in 2015, commander of the United States Southern Command General John Kelly stated that though relations with other Latin American nations countering drug trafficking has been good, Venezuela was not as cooperative and that "there's a lot of cocaine leaving Venezuela to the world market". General Kelly also stated that almost all shipments of cocaine using aircraft comes out of Venezuela and that since 2013 to early-2014, the route of drug trafficking aircraft has changed from heading to Central America to primarily traveling through Caribbean islands.[12]

Since 2012, the United States government has stated that "generally permissive security forces and a corrupt political environment have made Venezuela one of the preferred routes of cocaine trafficking from South America", noting that drug trafficking organizations ranging from Mexican cartels, such as Los Zetas, Ángeles Caído and the Sinaloa Cartel, to armed far-right Colombian organizations and the FARC and ELN, have operated from Venezuela. According to the United States, "elements of the Venezuelan security forces have assisted these drug trafficking organizations".[9]

In the early 1970s parts of the Cuntrera-Caruana Mafia clan moved to Venezuela,[13] which became an important hideout as the clan bought hotels and founded various businesses in Caracas and Valencia, as well as an extended ranch in Barinas, near the Colombian border. "Venezuela has its own Cosa Nostra family as if it is Sicilian territory," according to the Italian police. "The structure and hierarchy of the Mafia has been entirely reproduced in Venezuela." The Cuntrera-Caruana clan had direct links with the ruling Commission of the Sicilian Mafia, and are acknowledged by the American Cosa Nostra.[13]

Pasquale, Paolo and Gaspare Cuntrera were expelled from Venezuela in 1992, "almost secretly smuggled out of the country, as if it concerned one of their own drug transports. It was imperative they could not contact people on the outside who could have used their political connections to stop the expulsion. " Their expulsion was ordered by a commission of the Venezuelan Senate headed by Senator Cristobal Fernandez Dalo and his money laundering investigator, Thor Halvorssen Hellum. They were arrested in September 1992 at Fiumicino airport (Rome),[14][15] and in 1996 were sentenced to 13–20 years.[13]

See also: Corruption in Venezuela and Cartel of the Suns

According to Jackson Diehl, Deputy Editorial Page Editor of The Washington Post, the Bolivarian Government of Venezuela shelters "one of the world’s biggest drug cartels". There have also been allegations that former president Hugo Chávez and Diosdado Cabello being involved with drug trafficking.[18]

In May 2015, The Wall Street Journal reported from United States officials that drug trafficking in Venezuela increased significantly with Colombian drug traffickers moving from Colombia to Venezuela due to pressure from law enforcement.[19] One United States Department of Justice official described the higher ranks of the Venezuelan government and military as "a criminal organization", with high ranking Venezuelan officials, such as National Assembly President Diosdado Cabello, being accused of drug trafficking and chief of Cartel of the Suns.[19] Those involved with investigations stated that Venezuelan government defectors and former traffickers had given information to investigators and that details of those involved in government drug trafficking were increasing.[19] 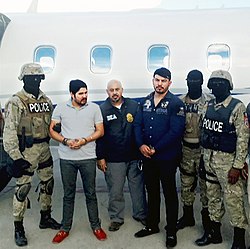 In October and November 2015, the Drug Enforcement Administration (DEA) began monitoring two nephews of President Nicolás Maduro's wife Cilia Flores—Efraín Antonio Campo Flores and Francisco Flores de Freites—after the two had contacted a person that was an DEA informant. They wanted advice as how to traffic cocaine. They brought to the meeting a kilogram of the drug so that the informant could understand its quality.[20] On 10 November 2015, Campo Flores and Flores de Freites, were arrested in Port-au-Prince, Haiti by local police while attempting to make a deal to transport 800 kilograms[21] of cocaine destined for New York City and were turned over to the DEA where they were flown directly to the United States.[20][22][23] The men flew from a hangar reserved for the President of Venezuela in Simón Bolívar International Airport into Haiti while being assisted by Venezuelan military personnel, which included two presidential honor guards, with the nephews carrying Venezuelan diplomatic passports which did not have diplomatic immunity according to former head of DEA international operations Michael Vigil.[24][25][22] A later raid of Efraín Antonio Campo Flores' "Casa de Campo" mansion and yacht in the Dominican Republic revealed an additional 280 lbs of cocaine and 22 lbs of heroin, with 176 lbs of the drugs found in the home while the remainder was discovered in his yacht.[26]

Campo stated on the DEA plane that he was the step son of President Maduro and that he grew up in the Maduro household while being raised by Maduro's wife, Cilia Flores.[20][23] When the two learned that they did not have diplomatic immunity, they began to give names of those involved, allegedly naming former National Assembly President Diosdado Cabello, and Governor of Aragua State Tarek El Aissami.[27] It is expected that without cooperating with investigators, Maduro's nephews could face between 20 to 30 years in prison.[27] Due to the extradition process, New York courts could not apprehend those who assisted the nephews on their way to Haiti.[25] The incident happened at a time when multiple high-ranking members of the Venezuelan government were being investigated for their involvement of drug trafficking,[20] including Walter Jacobo Gavidia, Flores' son who is a Caracas judge, as well as Diosdado Cabello and Tarek El Aissami.[24][27]

On November 18, 2016, the two nephews were found guilty, with the cash allegedly destined to .."help their family stay in power".[28]

In 2008, the U.S. Department of Treasury accused two senior Venezuelan government officials and one former official of providing material assistance for drug-trafficking operations carried out by the FARC guerrilla group in Colombia.[29] In the same year, the Secretary General of the Organization of American States, Jose Miguel Insulza, testified before the U.S. Congress that "there are no evidences [sic]" that Venezuela is supporting "terrorist groups", including the FARC.[30] In a 2009 United States Congress report, it was stated that corruption in the Venezuelan armed forces was facilitating Colombian FARC guerillas' drug trafficking.[31]

In March 2012, Venezuela's National Assembly removed Supreme Court Justice Eladio Aponte Aponte from his post after an investigation revealed alleged ties to drug-trafficking. On the day he was to face questioning, Aponte Aponte fled the country, and has sought refuge in the U.S., where he began to cooperate with the Drug Enforcement Administration (DEA) and the Department of Justice. Aponte says that, while serving as a judge. he was forced to acquit an army commander who had connections with a 2 metric ton shipment of cocaine. Aponte also claimed that Henry Rangel, former defense minister of Venezuela and General Clíver Alcalá Cordones were both involved with the drug trade in Venezuela.[32] Venezuelan officials have also been allegedly working with Mexican drug cartels.[32]

In September 2013, an incident involving men from the Venezuelan National Guard placing 31 suitcases containing 1.3 tons of cocaine on a Paris flight astonished French authorities.[32] On 15 February 2014, a commander for the Guard was stopped while driving to Valencia with his family and was arrested for having 554 kilos of cocaine in his possession.[33] According to Colombian weekly Revista Semana, the director of the Dirección General de Inteligencia Militar (DGIM), Venezuelan agency in charge of Military Intelligence, was involved in supporting FARC drug trafficking.[34]

The Venezuelan government has allegedly had a long relationship with the Islamic militant group Hezbollah.[35] In a 2011 article by The New York Times, Colonel Adel Mashmoushi, Lebanon’s drug enforcement chief, stated that flights between Venezuela and Syria that were operated by Iran could have been used by Hezbollah to transport drugs into the Middle East.[36] According to long-time serving New York district attorney Robert Morgenthau, high-ranking Venezuelan officials turned Venezuela to "a global cocaine hub" and his office had found that cocaine in New York was linked to Venezuela, Iran and Hezbollah.[37] Morgenthau also explained how Hugo Chávez's government allegedly assisted Iran with drug trafficking so Iran could circumvent sanctions and fund their development of nuclear weapons and other armaments.[37]

The CIA, in spite of objections from the Drug Enforcement Administration, in 1990 allowed at least one ton of nearly pure cocaine to be shipped into Miami International Airport. The CIA claimed to have done this as a way of gathering information about Colombian drug cartels. But the cocaine ended up being sold on the street.[38][39]

In November 2014, authorities from Brazil, Colombia, Honduras, and the United States dismantled an international drug trade and money laundering operation which was based in Brazil where aircraft had their ID codes modified and were then flown from areas in Venezuela controlled by FARC to Honduras where the aircraft were abandoned.[40]

According to The New York Times, claims presented by the Venezuelan government "appear to be vastly overstated".[10] In 2009, a report from the United States Congress said that from 2004 to 2007, the quantity of cocaine exported from Colombia via Venezuela had quadrupled, reaching 17% of world trade in cocaine in 2007.[31] The smuggling of cocaine has increased in Venezuela in the 2010s, going from about 25% of South American cocaine coming from the country in 2010[10] to about 33% in 2015.[19]