Igor Sergeyevich Gouzenko (Russian: Игорь Сергеевич Гузенко [ˈiɡərʲ sʲɪrˈɡʲejɪvʲɪtɕ ɡʊˈzʲɛnkə]; January 26, 1919 – June 25, 1982)[1] was a cipher clerk for the Soviet embassy to Canada in Ottawa, Ontario. He defected on 5 September 1945, three days after the end of World War II, with 109 documents on the USSR's espionage activities in the West. This forced Canada's Prime Minister Mackenzie King to call a Royal Commission to investigate espionage in Canada.

Gouzenko exposed Soviet intelligence's efforts to steal nuclear secrets as well as the technique of planting sleeper agents. The "Gouzenko Affair" is often credited as a triggering event of the Cold War,[2] with historian Jack Granatstein stating it was "the beginning of the Cold War for public opinion" and journalist Robert Fulford writing he was "absolutely certain the Cold War began in Ottawa".[3] Granville Hicks described Gouzenko's actions as having "awakened the people of North America to the magnitude and the danger of Soviet espionage".[4]

Gouzenko was born on January 13, 1919, in the village of Rogachev near Dmitrov, Moscow Governorate (now Moscow Oblast), 100 kilometers north-west of Moscow. He was the youngest of three children.[5][6]

He studied at the Moscow Architectural Institute. While at the institute he met his future wife Svetlana (Anna) Gouseva; the couple married soon after meeting.[6] At the start of World War II, he joined the military where he trained for a year as a cipher clerk. His position gave him knowledge of Soviet espionage activities in the West. Gouzenko worked under the leadership of Colonel Nikolai Zabotin.[6] 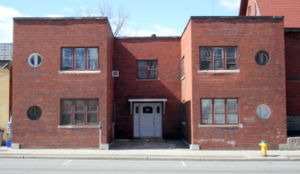 In September 1945, upon learning that he and his family were to be sent home to the Soviet Union and dissatisfied with the quality of life and the politics of his homeland, he decided to defect. Gouzenko walked out of the embassy door carrying with him a briefcase with Soviet code books and deciphering materials. He initially went to the Royal Canadian Mounted Police, but the RCMP officers on duty refused to believe his story. He then went to the Ottawa Journal newspaper, but the paper's night editor was not interested, and suggested he go to the Department of Justice but nobody was on duty when he arrived there.[7] Terrified that the Soviets had discovered his duplicity, he went back to his apartment and hid his family in the apartment across the hall for the night. Gouzenko, hidden by a neighbour, watched through the keyhole as a group of Soviet agents broke into his apartment. They began searching through his belongings, and left only when confronted by Ottawa police.

The next day Gouzenko was able to find contacts in the RCMP who were willing to examine the documents he had removed from the Soviet embassy. Gouzenko was transported by the RCMP to the secret World War II "Camp X", comfortably distant from Ottawa. While there, Gouzenko was interviewed by investigators from Britain's internal security service, MI5 (rather than MI6, as Canada was within the British Commonwealth) and by investigators from the U.S. Federal Bureau of Investigation (as the CIA had not yet been founded).

It has been alleged[8] that, though the RCMP expressed interest in Gouzenko, Prime Minister of Canada William Lyon Mackenzie King initially wanted nothing to do with him. Even with Gouzenko in hiding and under RCMP protection, King reportedly[citation needed] pushed for a diplomatic solution to avoid upsetting the Soviet Union, still a wartime ally and ostensible friend. Documents reveal that King, then 70 and weary from six years of war leadership, was aghast when Norman Robertson, his undersecretary for external affairs, and his assistant, H. H. Wrong, informed him on the morning of September 6, 1945, that a "terrible thing" had happened. Gouzenko and his wife Svetlana, they told him, had appeared at the office of Justice Minister Louis St. Laurent with documents unmasking Soviet perfidy on Canadian soil. "It was like a bomb on top of everything else", King wrote.[9] King's diaries assembled after his death were missing a single volume for November 10 to December 31, 1945, according to Library and Archives Canada.[9][10]

Igor Gouzenko's pistol, which he was carrying when hiding in his neighbor's apartment (exhibit of the International Spy Museum in Washington, DC).

Robertson told the Prime Minister that Gouzenko was threatening suicide, but King was adamant that his government not get involved, even if Gouzenko was apprehended by Soviet authorities. Robertson ignored King's wishes and authorized the granting of asylum to Gouzenko and his family, on the basis that their lives were in danger.[citation needed]

Ramifications of the defection

In February 1946, news spread that a network of Canadian spies under control of the Soviet Union had been passing classified information to the Soviet government.[11] Much of the information taken then is public knowledge now,[clarification needed] and the Canadian government was less concerned with the information stolen, but more of the potential of real secrets coming into the hands of future enemies.

Canada played an important part in the early research with nuclear bomb technology, Canada along with the UK being part of the wartime Manhattan Project, and that kind of vital information could be dangerous to Canadian interests in the hands of other nations.[11]

Gouzenko's defection "ushered in the modern era of Canadian security intelligence".[attribution needed][12] The evidence provided by Gouzenko led to the arrest of 39 suspects, including Agatha Chapman, whose apartment at 282 Somerset Street West was a favourite evening rendezvous;[13] a total of 18 were eventually convicted of a variety of offences.[11] Among those convicted were Fred Rose, who was the only Communist Member of Parliament in the Canadian House of Commons; Sam Carr, the Communist Party's national organizer; and scientist Raymond Boyer.[11][14]

Chapman was later acquitted; the judge in her case announced that "No case has been made out and, as far as this trial is concerned, the accused is dismissed."[13]

A Royal Commission of Inquiry to investigate espionage, headed by Justices Robert Taschereau and Roy Kellock, was conducted into the Gouzenko Affair and his evidence of a Soviet spy ring in Canada. It also alerted other countries around the world, such as the United States and the United Kingdom, that Soviet agents had almost certainly infiltrated their nations as well.

Gouzenko provided many vital leads which assisted greatly with ongoing espionage investigations in Britain and North America. The documents he handed over exposed numerous Canadians who were spying for the Soviet Union. A clerk at the External Affairs, a Canadian Army captain, and a radar engineer working at the National Research Council were arrested for espionage. A spy ring of up to 20 people passing information to the Soviets led by Fred Rose was also exposed.[15] In the United States the FBI tracked down a Soviet spy, Ignacy Witczak, at the University of Southern California (USC) in Los Angeles.[16]

Gouzenko and his family were given another identity by the Canadian government out of fear of Soviet reprisals. Gouzenko, as assigned by the Canadian government, lived the rest of his life under the assumed name of George Brown.[17] Little is known about his life afterwards, but it is understood that he and his wife settled down to a middle-class existence in the Toronto suburb of Clarkson. They raised eight children together. He was, however, involved in a defamation case against Maclean's for a libellous article written about him. The case was eventually heard by the Supreme Court of Canada.[18]

Gouzenko remained in the public eye, writing two books, This Was My Choice, a non-fiction account of his defection, and the novel The Fall of a Titan, which won a Governor General's Award in 1954. Gouzenko also appeared on television to promote his books and air grievances with the RCMP, always with a hood over his head.

Gouzenko died of a heart attack in 1982 at Mississauga, Ontario, Canada. Svetlana died in September 2001 and was buried next to him. His grave was unmarked until 2002, when family members erected a headstone.

In 2002 federal Heritage Minister Sheila Copps designated "The Gouzenko Affair (1945-46)" an event of national historic significance. In June 2003, the city of Ottawa[19] and in April 2004, the Canadian federal government[20] put up memorial plaques in Dundonald Park commemorating the Soviet defector. It was from this park that RCMP agents monitored Gouzenko's apartment across Somerset Street the night men from the Soviet embassy came looking for Gouzenko. The story of the process of lobbying the two levels of government to unveil the historic plaques is told in the book "Remembering Gouzenko: The Struggle to Honour a Cold War Hero" by Andrew Kavchak (2019).

The story of the Gouzenko Affair was made into the film The Iron Curtain in 1948, directed by William Wellman, with screenplay by Milton Krims, and starring Dana Andrews and Gene Tierney as Igor and Anna Gouzenko, produced by Twentieth Century Fox. Another film version of the Gouzenko Affair was made as Operation Manhunt in 1954, directed by Jack Alexander, with screenplay by Paul Monash, and starring Harry Townes and Irja Jensen, released by United Artists.