Ignacy Mościcki (Polish pronunciation: [iɡˈnatsɨ mɔɕˈtɕitskʲi]; 1 December 1867 – 2 October 1946) was a Polish chemist, politician, and President of Poland from 1926 to 1939. He was the longest serving President in Poland's history.[1] He was serving as the president of Poland when Germany invaded the country on 1 September 1939, starting World War II.

Mościcki was born on 1 December 1867 in Mierzanowo, a small village near Ciechanów, Congress Poland. After completing school in Warsaw, he studied chemistry at the Riga Polytechnicum. There he joined the Polish underground leftist organization, Proletariat.[2]

Upon graduating, he returned to Warsaw, but was threatened by the Tsarist secret police with life imprisonment in Siberia and was forced to emigrate in 1892 to London. In 1896 he was offered an assistantship at the University of Fribourg in Switzerland. There he patented a method for cheap industrial production of nitric acid.

In 1912 Mościcki moved to Lemberg (Polish: Lwów; modern Lviv, Ukraine), in the Kingdom of Galicia and Lodomeria within the Austro-Hungarian Empire, where he accepted a chair in physical chemistry and technical electrochemistry at the Lemberg Polytechnic.[3] In 1925 he was elected rector of the Lwów Polytechnic (as it was now called), but soon moved to Warsaw to continue his research at the Warsaw Polytechnic. In 1926, he became an Honorary Member of the Polish Chemical Society.[4] 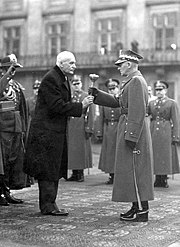 After Józef Piłsudski's May 1926 coup d'état, on 1 June 1926, Mościcki, once an associate of Piłsudski in the Polish Socialist Party, was elected president of Poland by the National Assembly on the Piłsudski's recommendation after Piłsudski had refused the office for himself.[5]

With a view to eliminating Sławek from the game, Mościcki concluded a power-sharing agreement with Rydz-Śmigły, which saw Sławek marginalized as a serious political player by the end of the year. As a result of the agreement, Rydz-Śmigły would become the de facto leader of Poland until the outbreak of the war, and Mościcki remained influential by continuing in office as president.

Mościcki was the leading moderate figure in the regime, which was referred to as the "colonels' government" because of the major presence of military officers in the Polish government. Mościcki opposed many of the nationalist excesses of the more right-wing Rydz-Śmigły, but their pact remained more or less intact.

Mościcki remained president until September 1939, when he was interned in Romania[6] following the German invasion of Poland and was forced by France to resign his office. He transferred the office to General Bolesław Wieniawa-Długoszowski, who held it for only one day before General Władysław Sikorski and the French government ousted him in favour of Władysław Raczkiewicz. 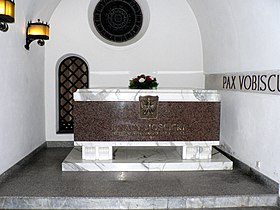 Mościcki's grave in the basement of the St. John's Archcathedral, Warsaw

Mościcki was planning to leave for Switzerland after leaving office as President. From 1908 to 1920, he was a citizen of Switzerland; he was also an honorary citizen of the Fribourg commune. The Romanian authorities gave their provisional consent to his departure, but Germany opposed it. Mościcki was offered to US President Franklin Delano Roosevelt, who was determined to have Mościcki go to Switzerland. The intervention of the US government forced the Romanian authorities to agree. General Sikorski also ordered the Polish embassy in Bucharest to provide all assistance to Mościcki. The president stayed in Romania until December 1939.[7]

Mościcki came to Switzerland through Milan, where he met with Bolesław Wieniawa-Długoszowski. Initially, he lived in Friborg, where he was allowed to continue his scientific work. During this period, among others, he wrote down his memories, which were published by the New York magazine Independence. Mościcki donated money to soldiers of the Polish Army in France, Warsaw residents in prisoner-of-war camps, concentration camps and labor camps. For five months, he taught at the University of Fribourg. Later, he was forced to take up paid work. In 1940, he moved to Geneva, where he worked in the Hydro-Nitro Chemical Laboratory.

Mościcki's health deteriorated rapidly after 1943. He died on 2 October 1946, in Versoix, near Geneva. In 1984, his descendants requested that the remains of Mościcki and his wife be moved from Switzerland to Poland. The relevant Polish authorities agreed that a funeral was to be held in Warsaw and be completely private, without any state ceremonies. However, the authorities of the Canton of Geneva in Switzerland withdrew their agreement for political reasons after protests related to Solidarity from emigrants. In 1993, Mościcki's remains were transported, on behalf of incumbent President Lech Wałęsa, to Poland and deposited in the crypt of St. John's Archcathedral, Warsaw. Mościcki's symbolic grave is located in the Avenue of Merit at the Powązki Cemetery in Warsaw, where his second wife is buried next to him.[8]