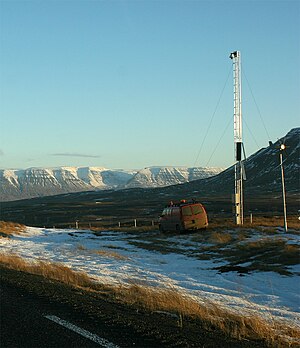 IMO quake map and diagram re. 2010 eruptions of Eyjafjallajökull

Icelandic Meteorological Office (IMO; Icelandic: Veðurstofa Íslands) is Iceland's national weather service and as such a government agency under the Ministry of Environment and Natural Resources[1] . It is also active in volcano monitoring[2], esp. volcano seismology[3], and, together with other institutions, responsible for civil protection in Iceland[4]

"The research focus of IMO is on weather and climate, atmospheric processes, glacier and avalanche studies, hydrological systems, earthquake and volcanic processes and geohazards. IMO also focuses on research in multi-parameter geophysical monitoring to develop more accurate forecasts of hazardous events. IMO has participated in several European and Nordic funded research projects, having the role of lead partner in many of them."[4]An example is the FUTUREVOLC-Project.[5]

History of the institution

IMO was founded on 1 January 1920 as a solely meteorological institute. Til in 1925, it was part of another institution (Löggildingarstofa). Since then, it is an independent institution under the Ministry of Environment and Natural Resources.

From 2009 on, the Institution for Hydrology (Vatnamælingar) was integrated into IMO.

From 2016, the Icelandic Veðurstofa manages a dual Cray XC30 system for the Danish Meteorological Institute as weather prediction, due to cheaper electricity and cooling.[7] One is used for development, the other for daily operations.[8]