Icelandic Canadians are Canadian citizens of Icelandic ancestry or Iceland-born people who reside in Canada.

Canada has the largest ethnic Icelandic population outside Iceland, with about 101,795 people of Icelandic descent as of the Canada 2016 Census.[1] Many Icelandic Canadians are descendants of people who fled an eruption of the Icelandic volcano Askja in 1875.[2]

The history between Icelanders and North America dates back approximately one thousand years. The first Europeans to reach North America were Icelandic Norsemen, who made at least one major effort at settlement in what is today Newfoundland (L'Anse aux Meadows) around 1009 AD. Snorri Þorfinnsson, the son of Þorfinnr Karlsefni and his wife Guðríður, is the first European known to have been born in the New World.[3] In 1875, over 200 Icelanders immigrated to Manitoba establishing the New Iceland colony along the west shore of Lake Winnipeg in Manitoba, this is the first part of a large wave of immigrants who settled on the Canadian prairies.[4]

According to historian Gunnar Karlsson, "migration from Iceland is unique in that most went to Canada, whereas from most or all other European countries the majority went to the United States. This was partly due to the late beginning of emigration from Iceland after the Canadian authorities had begun to promote emigration in cooperation with the Allan Line, which already had an agent in Iceland in 1873. Contrary to most European countries, this promotion campaign was successful in Iceland, because emigration was only just about to start from there and Icelandic emigrants had no relatives in the United States to help them take the first steps".[5]

Notably, Icelandic Canadians do not typically follow traditional Icelandic naming customs, by which people do not have surnames but are instead distinguished by the use of a parent's given name as a patronymic; instead, Icelandic immigrants to Canada have largely adapted to North American customs by adopting a true surname.[7] Icelandic surnames in Canada most commonly represent the patronymic of the person's first ancestor to settle in Canada,[7] although they may also sometimes be chosen to represent the family's ancestral village in Iceland rather than the name of an individual ancestor.[8]

The provinces with the most reported Icelandic-Canadians in 2016 are: 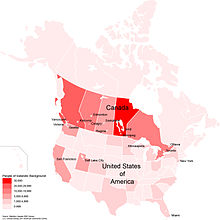 Gimli, Manitoba, pop. 5,797, is home to the largest concentration of Icelanders outside of Iceland.

Gimli, Manitoba, has a high concentration of Icelanders, with 26% of the city population, and 20% of the metro population claiming Icelandic ancestry.[9][10]

Settlements in Canada which are notably Icelandic by foundation or ethnicity:

Vilhjalmur Stefansson to another Icelandic Canadian