Ibaraki Prefecture was previously known as Hitachi Province. In 1871, the name of the province became Ibaraki.

In 1928, Nisshō Inoue, the founder of the far-right militant organization Ketsumeidan (血盟団, League of Blood), relocated to Ōarai, Ibaraki, where he established Risshō Gokokudō (立正護国堂, Righteous National Defense Temple), which served as a youth training center advocating a militarist revolution in Japan. 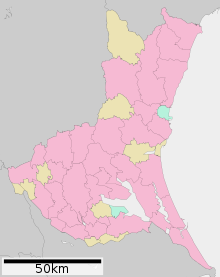 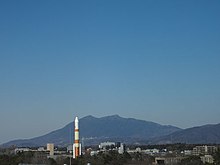 As of 1 April 2012[update], 15% of the total land area of the prefecture was designated as Natural Parks, namely Suigo-Tsukuba Quasi-National Park and nine Prefectural Natural Parks.[3]

See also: List of cities in Ibaraki Prefecture by population

Ibaraki's industries include energy production, particularly nuclear energy, as well as chemical and precision machining industries. Hitachi is a world wide company as well as a city name where the company was founded.

Ibaraki is an agricultural prefecture, producing food crops that are used throughout the country. As of March 2011, the prefecture produced 25% of Japan's bell peppers and Chinese cabbage.[4]

Ibaraki's population is decreasing more rapidly than any other prefecture.[6] 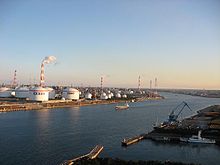 Ibaraki is known for nattō, or fermented soybeans, in Mito, watermelons in Kyōwa (recently merged into Chikusei), and chestnuts in the Nishiibaraki region.

Ibaraki is famous for the martial art of Aikido founded by Ueshiba Morihei, also known as Osensei. Ueshiba spent the latter part of his life in the town of Iwama, now part of Kasama, and the Aiki Shrine and dojo he created still remain.[7]

There are castle ruins in many cities, including Mito, Kasama, and Yūki.

Kasama is famous for Shinto, art culture and pottery.[citation needed]

The capital Mito is home to Kairakuen, one of Japan's three most celebrated gardens, and famous for its over 3,000 Japanese plum trees of over 100 varieties.

The sports teams listed below are based in Ibaraki.

The prefecture is often alternatively pronounced "Ibaragi" by those who speak the regional dialect known as Ibaraki-ben. However, the standard pronunciation is "Ibaraki". According to the author of "Not Ibaragi, Ibaraki",[8] this is most likely due to a mishearing of the softening of the "k" sound in Ibaraki dialect.