TASS is registered as a Federal State Unitary Enterprise, owned by the Government of Russia.[2] Headquartered in Moscow, TASS has 70 offices in Russia and in the Commonwealth of Independent States (CIS), as well as 68 bureaus around the world.

In Soviet times, it was named the Telegraph Agency of the Soviet Union (Телегра́фное аге́нтство Сове́тского Сою́за, Telegrafnoye agentstvo Sovetskogo Soyuza) and was the central agency for news collection and distribution for all Soviet newspapers, radio and television stations. After the dissolution of the Soviet Union, the agency was renamed Information Telegraph Agency of Russia (ITAR-TASS) (Информацио́нное телегра́фное аге́нтство Росси́и (ИТА́Р-ТАСС), Informatsionnoye telegrafnoye agentstvo Rossii (ITAR-TASS)) in 1992, but regained the simpler TASS name in 2014.[3] 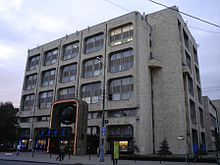 The origin of TASS dates back to December 1902 when it began operations as the Commercial Telegraph Agency (TTA, Torgovo-Telegrafnoe Agentstvo) under the Ministry of Finance, with Torgovo-Promyshlennaya Gazeta's staff being the main supplier of journalists. As the demand for non-business began during the first battles of the Russo-Japanese War in February 1904, the agency had to change its name to the St. Petersburg Telegraph Agency (SPTA). As there was no change of headquarters and almost no change in its staff and function, it was a mere rebranding.

In August 1914, one day after St. Petersburg was renamed Petrograd, SPTA was renamed the Petrograd Telegraph Agency (PTA). It was seized by Bolsheviks in November 1917 and by December was renamed as the Central Information Agency of the Soviet Russian Council of People's Commissars. On 7 September 1918, the presidium renamed PTA and the Press bureau into the Russian Telegraph Agency (ROSTA), which became "the central information agency of the whole Russian Socialist Federative Soviet Republic".[citation needed]

TASS news and photos were received by 4,000 Soviet newspapers, TV and radio stations and over a thousand foreign media outlets. The news agency ran one of the biggest networks of correspondents in the world – 682 offices in the country and 94 bureaus abroad, with reporters in 110 countries. At its peak it employed nearly 5,000 people including close to 2,000 journalists and photo correspondents.[citation needed] In addition to producing reports for general consumption, TASS produced packages of content for non-public use. Western news reports and potentially embarrassing domestic news would be compiled daily into a collection known as "White Tass," and particularly important[clarification needed] news would be compiled into a smaller collection known as "Red Tass." These collections were made available only to journalistic and political leaders, and to top journalists and political leaders, respectively.[4]

TASS was organized with five Main Editorial Boards for Union Information, Foreign Information, Socialist Countries, Information for Foreign Countries, Photo information, supplemented by a Main Directorate of Communications.[citation needed] In 1961 Ria Novosti was created to supplement TASS, mainly in foreign reporting and human-interest stories. After 1971, TASS was elevated to the status of State Committee at the Government of the Soviet Union.

The agency was frequently used as a front organization by the Soviet intelligence agencies, such as the NKVD (later KGB) and Main Intelligence Directorate, with TASS employees serving as informants. In 1959, Alexander Alexeyev was dispatched to Cuba on a fact-finding mission, ostensibly working for TASS.[5]

In January 1992, following the dissolution of the Soviet Union, a Presidential Decree signed by Boris Yeltsin re-defined status of TASS and renamed it the Information Telegraph Agency of Russia. In May 1994 The Russian Government adopted a resolution "On approval of the Charter of the Information Telegraph Agency of Russia", under which it operates as a central government news agency. The TASS acronym was, by this point, well-recognized around the world and so was retained after being redefined as the Telegraph agency of communication and messages (Russian: Телеграфное агентство связи и сообщения, tr. Telegrafnoye agentstvo svazi i soobshcheniya). The agency as a whole was referred to as "ITAR-TASS".

In September 2014 the agency regained its former name as Russian News Agency TASS.[3] 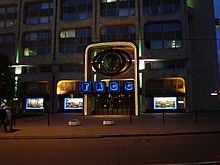 TASS is registered as a Federal State Unitary Enterprise, owned by the Government of Russia.[2] Headquartered in Moscow, TASS has 70 offices in Russia and in the Commonwealth of Independent States (CIS), as well as 68 bureaus around the world.

TASS multi-media press center is a communication floor in the heart of Moscow. Every year it hosts some 300 events featuring high-ranking Russian officials, foreign heads of state, leaders of main political parties, representatives of the world of arts and culture, scientists and sporting personalities as well as managers of Russian and foreign business enterprises. TASS press centers also operate in St. Petersburg, Yekaterinburg and Novosibirsk.

TASS is a media partner of high-profile conferences, forums and exhibitions in Russia and abroad.[6] The agency organized the first News Agencies World Congress (NAWC) in 2004.[7]