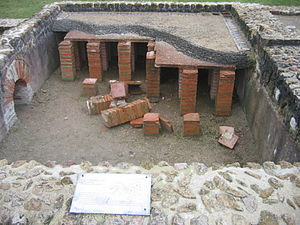 Hypocaust under the floor in a Roman villa in Vieux-la-Romaine, near Caen, France

A hypocaust (Latin: hypocaustum) is a system of central heating in a building that produces and circulates hot air below the floor of a room, and may also warm the walls with a series of pipes through which the hot air passes. This air can warm the upper floors as well.[1] The word derives from the Ancient Greek hypo meaning "under" and caust-, meaning "burnt" (as in caustic). The earliest reference to such a system suggests that the temple of Ephesus in 350 BC was heated in this manner,[2] although Vitruvius attributes its invention to Sergius Orata in c. 80 BC.[3] Its invention improved the hygiene and living conditions of citizens, and was a forerunner of modern central heating.

Ruins of the hypocaust under the floor of a Roman villa at La Olmeda, Province of Palencia (Castile and León, Spain). 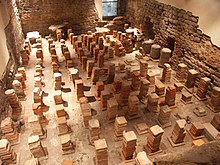 Caldarium from the Roman Baths at Bath, in Britain. The floor has been removed to reveal the empty spaces through which the hot air would flow.

Hypocausts were used for heating hot baths and other public buildings in Ancient Rome, but their use in homes was limited due to their high cost.[1] The ruins of Roman hypocausts have been found throughout Europe (for example in Italy, England,[4] Spain,[5] France, Switzerland and Germany[6]) and in Africa[6] as well.

Rooms intended to be the warmest were located nearest to the furnace below, the heat output of which was regulated by adjusting the amount of wood fed to the fire. It was expensive and labour-intensive to run a hypocaust, as it required constant attention to the fire and a lot of fuel, so it was a feature usually encountered only in large villas and public baths.

Vitruvius describes their construction and operation in his work De architectura in about 15 BC, including details about how fuel could be conserved by building the hot room (caldarium) for men next to that for women, with both adjacent to the tepidarium, so as to run the public baths efficiently. He also describes a device for adjusting the heat by a bronze ventilator in the domed ceiling.

Remains of many Roman hypocausts have survived throughout Europe, western Asia, and northern Africa.

Excavations at Mohenjo-daro in what is now Pakistan have unearthed what is believed to be a hypocaust lined with bitumen-coated bricks. If it fulfilled a similar role, the structure would pre-date the earliest Roman hypocaust by as much as 2000 years.[citation needed]

In 1984–1985, in the Georgian Soviet Socialist Republic, excavations in the ancient settlement of Dzalisi uncovered a large castle complex, featuring a well-preserved hypocaust built between 200–400 BC.[citation needed]

Dating back to 1000 BC,[8] Korean houses have traditionally used ondol to provide floor heating on similar principles as the hypocaust, drawing smoke from a wood fire typically used for cooking. Ondol heating was common in Korean homes until the 1960s, by which time dedicated ondol installations were typically used to warm the main room of the house, burning a variety of fuels such as coal and biomass.

On a smaller scale, in Northern China the Kang bed-stove has a long history.[9][10]

With the decline of the Roman Empire, the hypocaust fell into disuse, especially in the western provinces. In Britain, from c.400 until c.1900, it was thought that central heating did not exist, and hot baths were rare.[11] However, an evolution of the hypocaust was used in some monasteries in calefactories, or warming rooms, which were heated via underground fires, as in the Roman hypocaust, but retained heat via granite stones.[12] In Eastern Europe, the development of radiant ceramic or stone stoves were also used. In the Iberian Peninsula, the Roman system was adopted for the heating of Hispano-Islamic (Al Andalus) baths (hammams).[13] A derivation of hypocaust, the gloria, was in use in Castile until the arrival of modern heating. After the fuel (mainly wood) was reduced to ashes, the air intake was closed to keep hot air inside and to slow combustion.