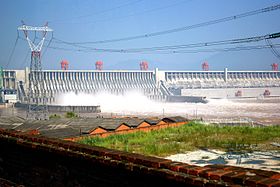 The Three Gorges Dam in China; the hydroelectric dam is the world's largest power station by installed capacity.

Hydropower or water power (from Greek: ὕδωρ, "water") is power derived from the energy of falling or fast-running water, which may be harnessed for useful purposes. Since ancient times, hydropower from many kinds of watermills has been used as a renewable energy source for irrigation and the operation of various mechanical devices, such as gristmills, sawmills, textile mills, trip hammers, dock cranes, domestic lifts, and ore mills. A trompe, which produces compressed air from falling water, is sometimes used to power other machinery at a distance.[1][2]

Since the early 20th century, the term has been used almost exclusively in conjunction with the modern development of hydroelectric power. International institutions such as the World Bank view hydropower as a means for economic development without adding substantial amounts of carbon to the atmosphere,[4] but dams can have significant negative social and environmental impacts.[5] 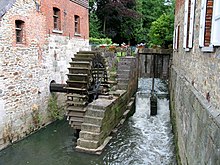 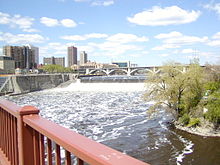 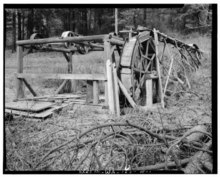 The earliest evidence of water wheels and watermills date back to the ancient Near East in the 4th century BC,[6] specifically in the Persian Empire before 350 BCE, in the regions of Iraq, Iran,[7] and Egypt.[8]

In the Roman Empire water-powered mills were described by Vitruvius by the first century BC.[9] The Barbegal mill had sixteen water wheels processing up to 28 tons of grain per day.[10] Roman waterwheels were also used for sawing marble such as the Hierapolis sawmill of the late 3rd century AD. Such sawmills had a waterwheel which drove two crank-and-connecting rods to power two saws. It also appears in two 6th century Eastern Roman saw mills excavated at Ephesus and Gerasa respectively. The crank and connecting rod mechanism of these Roman watermills converted the rotary motion of the waterwheel into the linear movement of the saw blades.[11]

In China, it was theorized that its water-powered trip hammers and bellows from as early as the Han dynasty (202 BC - 220 AD) were powered by water scoops,[12][13] but later historians believed that they were powered by waterwheels on the basis that water scoops would not have had the motive force to operate their blast furnace bellows.[14] Evidence of Han vertical waterwheels can be seen in two contemporary funeral ware models depicting water powered trip hammers.[15] The earliest texts to describe the device are the Jijiupian dictionary of 40 BC, Yang Xiong's text known as the Fangyan of 15 BC, as well as the Xin Lun written by Huan Tan about 20 AD.[16] It was also during this time that the engineer Du Shi (c. AD 31) applied the power of waterwheels to piston-bellows in forging cast iron.[17]

The power of a wave of water released from a tank was used for extraction of metal ores in a method known as hushing. The method was first used at the Dolaucothi Gold Mines in Wales from 75 AD onwards, but had been developed in Spain at such mines as Las Médulas. Hushing was also widely used in Britain in the Medieval and later periods to extract lead and tin ores.[18] It later evolved into hydraulic mining when used during the California Gold Rush.

In the Muslim world during the Islamic Golden Age and Arab Agricultural Revolution (8th–13th centuries), engineers made wide use of hydropower as well as early uses of tidal power,[19] and large hydraulic factory complexes.[20] A variety of water-powered industrial mills were used in the Islamic world, including fulling mills, gristmills, paper mills, hullers, sawmills, ship mills, stamp mills, steel mills, sugar mills, and tide mills. By the 11th century, every province throughout the Islamic world had these industrial mills in operation, from Al-Andalus and North Africa to the Middle East and Central Asia.[21] Muslim engineers also used water turbines, employed gears in watermills and water-raising machines, and pioneered the use of dams as a source of water power, used to provide additional power to watermills and water-raising machines.[22]

Islamic mechanical engineer Al-Jazari (1136–1206) described designs for 50 devices, many of them water powered, in his book, The Book of Knowledge of Ingenious Mechanical Devices, including clocks, a device to serve wine, and five devices to lift water from rivers or pools, though three are animal-powered and one can be powered by animal or water. These include an endless belt with jugs attached, a cow-powered shadoof, and a reciprocating device with hinged valves.[23][better source needed]

Hydraulic power networks used pipes to carry pressurized water and transmit mechanical power from the source to end users. The power source was normally a head of water, which could also be assisted by a pump. These were extensive in Victorian cities in the United Kingdom. A hydraulic power network was also developed in Geneva, Switzerland. The world-famous Jet d'Eau was originally designed as the over-pressure relief valve for the network.[26]

At the beginning of the Industrial Revolution in Britain, water was the main source of power for new inventions such as Richard Arkwright's water frame.[27] Although the use of water power gave way to steam power in many of the larger mills and factories, it was still used during the 18th and 19th centuries for many smaller operations, such as driving the bellows in small blast furnaces (e.g. the Dyfi Furnace)[28] and gristmills, such as those built at Saint Anthony Falls, which uses the 50-foot (15 m) drop in the Mississippi River.

In the 1830s, at the early peak in the US canal-building, hydropower provided the energy to transport barge traffic up and down steep hills using inclined plane railroads. As railroads overtook canals for transportation, canal systems were modified and developed into hydropower systems; the history of Lowell, Massachusetts is a classic example of commercial development and industrialization, built upon the availability of water power.[29]

Technological advances had moved the open water wheel into an enclosed turbine or water motor. In 1848 James B. Francis, while working as head engineer of Lowell's Locks and Canals company, improved on these designs to create a turbine with 90% efficiency.[30] He applied scientific principles and testing methods to the problem of turbine design. His mathematical and graphical calculation methods allowed the confident design of high-efficiency turbines to exactly match a site's specific flow conditions. The Francis reaction turbine is still in wide use today. In the 1870s, deriving from uses in the California mining industry, Lester Allan Pelton developed the high efficiency Pelton wheel impulse turbine, which utilized hydropower from the high head streams characteristic of the mountainous California interior.

Calculating the amount of available power

A hydropower resource can be evaluated by its available power. Power is a function of the hydraulic head and volumetric flow rate. The head is the energy per unit weight (or unit mass) of water.[citation needed] The static head is proportional to the difference in height through which the water falls. Dynamic head is related to the velocity of moving water. Each unit of water can do an amount of work equal to its weight times the head.

The power available from falling water can be calculated from the flow rate and density of water, the height of fall, and the local acceleration due to gravity:

Operators of hydroelectric stations will compare the total electrical energy produced with the theoretical potential energy of the water passing through the turbine to calculate efficiency. Procedures and definitions for calculation of efficiency are given in test codes such as ASME PTC 18 and IEC 60041. Field testing of turbines is used to validate the manufacturer's guaranteed efficiency. Detailed calculation of the efficiency of a hydropower turbine will account for the head lost due to flow friction in the power canal or penstock, rise in tail water level due to flow, the location of the station and effect of varying gravity, the temperature and barometric pressure of the air, the density of the water at ambient temperature, and the altitudes above sea level of the forebay and tailbay. For precise calculations, errors due to rounding and the number of significant digits of constants must be considered.[citation needed]

Some hydropower systems such as water wheels can draw power from the flow of a body of water without necessarily changing its height. In this case, the available power is the kinetic energy of the flowing water. Over-shot water wheels can efficiently capture both types of energy.[31] The water flow in a stream can vary widely from season to season. Development of a hydropower site requires analysis of flow records, sometimes spanning decades, to assess the reliable annual energy supply. Dams and reservoirs provide a more dependable source of power by smoothing seasonal changes in water flow. However reservoirs have significant environmental impact, as does alteration of naturally occurring stream flow. The design of dams must also account for the worst-case, "probable maximum flood" that can be expected at the site; a spillway is often included to bypass flood flows around the dam. A computer model of the hydraulic basin and rainfall and snowfall records are used to predict the maximum flood.[citation needed]

Social and environmental impact of dams

Play media
A hydropower scheme which harnesses the power of the water which pours down from the Brecon Beacons mountains, Wales; 2017

A shishi-odoshi powered by falling water breaks the quietness of a Japanese garden with the sound of a bamboo rocker arm hitting a rock.

This section is an excerpt from Watermill[edit] 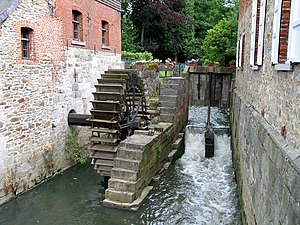 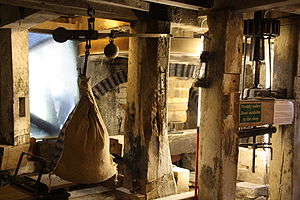 A watermill or water mill is a mill that uses hydropower. It is a structure that uses a water wheel or water turbine to drive a mechanical process such as milling (grinding), rolling, or hammering. Such processes are needed in the production of many material goods, including flour, lumber, paper, textiles, and many metal products. These watermills may comprise gristmills, sawmills, paper mills, textile mills, hammermills, trip hammering mills, rolling mills, wire drawing mills.

One major way to classify watermills is by wheel orientation (vertical or horizontal), one powered by a vertical waterwheel through a gear mechanism, and the other equipped with a horizontal waterwheel without such a mechanism. The former type can be further divided, depending on where the water hits the wheel paddles, into undershot, overshot, breastshot and pitchback (backshot or reverse shot) waterwheel mills. Another way to classify water mills is by an essential trait about their location: tide mills use the movement of the tide; ship mills are water mills onboard (and constituting) a ship.

Watermills impact the river dynamics of the watercourses where they are installed. During the time watermills operate channels tend to sedimentate, particularly backwater.[34] Also in the backwater area, inundation events and sedimentation of adjacent floodplains increase. Over time however these effects are cancelled by river banks becoming higher.[34] Where mills have been removed, river incision increases and channels deepen.[34]

Where there is a plentiful head of water it can be made to generate compressed air directly without moving parts. In these designs, a falling column of water is purposely mixed with air bubbles generated through turbulence or a venturi pressure reducer at the high-level intake. This is allowed to fall down a shaft into a subterranean, high-roofed chamber where the now-compressed air separates from the water and becomes trapped. The height of the falling water column maintains compression of the air in the top of the chamber, while an outlet, submerged below the water level in the chamber allows water to flow back to the surface at a lower level than the intake. A separate outlet in the roof of the chamber supplies the compressed air. A facility on this principle was built on the Montreal River at Ragged Shutes near Cobalt, Ontario in 1910 and supplied 5,000 horsepower to nearby mines.[35]

Hydroelectricity can also be used to store energy in the form of potential energy between two reservoirs at different heights with pumped-storage hydroelectricity. Water is pumped uphill into reservoirs during periods of low demand to be released for generation when demand is high or system generation is low.