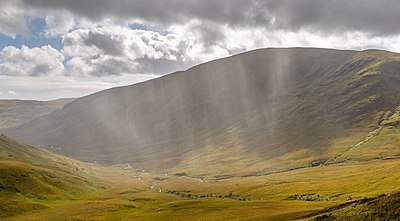 Rain over a Scottish catchment. Understanding the cycling of water into, through, and out of catchments is a key element of hydrology.

Hydrology (from Greek: ὕδωρ, "hýdōr" meaning "water" and λόγος, "lógos" meaning "study") is the scientific study of the movement, distribution, and management of water on Earth and other planets, including the water cycle, water resources, and environmental watershed sustainability. A practitioner of hydrology is called a hydrologist. Hydrologists are scientists studying earth or environmental science, civil or environmental engineering, and physical geography.[1] Using various analytical methods and scientific techniques, they collect and analyze data to help solve water related problems such as environmental preservation, natural disasters, and water management.[1]

Oceanography and meteorology are not included because water is only one of many important aspects within those fields. 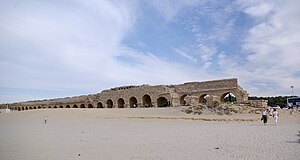 The Roman aqueduct at Caesaria Maritima, bringing water from the wetter Carmel mountains to the settlement.

Hydrology has been a subject of investigation and engineering for millennia. For example, about 4000 BC the Nile was dammed to improve agricultural productivity of previously barren lands. Mesopotamian towns were protected from flooding with high earthen walls. Aqueducts were built by the Greeks and Ancient Romans, while the history of China shows they built irrigation and flood control works. The ancient Sinhalese used hydrology to build complex irrigation works in Sri Lanka, also known for invention of the Valve Pit which allowed construction of large reservoirs, anicuts and canals which still function.

Marcus Vitruvius, in the first century BC, described a philosophical theory of the hydrologic cycle, in which precipitation falling in the mountains infiltrated the Earth's surface and led to streams and springs in the lowlands.[2] With the adoption of a more scientific approach, Leonardo da Vinci and Bernard Palissy independently reached an accurate representation of the hydrologic cycle. It was not until the 17th century that hydrologic variables began to be quantified.

Pioneers of the modern science of hydrology include Pierre Perrault, Edme Mariotte and Edmund Halley. By measuring rainfall, runoff, and drainage area, Perrault showed that rainfall was sufficient to account for the flow of the Seine. Mariotte combined velocity and river cross-section measurements to obtain a discharge, again in the Seine. Halley showed that the evaporation from the Mediterranean Sea was sufficient to account for the outflow of rivers flowing into the sea.[3]

Advances in the 18th century included the Bernoulli piezometer and Bernoulli's equation, by Daniel Bernoulli, and the Pitot tube, by Henri Pitot. The 19th century saw development in groundwater hydrology, including Darcy's law, the Dupuit-Thiem well formula, and Hagen-Poiseuille's capillary flow equation.

Since the 1950s, hydrology has been approached with a more theoretical basis than in the past, facilitated by advances in the physical understanding of hydrological processes and by the advent of computers and especially geographic information systems (GIS). (See also GIS and hydrology)

The central theme of hydrology is that water circulates throughout the Earth through different pathways and at different rates. The most vivid image of this is in the evaporation of water from the ocean, which forms clouds. These clouds drift over the land and produce rain. The rainwater flows into lakes, rivers, or aquifers. The water in lakes, rivers, and aquifers then either evaporates back to the atmosphere or eventually flows back to the ocean, completing a cycle. Water changes its state of being several times throughout this cycle.

The areas of research within hydrology concern the movement of water between its various states, or within a given state, or simply quantifying the amounts in these states in a given region. Parts of hydrology concern developing methods for directly measuring these flows or amounts of water, while others concern modeling these processes either for scientific knowledge or for making a prediction in practical applications.

Building a map of groundwater contours

Ground water is water beneath Earth's surface, often pumped for drinking water.[1] Groundwater hydrology (hydrogeology) considers quantifying groundwater flow and solute transport.[4] Problems in describing the saturated zone include the characterization of aquifers in terms of flow direction, groundwater pressure and, by inference, groundwater depth (see: aquifer test). Measurements here can be made using a piezometer. Aquifers are also described in terms of hydraulic conductivity, storativity and transmissivity. There are a number of geophysical methods[5] for characterising aquifers. There are also problems in characterising the vadose zone (unsaturated zone).[6]

Infiltration is the process by which water enters the soil. Some of the water is absorbed, and the rest percolates down to the water table. The infiltration capacity, the maximum rate at which the soil can absorb water, depends on several factors. The layer that is already saturated provides a resistance that is proportional to its thickness, while that plus the depth of water above the soil provides the driving force (hydraulic head). Dry soil can allow rapid infiltration by capillary action; this force diminishes as the soil becomes wet. Compaction reduces the porosity and the pore sizes. Surface cover increases capacity by retarding runoff, reducing compaction and other processes. Higher temperatures reduce viscosity, increasing infiltration.[7]:250–275

Soil moisture can be measured in various ways; by capacitance probe, time domain reflectometer or Tensiometer. Other methods include solute sampling and geophysical methods.[8] 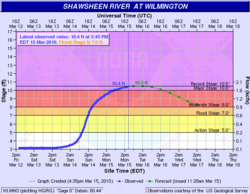 A flood hydrograph showing stage for the Shawsheen River at Wilmington.

Hydrology considers quantifying surface water flow and solute transport, although the treatment of flows in large rivers is sometimes considered as a distinct topic of hydraulics or hydrodynamics. Surface water flow can include flow both in recognizable river channels and otherwise. Methods for measuring flow once the water has reached a river include the stream gauge (see: discharge), and tracer techniques. Other topics include chemical transport as part of surface water, sediment transport and erosion.

One of the important areas of hydrology is the interchange between rivers and aquifers. Groundwater/surface water interactions in streams and aquifers can be complex and the direction of net water flux (into surface water or into the aquifer) may vary spatially along a stream channel and over time at any particular location, depending on the relationship between stream stage and groundwater levels. 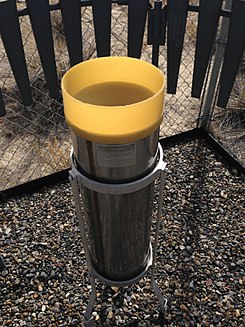 In some considerations, hydrology is thought of as starting at the land-atmosphere boundary[9] and so it is important to have adequate knowledge of both precipitation and evaporation. Precipitation can be measured in various ways: disdrometer for precipitation characteristics at a fine time scale; radar for cloud properties, rain rate estimation, hail and snow detection; rain gauge for routine accurate measurements of rain and snowfall; satellite for rainy area identification, rain rate estimation, land-cover/land-use, and soil moisture, for example.

Evaporation is an important part of the water cycle. It is partly affected by humidity, which can be measured by a sling psychrometer. It is also affected by the presence of snow, hail, and ice and can relate to dew, mist and fog. Hydrology considers evaporation of various forms: from water surfaces; as transpiration from plant surfaces in natural and agronomic ecosystems. Direct measurement of evaporation can be obtained using Simon's evaporation pan.

Estimates of changes in water storage around the Tigris and Euphrates Rivers, measured by NASA's GRACE satellites. The satellites measure tiny changes in gravitational acceleration, which can then be processed to reveal movement of water due to changes in its total mass.

Remote sensing of hydrologic processes can provide information on locations where in situ sensors may be unavailable or sparse. It also enables observations over large spatial extents. Many of the variables constituting the terrestrial water balance, for example surface water storage, soil moisture, precipitation, evapotranspiration, and snow and ice, are measurable using remote sensing at various spatial-temporal resolutions and accuracies.[10] Sources of remote sensing include land-based sensors, airborne sensors and satellite sensors which can capture microwave, thermal and near-infrared data or use lidar, for example.

In hydrology, studies of water quality concern organic and inorganic compounds, and both dissolved and sediment material. In addition, water quality is affected by the interaction of dissolved oxygen with organic material and various chemical transformations that may take place. Measurements of water quality may involve either in-situ methods, in which analyses take place on-site, often automatically, and laboratory-based analyses and may include microbiological analysis.

Observations of hydrologic processes are used to make predictions of the future behavior of hydrologic systems (water flow, water quality). One of the major current concerns in hydrologic research is "Prediction in Ungauged Basins" (PUB), i.e. in basins where no or only very few data exist.

By analyzing the statistical properties of hydrologic records, such as rainfall or river flow, hydrologists can estimate future hydrologic phenomena. When making assessments of how often relatively rare events will occur, analyses are made in terms of the return period of such events. Other quantities of interest include the average flow in a river, in a year or by season.

These estimates are important for engineers and economists so that proper risk analysis can be performed to influence investment decisions in future infrastructure and to determine the yield reliability characteristics of water supply systems. Statistical information is utilized to formulate operating rules for large dams forming part of systems which include agricultural, industrial and residential demands. 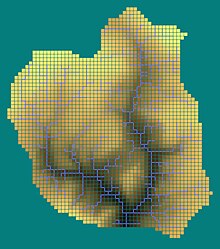 Recent research in hydrological modeling tries to have a more global approach to the understanding of the behavior of hydrologic systems to make better predictions and to face the major challenges in water resources management.

Water movement is a significant means by which other material, such as soil, gravel, boulders or pollutants, are transported from place to place. Initial input to receiving waters may arise from a point source discharge or a line source or area source, such as surface runoff. Since the 1960s rather complex mathematical models have been developed, facilitated by the availability of high-speed computers. The most common pollutant classes analyzed are nutrients, pesticides, total dissolved solids and sediment.