Hutsuls (Ukrainian: гуцули, hutsuly; Polish: Hucuł, plural Huculi, Hucułowie; Romanian: huțul, plural huțuli) is an ethnic group spanning parts of western Ukraine and Romania (i.e. parts of Bukovina and Maramureş). While they often have been officially designated as a subgroup of Ukrainians,[3] Hutsuls mostly regard themselves as a part of a broader Rusyn ethnicity, alongside two other groups from the cross-border region of Transcarpathia: the Boykos and Lemkos.[4][5][6]

The origin of the name Hutsul is uncertain.[7] The most common derivations are from the Romanian word for "outlaw" (cf. Rom. hoț–"thief", hoțul–"the thief"), and the Slavic kochul (Ukr. kochovyk–"nomad") which is a reference to the semi-nomadic shepherd lifestyle or the inhabitants who fled into the mountains after the Mongol invasion.[4][7] Other proposed derivations include from the Turkic tribe of the Utsians or Uzians, and even to the name of the Moravian Grand Duke Hetsyla, among others.[8] As the name is first attested in 1816, it is considered to be of recent origin and as an exonym, used by neighboring groups and not Hutsuls themselves, although some have embraced it.[4] The region inhabited by Hutsuls is named as Hutsulshchyna.[9][10] Their name is also found in the name of Hutsul Alps,[11] Hutsul Beskyd,[12] Hutsulshchyna National Park,[13] and National Museum of Hutsulshchyna and Pokuttya Folk Art.[14]

Painting of a Hutsul man and woman in 1902 by Seweryn Obst. 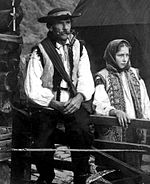 Hutsuls inhabit areas situated between the south-east of those inhabited by the Boykos, down to the northern part of the Romanian segment of the Carpathians. Several hypotheses account for the origin of the Hutsuls, however, like all the Rusyns, they most probably have a diverse ethnogenetic origin. It is generally considered to be descendants of the White Croats, a Slavic tribe that inhabited the area,[4][7][15] also Tivertsi, and possibly Ulichs who had to leave their previous home near the Southern Bug river under pressure from the Pechenegs.[4][7][16] There is also considered a relation to Vlach shepherds who later immigrated from Transylvania,[15][17] because of which some scholars like Romanian historian Nicolae Iorga argued that "huțuli" or "huțani" are denationalized Vlachs / Romanians.[18][19]

Hutsul is usually considered to be a dialect of Western Ukrainian with some Polish influences.[20][21][22][23] Since the joining of Transcarpathia by Soviet Union compulsory education has been conducted only in standardized literary Ukrainian. In recent years there have been grassroots efforts to keep the traditional Hutsul dialect alive.

Way of life and culture 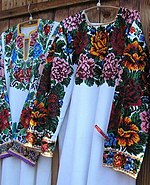 Traditional Hutsul culture is often represented by the colorful and intricate craftsmanship of their clothing, sculpture, architecture, woodworking, metalworking (especially in brass), rug weaving, pottery, and egg decorating (see pysanka). Along with other Hutsul traditions, as well as their songs and dances, this culture is often celebrated and highlighted by the different countries that Hutsuls inhabit.

Ukrainian Hutsul culture bears a resemblance to neighboring cultures of western and southwestern Ukraine,[24][25] particularly Lemkos and Boykos. These groups also share similarities with other Slavic highlander peoples, such as the Gorals in Poland and Slovakia.[26] Similarities have also been noted with some Vlach cultures such as the Moravian Wallachians in the Czech Republic, as well as some cultures in Romania.[27] Most Hutsuls belong to the Ukrainian Greek Catholic Church and the Ukrainian Orthodox Church.

Hutsul society was traditionally based on forestry and logging, as well as cattle and sheep breeding; the Hutsuls are credited with having created the breed of horse known as the Hucul pony. One of the main attributes of Hutsuls' is their Shepherd's axe (bartka), a small axe with a long handle that is still used to this day for chopping wood, as a cane, for fighting and traditional ceremonies. They would often be intricately decorated with traditional wood carving designs and passed on from generation to generation especially upon marriage.[28] They use unique musical instruments, including the "trembita" (trâmbiţa), a type of alpenhorn, as well multiple varieties of the fife, or sopilka, that are used to create unique folk melodies and rhythms. Also frequently used are the duda (bagpipe), the drymba (Jew's harp), and the tsymbaly (hammered dulcimer).

The Hutsuls served as an inspiration for many writers, such as Ivan Franko, Lesya Ukrainka, Mykhailo Kotsiubynsky, Vasyl Stefanyk, Marko Cheremshyna, Mihail Sadoveanu and Stanisław Vincenz, and painters such as Kazimierz Sichulski and Teodor Axentowicz—famous for his portraits and subtle scenes of Hutsul life—and Halyna Zubchenko. Sergei Parajanov's 1965 film Shadows of Forgotten Ancestors (Тіні забутих предків), which is based on the book by Mykhailo Kotsiubynsky, portrays scenes of traditional Hutsul life.

Every summer, the village of Sheshory in Ukraine hosts a three-day international festival of folk music and art. Two Hutsul-related museums are located in Kolomyia, Ukraine: the Pysanky museum and the Museum of Hutsul and Pokuttya Folk Art. Traditional Hutsul sounds and moves were used by the Ukrainian winner of the 2004 Eurovision song contest, Ruslana Lyzhychko.

The Romanian Hutsuls have a Festival of Hutsuls at the Moldova-Sulița village in Suceava county.