Hurricane Emily was a powerful, early season, Cape Verde tropical cyclone that caused significant damage across the Caribbean Sea to Mexico. It was also the earliest forming Category 5 Atlantic hurricane on record in a season and the most intense to form before August. At the time, Emily was the earliest-forming fifth named storm in the Atlantic on record; this record has since been surpassed by 2020's Tropical Storm Edouard. After forming on July 10, 2005, the storm moved through the central Atlantic Ocean before passing through the Windward Islands on July 14. Tracking generally towards the west-northwest, the storm gradually intensified as it traversed the Caribbean, peaking as a Category 5 hurricane on July 16, marking the earliest date for a storm to do so during the course of a given year. The system subsequently made landfall in the Yucatán Peninsula as a Category 4. Quickly crossing the peninsula, Emily emerged into the Gulf of Mexico and reorganized. On July 20, the storm struck Tamaulipas as a major hurricane and rapidly dissipated within 24 hours. The storm caused significant damage along its path, with up to $1.01 billion (2005 USD) in damages recorded, as well as causing 17 fatalities. Emily is the most recent (and costliest) Category 5 storm to not have its name retired.

Map plotting the track and the intensity of the storm, according to the Saffir–Simpson scale

On July 6, a tropical wave moved off the coast of Africa. Moving westward, the disturbance gradually organized until July 10, at which point convection became more concentrated, and it is estimated Tropical Depression Five formed in the central tropical Atlantic that evening.[1] Late on July 11, it strengthened and was named Tropical Storm Emily. Initially forecast to strengthen rapidly and move west-northwest through the Greater Antilles, Emily instead moved almost due west toward the Windward Islands, remaining a moderate tropical storm. The storm languished while moving quickly west, and struggled with maintaining its form. Contrary to the normal occurrence that hurricanes leave a cold wake behind, Hurricane Dennis had made portions of the Caribbean Sea warmer,[2] and therefore more favorable for tropical cyclone development. Late on July 13, Emily strengthened rapidly and reached hurricane strength while passing north of Tobago and entering the eastern Caribbean. On July 14, Emily made landfall in northern Grenada with 85 mph (135 km/h) winds.[1] Overall damage was fairly minor to moderate as the island were still repairing from a much more destructive and powerful storm such as Ivan, 10 months ago.

The intensification trend picked up again the next day with a fairly rapid drop in the storm's central pressure as it entered the southeastern Caribbean Sea, a region typically unfavorable for intensification. Hurricane Emily's winds increased in reaction, briefly bringing the storm to Category 4 strength early on July 15. During the day, the storm's strength fluctuated greatly, dropping to a Category 2 storm and then rebuilding to Category 4. On July 16, Emily strengthened considerably, making it the strongest hurricane ever on record to form in the month of July with peak winds of 160 mph (260 km/h), the earliest known Category 5 hurricane in the Atlantic basin. Initially at this point Emily was thought to have peaked as a Category 4 storm, but the post-storm analysis showed it was indeed a Category 5 hurricane.[1] Unrelated to Emily, Typhoon Haitang developed and intensified into a Category 5-equivalent super typhoon around the same time Emily intensified into a Category 5 hurricane, marking the first time since Typhoons Ivan and Joan in 1997 when two tropical cyclones of Category 5 strength existed simultaneously in the Northern Hemisphere.[citation needed] The storm weakened slightly as it continued westward, and remained a Category 4 while passing south of Jamaica and, on July 17, the Cayman Islands. Emily continued on its nearly straight track to the west-northwest, weakening somewhat but remaining at Category 4 until striking Cozumel just before mainland landfall at Playa del Carmen at 06:30 UTC on July 18. Sustained winds were 135 mph (215 km/h), and the eyewall passed directly over Cozumel.

The center of circulation emerged over the Gulf of Mexico later that morning.[1] Passage over land disrupted the hurricane's center of circulation, and it had weakened to a minimal hurricane with wind speeds of 75 mph (120 km/h). However, several hours over the warm waters of the western Gulf provided the energy needed for Emily to regenerate, and by midnight wind speeds were increasing. The increase in wind speed stalled, but the storm continued to become better organized. Emily started to show very symmetrical outflow, but the hurricane's strongest winds were being found at three different distances from the center. However, the outer wind radii subsided in the end, and the inner core prevailed. The result was a rapid strengthening of the inner core on the evening of July 19. The pressure dropped about 30 millibars and the winds went from 90 mph (145 km/h) to more than 125 mph (200 km/h), all within a few hours.[1]

Further strengthening was expected by forecasters, but did not come.[1] The storm's motion slowed, and the center began wobbling erratically toward the coast. The storm made landfall around 11:00 UTC on July 20 near San Fernando in Tamaulipas. The storm had sustained winds of 125 mph (200 km/h), Category 3 on the Saffir-Simpson Hurricane Scale. After heading inland over northeast Mexico, it dissipated over the Sierra Madre Oriental on July 21.[1] 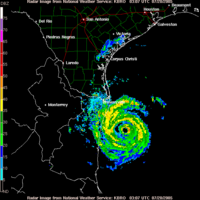 Hurricane Emily, as seen by the US National Weather Service's NEXRAD in Brownsville, Texas at 03:07 UTC July 20. The storm's eye is clearly visible, surrounded by the strong storms of the eyewall. At imaging time, Emily was a Category 3 hurricane with 125 mph (205 km/h) winds, was moving west-northwest at 7 mph (11 km/h), and was roughly 100 miles (160 km) away from the location of landfall.

In Mexico, tens of thousands of tourists and residents were evacuated from the beach resorts in and around Cancún, the Riviera Maya, and Cozumel.[3] Hotel guests were evacuated on Saturday afternoon, and staff on Sunday afternoon. Though some hotel guests in second floor rooms and above were given the option to be bussed into the center of Cancun to safe houses and shelters or to stay and wait out the storm in only the modern built hotels and resorts. Most of the remaining guests were restricted to their rooms and were not allowed out on the beach areas. No alcohol was sold in Cancun for 36 hours prior to the arrival of the storm, in an attempt to avoid drunken tourists being injured during the night. Two helicopter pilots were killed when their aircraft crashed while evacuating offshore oil platforms operated by Pemex. A German resident was electrocuted while on his roof in Playa del Carmen.[4]

On July 14, Emily hit Grenada which was still recovering from the impact of Hurricane Ivan less than a year earlier. Emily resulted in one reported fatality and significant damage in the northern part of the country, including Carriacou which had been spared the worst effects of Ivan. 16 houses were destroyed and well over 200 more were damaged, and two of the main hospitals were flooded.[5] Damages in Grenada amounted to $110.4 million.[6]

Landslides were reported in eastern Jamaica, triggered by heavy rain as the storm passed south of the island.[5] Five people were killed due to an accident caused by flash flooding.[7] Damages in Jamaica were estimated at $65 million.[6] Damage was also reported in Trinidad and Tobago, where landslides and flooding damaged several homes.[5] In Honduras, a man drowned in a river swollen by rains from Emily.[4]

Striking the Yucatán Peninsula on July 18 as a Category 4 hurricane, widespread damage was expected from 135 mph (215 km/h) winds; however, these winds were confined to a small area around Emily's center. Areas in Playa del Carmen, Tulum and Cozumel sustained the most severe impact. In a few instances, concrete utility poles were snapped in half by powerful wind gusts. Due to the relatively fast movement of Emily, rainfall was fairly light, peaking at 4.9 in (120 mm). Few meteorological reports exist during Emily's passage of the Yucatán, though an unofficial station recorded a storm surge of 15 ft (4.6 m) in San Miguel, Cozumel.[1] Along the mainland, surge heights were generally less than 4 ft (1 m). Additionally, waves reached 13 ft (4 m), resulting in some beach erosion and damage to dunes and coral reefs. Additionally, 0.7 mi (1.1 km) of retaining walls sustained damage, leaving areas vulnerable to flooding from future storms.[17]

The high winds produced by Emily caused considerable impact in Quintana Roo, especially in the municipality of Solidaridad, leaving nearly 200,000 residences without power. In terms of structural damage, 851 homes were impacted in varying degrees. Roughly 13,345 acres (5,400 hectares) of forests and agricultural land was affected by the storm; some swathes of trees experienced defoliation. The most substantial losses associated with the hurricane stemmed from the tourism industry, with hotels experiencing 947 million pesos ($88.7 million) worth of damage. More than 12,500 rooms, nearly one-fifth of the state's available hotel infrastructure, sustained damage. Overall, damage in the state reached 1.11 billion pesos ($104.3 million).[17]

Emily's second landfall as a strong Category 3 hurricane brought significant damage to the northeast coast of Mexico. In the fishing community of Laguna Madre, over 80% of the buildings were destroyed as a result of the storm surge.[1] Several communities on the remote coast of Tamaulipas were isolated after the storm, and major coastal flooding was reported along with heavy wind damage, with numerous homes destroyed. Inland flooding was also reported in Monterrey.[18]

Communication to the Riviera Maya area was difficult after the storm; not all cellular phones were receiving coverage to the area, land lines were down, and electricity was out. About 18,000 people in 20 low-lying communities in the state of Tamaulipas, just south of the U.S.-Mexican border, were evacuated. Including losses sustained by the oil industry, damage in Mexico amounted to 8.87 billion pesos ($834.3 million).[14]

Total rainfall from Emily in the United States

In southern Texas, damage was relatively minor despite the proximity of the storm.[19] Portions of the state experienced tropical storm force winds and gusts as high as 65 mph (100 km/h), resulting in scattered roof damage. Along the coast, a storm surge of 4.26 ft (1.30 m) flooded portions of Texas State Highway 100.[1][20] No significant structural damage was reported, although some trees were down and over 30,000 customers lost electricity.[19] Rainfall from the storm peaked at 5.2 inches in Mercedes, Texas. Additionally, eight tornadoes touched down in Texas as a result of Emily, damaging or destroying several homes. Some positive effects were noted; the remains of Emily passed farther west into Texas and delivered some badly needed rainfall, helping relieve a drought.[18] Agricultural losses in Texas amounted to $4.7 million,[16] while property losses reached $225,000.[15]