The Hundred Days Offensive (8 August to 11 November 1918) was a series of massive Allied offensives which ended the First World War. Beginning with the Battle of Amiens (8–12 August) on the Western Front, the Allies pushed the Central Powers back, undoing their gains from the Spring Offensive. The Germans retreated to the Hindenburg Line, but the Allies broke through the line with a series of victories, starting with the Battle of St Quentin Canal on 29 September. The offensive, together with a revolution breaking out in Germany, led to the Armistice of 11 November 1918 which ended the war with an Allied victory. The term "Hundred Days Offensive" does not refer to a battle or strategy, but rather the rapid series of Allied victories against which the German armies had no reply.

The Spring Offensive of the German Army on the Western Front had begun on 21 March 1918 with Operation Michael and had petered out by July. The Germans had advanced to the River Marne, but failed to achieve their aim of a victory that would decide the war. When Operation Marne-Rheims ended in July, the Allied supreme commander Ferdinand Foch ordered a counter-offensive, which became known as the Second Battle of the Marne. The Germans, recognizing their untenable position, withdrew from the Marne to the north. For this victory, Foch was granted the title Marshal of France.

After the Germans had lost their forward momentum, Foch considered the time had arrived for the Allies to return to the offensive. The American Expeditionary Force (AEF) under General John J. Pershing was present in France in large numbers and invigorated the Allied armies with its extensive resources.[9]:472 Pershing was keen to use his army as an independent force. The British Expeditionary Force (BEF) had also been reinforced by large numbers of troops returned from the Sinai and Palestine campaign and the Italian front and replacements previously held back in Britain by Prime Minister David Lloyd George.[9]:155

A number of proposals were considered and Foch agreed on a proposal by Field Marshal Sir Douglas Haig, commander-in-chief of the BEF, to strike on the River Somme, east of Amiens and south-west of the site of the 1916 Battle of the Somme, to force the Germans away from the vital Amiens–Paris railway.[9]:472 The Somme was chosen because it remained the boundary between the BEF and the French armies, along the Amiens–Roye road, allowing the two armies to cooperate. The Picardy terrain provided a good surface for tanks, which was not the case in Flanders, and the defences of the German 2nd Army under General Georg von der Marwitz were relatively weak, having been subjected to continual raiding by the Australians in a process termed peaceful penetration.

The Battle of Amiens (with the French attack on the southern flank called the Battle of Montdidier) opened on 8 August, with an attack by more than 10 Allied divisions—Australian, Canadian, British and French forces—with more than 500 tanks.[9]:497 Through careful preparation, the Allies achieved surprise.[10]:20,95[11] The attack, led by the British Fourth Army, broke through the German lines, and tanks attacked German rear positions, sowing panic and confusion. By the end of the day, a gap 15 mi (24 km) wide had been created in the German line south of the Somme.[12] The Allies had taken 17,000 prisoners and 339 guns. Total German losses were estimated to be 30,000 men, while the Allies had suffered about 6,500 killed, wounded and missing. The collapse in German morale led Erich Ludendorff to dub it "the Black Day of the German Army".[10]:20,95

The advance continued for three more days but without the spectacular results of 8 August, since the rapid advance outran the supporting artillery and ran short of supplies.[13] During those three days, the Allies had managed to gain 12 mi (19 km). Most of this was taken on the first day as the arrival of German reinforcements after this slowed the Allied advance.[14] On 10 August, the Germans began to pull out of the salient that they had managed to occupy during Operation Michael in March, back towards the Hindenburg Line.[15] 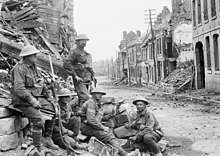 1 September 1918, Péronne (Somme). A machine gun position established by the Australian 54th Battalion during its attack on German forces in the town.

On 15 August, Foch demanded that Haig continue the Amiens offensive, even though the attack was faltering as the troops outran their supplies and artillery and German reserves were being moved to the sector[citation needed]. Haig refused and prepared to launch a fresh offensive by the Third Army at Albert (the Battle of Albert), which opened on 21 August.[9]:713–4 The offensive was a success, pushing the German 2nd Army back over a 34 mi (55 km) front. Albert was captured on 22 August.[16] The attack was widened on the south, by the French Tenth Army starting the Second Battle of Noyon on 17 August, capturing the town of Noyon on 29 August.[16] On 26 August, to the north of the initial attack, the First Army widened the attack by another 7 mi (11 km) with the Second Battle of Arras of 1918. Bapaume fell on 29 August (during the Second Battle of Bapaume).

Advance to the Hindenburg Line 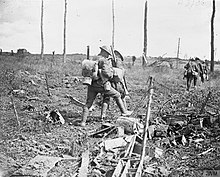 Troops of the Royal Inniskilling Fusiliers, 36th (Ulster) Division, advancing from Ravelsburg Ridge to the outskirts of Neuve Eglise, 1 September 1918.

With the front line broken, a number of battles took place as the Allies forced the Germans back to the Hindenburg Line. East of Amiens (after the Battle of Amiens), with artillery brought forward and munitions replenished, the Fourth Army also resumed its advance, with the Australian Corps crossing the Somme River on the night of 31 August, breaking the German lines during the Battle of Mont Saint-Quentin.[17] On 26 August, to the north of the Somme, the First Army widened the attack by another 7 mi (11 km) with the Second Battle of Arras of 1918, which includes the Battle of the Scarpe (1918) (26 August) and the Battle of Drocourt-Queant Line (2 September).[18]

Battles of the Hindenburg Line 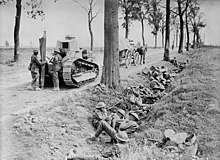 Canadian troops shelter in a ditch along the Arras-Cambrai road

Foch planned a series of concentric attacks on the German lines in France (sometimes referred to as the Grand Offensive), with the various axes of advance designed to cut German lateral communications, intending that the success of an attack would enable the entire front line to be advanced.[10]:205–6 The main German defences were anchored on the Hindenburg Line, a series of defensive fortifications stretching from Cerny on the Aisne river to Arras.[20] Before Foch's main offensive was launched, the remaining German salients west and east of the line were crushed at Havrincourt and St Mihiel on 12 September and at the Battle of Épehy and the Battle of the Canal du Nord on 27 September.[10]:217

The first attack of the Grand Offensive was launched on 26 September by the French and the AEF in the Meuse-Argonne Offensive (this offensive includes the Battle of Somme-Py, the Battle of Saint-Thierry, the Battle of Montfaucon, and the Battle of Chesne of 1 November). On 28 September, the Army Group under Albert I of Belgium (the Belgian Army, the British Second Army and the French Sixth Army), attacked near Ypres in Flanders (the Fifth Battle of Ypres). Both attacks made good progress initially but were then slowed by supply difficulties. The Grand Offensive involved attacking over difficult terrain, resulting in the Hindenburg Line not being broken until 17 October.[citation needed]

On 29 September, the central attack on the Hindenburg Line commenced, with the British Fourth Army (with British, Australian and American forces)[21] attacking in the Battle of St Quentin Canal and the French First Army attacking fortifications outside St Quentin. By 5 October, the Allies had broken through the entire depth of the Hindenburg defences over a 19 mi (31 km) front.[19]:123 General Rawlinson wrote, "Had the Boche [Germans] not shown marked signs of deterioration during the past month, I should never have contemplated attacking the Hindenburg line. Had it been defended by the Germans of two years ago, it would certainly have been impregnable…."

On 8 October, the First and Third British Armies broke through the Hindenburg Line at the Second Battle of Cambrai.[22] This collapse forced the German High Command to accept that the war had to be ended. The evidence of failing German morale also convinced many Allied commanders and political leaders that the war could be ended in 1918; previously, all efforts had been concentrated on building up forces to mount a decisive attack in 1919. 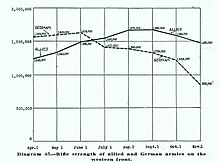 Comparison of Allied and German frontline rifle strength before and after the Hundred Days Offensive and the arrival of additional American troops.[23]

Through October, the German armies retreated through the territory gained in 1914. The Allies pressed the Germans back toward the lateral railway line from Metz to Bruges, which had supplied the front in Northern France and Belgium for much of the war. As the Allied armies reached this line, the Germans were forced to abandon increasingly large amounts of heavy equipment and supplies, further reducing their morale and capacity to resist.[24]