Hudson Bay Lowlands is a vast wetland located between the Canadian Shield and southern shores of Hudson Bay and James Bay. Most of the area lies within the province of Ontario, with smaller portions reaching into Manitoba and Quebec. Many wide and slow-moving rivers flow through this area toward the salt water of Hudson Bay: these include the Churchill, Nelson and Hayes in Manitoba, Severn, Fawn, Winisk, Asheweig, Ekwan, Attawapiskat, and Albany in Ontario, and the Harricana, Rupert and Eastmain in Quebec.[1] This is the largest wetland in Canada, and one of the largest in the world.[2] The region can be subdivided into three bands running roughly northwest to southeast: the Coastal Hudson Bay Lowland (a narrow band along the northern coast),[3] Hudson Bay Lowland (a broader band extending to slightly south of the Ekwan River),[4] and James Bay Lowland (all the rest of the southern/eastern lands, making up close to 50% of the total Lowlands area).[5]

The entire area was covered by ice during the last glaciation, and the peatlands have accumulated over the last ten thousand years. Plants from more temperate regions mix with arctic species.[6] A majority of the wetland is peat bog, although salt marshes occur along the coast, and marshes and wet meadows occur along the major rivers. The wetlands provide important habitat for migratory birds including shorebirds (e.g., yellow rail) and waterfowl (e.g., snow geese). Large mammals include polar bear and wolverine.[2] 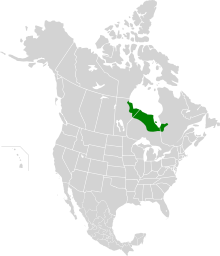 The local Ojibwa and Cree most likely came into contact with the region but did not populate the region due to the harsh, undesirable conditions and poor drainage patterns of the area. When Europeans arrived in the area, The Hudson's Bay Company set up trading posts such as Rankin Inlet, some of which remain populated today. However, these never grew into sizable towns, again because of the poor living conditions and climate. To this day, not all of the lowlands have been properly explored.[citation needed] There are a few small First Nations settlements on the southern shore of Hudson Bay Lowlands at places like Moose Factory, Moosonee, Attawapiskat, and Fort Severn.

The region is named after the nearby inland sea, Hudson Bay, the second largest in the world. The entire area drains into the bay through rivers such as the Churchill, Severn, and Attawapiskat. The region is located in the extreme north of Ontario, extending into both Manitoba to the west and Quebec in the east, and covers around 25 percent of Ontario's total land area (approximately 228,400  km2). The area was covered in ice during the last ice age, and then flooded as the ice receded, leaving behind plains that are slowly rising out of the ocean due to post-glacial rebound.[1] Peatlands, both bogs and fens now cover much of the landscape,[7] with other kinds of wetlands along rivers and the coast. The climate of the region depends largely on the water surface of the bay, which heats rapidly in the summer, breaking the ice and bringing rains to the lowlands. In the winter the bay freezes over again, bringing freezing temperatures and winds. The vegetation is mostly conifer forest and peatland, with typical sub arctic and boreal plants.[6]

The forestry industry is present in the coniferous forests of the region. There is a growing tourist industry which includes fly-fishing and beluga and seal-watching excursions.[8]