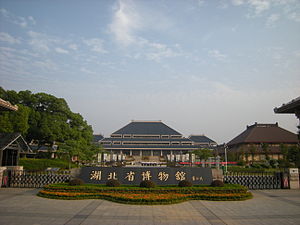 Exterior of the museum

The Hubei Provincial Museum (Chinese: 湖北省博物馆) is one of the best known museums in China, with a large amount of state-level historic and cultural relics.[1] Established in 1953, the museum moved to its present location in 1960 and gained its present name in 1963. Since 1999 a number of new buildings have been added. The museum received 1,992,512 visitors in 2017.[2]

The museum is located in the Wuchang District of Wuhan, Hubei Province, not far from the west shore of Wuhan's East Lake. It has a collection of over 200,000 objects, including the Sword of Goujian, an ancient set of bronze bells (Bianzhong) and extensive artifacts from the Tomb of Marquis Yi of Zeng and the tombs at Baoshan. The particular importance of several of the archaeological items in the museum's collection has been recognized by the national government by including them into the short list of Chinese cultural relics forbidden to be exhibited abroad.

Replica instruments of ancient originals are played at the Hubei Provincial Museum. A replica set of bronze concert bells is in the background and a set of stone chimes is to the right