Tracing its history to 1867, from its outset Howard has been nonsectarian and open to people of all sexes and races. It offers undergraduate, graduate, and professional degrees in more than 120 programs, more than any other HBCU in the nation.[6]

Shortly after the end of the American Civil War, members of The First Congregational Society of Washington considered establishing a theological seminary for the education of black clergymen. Within a few weeks, the project expanded to include a provision for establishing a university. Within two years, the University consisted of the Colleges of Liberal Arts and Medicine. The new institution was named for General Oliver Otis Howard, a Civil War hero, who was both the founder of the University and, at the time, Commissioner of the Freedmen's Bureau. Howard later served as President of the University from 1869 to 1874.[7]

The U.S. Congress chartered Howard on March 10, 1867, and much of its early funding came from endowment, private benefaction, and tuition. (In the 20th and 21st centuries an annual congressional appropriation, administered by the U.S. Department of Education, funds Howard University and Howard University Hospital).[8] In its first five years of operation, Howard University educated over 150,000 freed slaves.[9]

Many improvements were made on campus. Howard Hall was renovated and made a dormitory for women.[10]

The Great Depression years of the 1930s brought hardship to campus. Despite appeals from Eleanor Roosevelt, Howard saw its budget cut below Hoover administration levels during the Presidency of Franklin D. Roosevelt.[11]

In the 1930s, Howard University still had segregated student housing.[12][13]

Howard University played an important role in the Civil Rights Movement on a number of occasions. Alain Locke, Chair of the Department of Philosophy and first African American Rhodes Scholar, authored The New Negro, which helped to usher in the Harlem Renaissance.[14] Ralph Bunche, the first Nobel Peace Prize winner of African descent, served as chair of the Department of Political Science.[15] Beginning in 1942, Howard University students pioneered the "stool-sitting" technique of occupying stools at a local cafeteria which denied service to African Americans blocking other customers waiting for service.[16] This tactic was to play a prominent role in the later Civil Rights Movement. By January 1943, students had begun to organize regular sit-ins and pickets at cigar stores and cafeterias around Washington, D.C. which refused to serve them because of their race. These protests continued until the fall of 1944.[17]

The first sitting president to speak at Howard was Calvin Coolidge in 1924. His graduation speech was entitled, "The Progress of a People", and highlighted the accomplishments to date of the blacks in America since the Civil War. His concluding thought was, "We can not go out from this place and occasion without refreshment of faith and renewal of confidence that in every exigency our Negro fellow citizens will render the best and fullest measure of service whereof they are capable."[21] 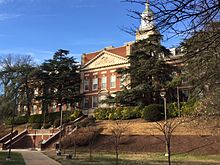 The Lower Quadrangle behind Founders Library; also known as "The Valley."

In 1965, President Lyndon B. Johnson delivered a speech to the graduating class at Howard, where he outlined his plans for civil rights legislation and endorsed aggressive affirmative action to combat the effects of years of segregation of blacks from the nation's economic opportunities.[22] At the time, the voting rights bill was still pending in the House of Representatives.[23]

Also in 1975, Jeanne Sinkford became the first female dean of any American dental school when she was appointed as the dean of Howard University's school of dentistry.[24]

In 1989, Howard gained national attention when students rose up in protest against the appointment of then-Republican National Committee Chairman Lee Atwater as a new member of the university's board of trustees. Student activists disrupted Howard's 122nd anniversary celebrations, and eventually occupied the university's Administration building.[25] Within days, both Atwater and Howard's President, James E. Cheek, resigned.

In April 2007, the head of the faculty senate called for the ouster of Howard University President H. Patrick Swygert, saying the school was in a state of crisis and it was time to end "an intolerable condition of incompetence and dysfunction at the highest level."[26] This came on the heels of several criticisms of Howard University and its management. The following month, Swygert announced he would retire in June 2008.[27] The university announced in May 2008 that Sidney Ribeau of Bowling Green State University would succeed Swygert as president.[28] Ribeau appointed a Presidential Commission on Academic Renewal to conduct a year-long self-evaluation that resulted in reducing or closing 20 out of 171 academic programs.[29] For example, they proposed closing the undergraduate philosophy major and African studies major.[29]

In May 2016, President Barack Obama delivered a commencement address at Howard University encouraging the graduates to become advocates for racial change and to prepare for future challenges.[36]

In 2018, nearly 1,000 students held a sit-in demanding injunction over the administration's use of funding. After the student protest ended, faculty voted "no confidence" in the university president, chief operating officer, provost, and board of trustees.[37] The nine-day protest ended with university officials promising to meet most of their demands.[38]

In July 2020, philanthropist MacKenzie Scott donated $40 million to Howard. Her donation is the largest single gift in Howard and HBCU history.[39] 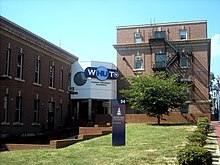 The 256-acre (1.04 km2; 0.400 sq mi) campus, often referred to as "The Mecca", is in northwest Washington, D. C.[40] Major improvements, additions and changes occurred at the school in the aftermath of World War I. New buildings were built under the direction of architect Albert Cassell.[41][40] 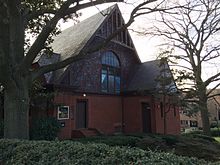 Howard's Board of Trustees established the Howard University Gallery of Art in 1928. The gallery's permanent collection has grown to over 4,000 works of art and continues to serve as an academic resource for the Howard community.[42]

Howard University Hospital, opened in 1975 on the eastern end of campus, was built on the site of Griffith Stadium, in use from the 1890s to 1965 as home of the first, second and third incarnations of the MLB Senators, as well as the NFL's Washington Redskins, several college football teams (including Georgetown, GWU and Maryland) and part-time home of the Homestead Grays of the Negro National League. 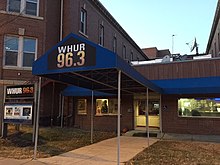 In 2017, Google Inc. announced it established a pilot residency program named "Howard University West" on its campus in Mountain View, California, to help increase underrepresented minorities in the tech industry. In 2018, the program expanded from a three-month summer program to a full academic year program and name changed to "Tech Exchange" to be inclusive of other minority-serving institutions added to the program.[60] Howard students in the program will learn from senior Google engineers, practice the latest coding techniques, and experience tech culture in Mountain View for course credit towards their degrees.[61][62] 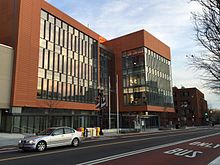 Howard's most prominent research building is the Interdisciplinary Research Building (IRB). Opened in 2016, the multi-story, 81,670 square foot, state-of-the-art research facility was completed for $70 million. The IRB was designed to promote more collaborative and innovative research on campus.[63]

"The Moorland-Spingarn Research Center (MSRC) is recognized as one of the world's largest and most comprehensive repositories for the documentation of the history and culture of people of African descent in Africa, the Americas, and other parts of the world. The MSRC collects, preserves, and makes available for research a wide range of resources chronicling black experiences."[64]

Howard University is home to The Hilltop, the award-winning (Princeton Review) student newspaper. Founded in 1924 by Zora Neale Hurston, The Hilltop enjoys a long legacy at the university, providing students with the ability to learn the newspaper industry. 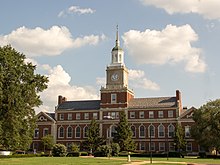 Founders Library is an iconic building on the Howard University campus that has been declared a National Historic Landmark. 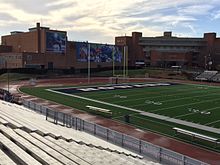 Greene Stadium. (Howard's School of Business is in the top-right).

Most of Howard's 21 NCAA Division I varsity teams compete primarily in the Mid-Eastern Athletic Conference (MEAC). 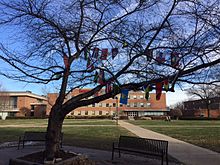 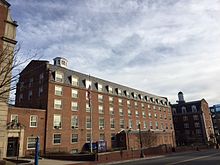 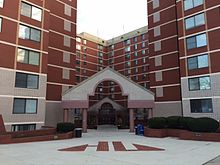 Howard University Towers East is one of the graduate student dormitories on-campus.

There are over 200 student organizations and special interest groups established on campus.[77] 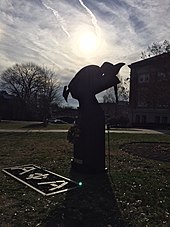 "Symbiosis" by Richard Hunt was a gift to the university by former school trustee Hobart Taylor.[82]

Howard University is the founding site of the National Pan-Hellenic Council (NPHC) and five of the nine NPHC organizations. The Alpha (founding) Chapters of Alpha Kappa Alpha (1908), Omega Psi Phi (1911), Delta Sigma Theta (1913), Phi Beta Sigma (1914), and Zeta Phi Beta (1920) were established on Howard's campus.[83] However, the Beta Chapter of Alpha Phi Alpha was the first to appear in 1907.[84] Also in 1920, the Xi Chapter of Kappa Alpha Psi appeared on campus, followed by the Alpha Phi Chapter of Sigma Gamma Rho in 1939, and the Alpha Tau Chapter of Iota Phi Theta in 1983. Three percent of undergraduate men and five percent of undergraduate women are active in Howard's NPHC.[85] 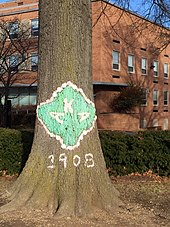 Howard Homecoming week is the most prominent and richest cultural tradition of the institution.[86][87] Over 100,000 of alumni, students, celebrity guests, and visitors are in attendance to patronize the many events and attractions affiliated with the festive week on and near campus. While the specific calendar of events changes from year to year, the traditional homecoming events include the Homecoming Football Game and Tailgate, Pep Rally, Coronation Ball, Greek Step-Show (Howard NPHC Greeks), and Fashion Show. After a two-year hiatus, the Yardfest returned in 2016 as one of the cherished traditions.[88][89][90]

Howard's first official homecoming was held in 1924 and it takes place every fall semester with a new theme developed by the homecoming committee.[91][92]

Springfest is an annual tradition created by the Undergraduate Student Association (UGSA) to celebrate the arrival of spring. Springfest is similar to Howard's homecoming week in the fall but on a smaller scale and more emphasis on the student body. Springfest events traditionally include the Fashion Show, Talent Show, Vendor Fair, Poetry Showcase, Beauty Conference, Charity Basketball Game, and a major community service event. The schedule of events changes slightly each year.[93][94]

The Bison Ball and Excellence Awards is an annual black tie gala hosted by the Howard University Student Association (HUSA). A select number of students, faculty, organizations, and administrators from the Howard community are honored for their exceptional accomplishments. This event takes place near the end of every spring semester.[95][96]