Progressive Conservative Party of Ontario George A. Drew George Stewart Henry
This article is about the Canadian politician. For the British composer, see Howard Ferguson (composer).

First elected to the Legislative Assembly of Ontario in the 1905 election, Ferguson served as Minister of Lands, Forest and Mines in the government of William Hearst from 1914 to 1919. As Minister, he approved the reservation of 5,000 square miles (12,950 km2) of pulpwood on Crown land to the Mead Corporation,[1] and a further 1,500 square miles (3,885 km2) to Abitibi Power and Paper Company,[2] despite the Crown Timber Act's requirement that pulp limits must be sold by public tender.[1] He declared, "My ambition has been to see the largest paper industry in the world established in the Province, and my attitude towards the pulp and paper industry has been directed towards assisting in bringing this about."[2] After becoming Premier of Ontario in 1923, Ferguson reserved a further 3,000 square miles (7,770 km2) to Abitibi.[3]

In addition, as Minister he sold timber limits to the Shevlin-Clarke Lumber Company (headed by fellow Conservative James Arthur Mathieu) for less than half the price they would have normally fetched,[4] and the company later paid a fine of $1.5 million for breaching the Crown Timber Act.[5] The transactions were criticized in a subsequent inquiry,[6] in which the commission reported:

We are of the opinion that no officer, Minister or otherwise, should have the power to grant rights over large areas of the public domain at will without regard to Regulation; that power was never contemplated by the statutes; it does not at present exist, and should not be given to any individual. Such an arbitrary power subject to no control is obviously open to abuse.[1]

Ferguson became leader of the Conservative Party upon the defeat of the Hearst government that year.

In the 1923 election, the Ontario Conservative Party came to power under Ferguson's leadership by defeating the United Farmers of Ontario-Labour coalition government of Ernest C. Drury. The Tories won 75 of the 111 seats in the legislature. Ferguson's government encouraged private investment in industry and the development of the province's natural resources as a means of achieving prosperity. It was re-elected in the 1926 election with 72 seats, and in 1929 with 90 seats. 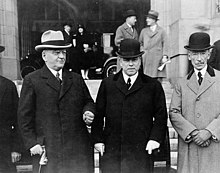 In 1911, Ferguson argued in the legislature that "no language other than English should be used as a medium of instruction in the schools of this Province," despite the fact that a significant proportion of the population was French-Canadian. Sectarian politics was still rife in Ontario, and the Conservatives relied on a base of Orange support. Ferguson was prepared to pander to the Orangemen with anti-Catholic and anti-French rhetoric.

In 1912, the Ontario government passed Regulation 17, which restricted the use of French language instruction to a minimum. This legislation outraged Quebec, and was an irritant to national unity during the First World War. When Ferguson became Premier, he reversed himself by moderating the legislation and allowing more French language instruction. His government, however, refused to extend funding for the Catholic Separate school system past the 8th grade.

Ferguson's reversal on Regulation 17 was a concession needed for his alliance with Quebec Premier Louis-Alexandre Taschereau. Ferguson and Taschereau formed an axis against the federal government to demand more provincial rights and defend the provinces' ownership of natural resources such as water power (i.e., hydro-electric generation).

The Ferguson government, eager for new tax revenue, held a plebiscite in 1924 to soften the province's temperance laws. A slim majority voted against prohibition, leading Ferguson's government to permit the sale of beer with an alcohol content of no more than 4.4 Proof, about 2.2% abv. Such brew became known as Fergie's foam.

The 1926 provincial election was fought on the issue of the government's proposal to repeal the Ontario Temperance Act and permit controlled sales of liquor in government owned stores. Attorney-General William Folger Nickle who had supported the government's earlier decision to allow the sale of low-alcohol beer, was opposed to going any further in softening temperance laws and resigned from Cabinet to run against the government as a Prohibitionist candidate against the repeal of the OTA. Ferguson's Conservatives were re-elected with a slightly reduced majority.

In 1927, the government introduced legislation to establish the Liquor Control Board of Ontario and allow the sale of alcohol by government-owned and operated liquor stores. The Tories' moderate stance on temperance allowed them to isolate the Liberals who, until 1930, took a hard prohibitionist stance opposing even regulated liquor sales. The Liberals' position alienated all but the most hard-line temperance advocates.

The Tories remained hostile to labour and immigrants, and were not prepared to provide social relief when the Great Depression threw thousands out of work and into poverty. The Ferguson government also opposed federal government plans for an old age pension.

In December 1930, Premier Ferguson left provincial politics to accept an appointment as Canadian High Commissioner in London. He was succeeded as party leader and Premier by George Stewart Henry.

Ferguson died of heart failure at his home in Toronto in 1946 and is buried at Mount Pleasant Cemetery, Toronto (in front of the Mount Pleasant Mausoleum).