Advertisement - You can get this game from STEAM
This article is about an economic, social, or socioeconomic grouping. For the article on the author, see Geoffrey Household. 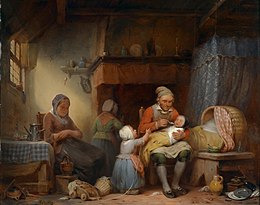 A household consists of one or more people who live in the same dwelling and share meals. It may also consist of a single family or another group of people.[1] A dwelling is considered[by whom?] to contain multiple households if meals or living spaces are not shared. The household is the basic unit of analysis in many social, microeconomic and government models, and is important to economics and inheritance.[2]

For statistical purposes in the United Kingdom, a household is defined as "one person or a group of people who have the accommodation as their only or main residence and for a group, either share at least one meal a day or share the living accommodation, that is, a living room or sitting room".[3] The introduction of legislation to control houses of multiple occupation in the UK Housing Act (2004)[4] required a tighter definition of a single household. People can be considered a household if they are related: full- or half-blood, foster, step-parent/child, in-laws (and equivalent for unmarried couples), a married couple or unmarried but "living as ..." (same- or different-sex couples).[5]

The United States Census definition also hinges on "separate living quarters": "those in which the occupants live and eat separately from any other persons in the building."[6] According to the U.S. census, a householder is the "person (or one of the people) in whose name the housing unit is owned or rented (maintained)"; if no person qualifies, any adult resident of a housing unit is considered a householder. The U.S. government formerly used "head of the household" and "head of the family", but those terms were replaced with "householder" in 1980.[7] In the census definition of a household, it

... includes all the persons who occupy a housing unit. A housing unit is a house, an apartment, a mobile home, a group of rooms, or a single room that is occupied (or if vacant, is intended for occupancy) as separate living quarters. Separate living quarters are those in which the occupants live and eat separately from any other persons in the building and which have direct access from the outside of the building or through a common hall. The occupants may be a single family, one person living alone, two or more families living together, or any other group of related or unrelated persons who share living arrangements. (People not living in households are classified as living in group quarters.)[8]

On July 15, 1998, Statistics Canada said: "A household is generally defined as being composed of a person or group of persons who co-reside in, or occupy, a dwelling."[9]

Although a one-income-stream economic theory simplifies modeling, it does not necessarily reflect reality. Many, if not most, households have several income-earning members. Most economic models do not equate households and traditional families, and there is not always a one-to-one relationship between households and families.

In social work, a household is defined similarly: a residential group in which housework is divided and performed by householders. Care may be delivered by one householder to another, depending upon their respective needs, abilities, and (perhaps) disabilities. Household composition may affect life and health expectations and outcomes for its members.[10][11] Eligibility for community services and welfare benefits may depend upon household composition.[12]

In sociology, household work strategy (a term coined by Ray Pahl in his 1984 book, Divisions of Labour)[13][14] is the division of labour among members of a household. Household work strategies vary over the life cycle as household members age, or with the economic environment; they may be imposed by one person, or be decided collectively.[15]

Feminism examines how gender roles affect the division of labour in households. In The Second Shift and The Time Bind, sociologist Arlie Russell Hochschild presents evidence that in two-career couples men and women spend about equal amounts of time working; however, women spend more time on housework.[16][17] Cathy Young (another feminist writer) says that in some cases, women may prevent the equal participation of men in housework and parenting.[18]

Household models in the English-speaking world include traditional and blended families, shared housing, and group homes for people with support needs. Other models which may meet definitions of a household include boarding houses, houses in multiple occupation (UK), and single room occupancy (US).

In feudal or aristocratic societies, a household may include servants or retainers who derive their income from the household's principal income.

A 1961–62 National Housing Institute survey estimated that 13.8 percent of Belgian dwellings were unfit and incapable of improvement. A further 19.5 percent were unfit but had the potential to be improved, and 54 percent were considered suitable (without alteration or improvement) for modern living standards. Seventy-four percent of dwellings lacked a shower or bath, 19 percent had inadequate sewage disposal, and 3.6 percent lacked a drinking-water supply; 36.8 percent had an indoor water closet.[34] According to a 1964 study, 13 percent of Belgium's housing consisted of slums.[35]

Between 1954 and 1973, the percentage of French homes with a shower or bath increased from 10 to 65 percent. During that period, the percentage of homes without flush toilets fell from 73 to 30 percent; homes without running water fell from 42 to 3.4 percent. A 1948 law permitted gradual, long-term rent increases for existing flats on the condition that part of the money was spent on repairs. According to John Ardagh, the law, "vigorously applied, was partly successful in its twofold aim: to encourage both repairs and new building."[36]