The Parliament of Jamaica is the legislative branch of the government of Jamaica. It consists of three elements: the Crown (represented by the Governor-General), the appointed Senate and the directly elected House of Representatives.

The Senate (Upper House) – the direct successor of a pre-Independence body known as the "Legislative Council" – comprises 21 senators appointed by the Governor-General: thirteen on the advice of the Prime Minister and eight on the advice of the Leader of the Opposition.

The House of Representatives, the Lower House, is made up of 63 (previously 60) Members of Parliament, elected to five-year terms on a first-past-the-post basis in single-seat constituencies.

The Parliament meets at Gordon House at 81 Duke Street, Kingston.[1] It was built in 1960 and named in memory of Jamaican patriot George William Gordon.[2] 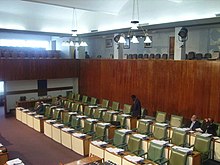 Inside the Parliament of Jamaica

As Jamaica is a parliamentary constitutional monarchy, most of the government's ability to make and pass laws is dependent on the Prime Minister's ability to command the confidence of the members of the House of Representatives. Though both Houses of Parliament hold political significance, the House of Representatives of which the Prime Minister and the Leader of the Opposition are both required to be members of holds a more powerful and prestigious role since it is the main source of legislation.

The House of Representatives is the Lower House. It is the group of elected members of parliament.

The Senate is the Upper House. This is the list of senators:

In order to effect changes to the Constitution of Jamaica a two-thirds majority in both Houses is required. Therefore, changes to the Jamaican constitution will require consensus among Government and Opposition Senators.