A hot dog[2][3] (also spelled hotdog) is a grilled or steamed food where the sausage is served in the slit of a partially sliced bun.[4] It can also refer to the sausage itself. The sausage used is the wiener (Vienna sausage) or frankfurter (Frankfurter Würstchen, also just called frank). The names of these sausages also commonly refer to their assembled dish.[5] Hot dog preparation and condiments vary worldwide. Typical condiments include mustard, ketchup, mayonnaise, relish, and cheese sauce, and common garnishes include onions, sauerkraut, jalapeños, chili, grated cheese, coleslaw, bacon, and olives. Hot dog variants include the corn dog and pigs in a blanket. The hot dog's cultural traditions include the Nathan's Hot Dog Eating Contest and the Oscar Mayer Wienermobile.

These types of sausages and their sandwiches were culturally imported from Germany and became popular in the United States. It became a working-class street food in the U.S., sold at stands and carts. The hot dog became closely associated with baseball and American culture. Although particularly connected with New York City and its cuisine, the hot dog eventually became ubiquitous throughout the US during the 20th century. Its preparation varies regionally in the country, emerging as an important part of other regional cuisines, including Chicago street cuisine.[6][7][8] 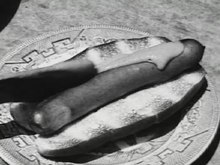 The word "frankfurter" comes from Frankfurt, Germany, where pork sausages similar to hot dogs originated.[9] These sausages, Frankfurter Würstchen, were known since the 13th century and given to the people on the event of imperial coronations, starting with the coronation of Maximilian II, Holy Roman Emperor as King. "Wiener" refers to Vienna, Austria (German: Wien), home to a sausage made of a mixture of pork and beef.[10] Johann Georg Lahner, an 18th/19th century butcher from the Franconian city of Coburg, is said to have brought the Frankfurter Würstchen to Vienna, where he added beef to the mixture and simply called it Frankfurter.[11] Nowadays, in German-speaking countries, except Austria, hot dog sausages are called Wiener or Wiener Würstchen (Würstchen means "little sausage"), to differentiate them from the original pork-only mixture from Frankfurt. In Swiss German, it is called Wienerli, while in Austria the terms Frankfurter or Frankfurter Würstel are used.

Carts selling frankfurters in New York City, circa 1906. The price is listed as "3 cents each or 2 for 5 cents".

A German immigrant named Feuchtwanger, from Frankfurt, in Hesse, allegedly pioneered the practice in the American midwest; there are several versions of the story with varying details. According to one account, Feuchtwanger's wife proposed the use of a bun in 1880: Feuchtwanger sold hot dogs on the streets of St. Louis, Missouri, and provided gloves to his customers so that they could handle the sausages without burning their hands. Losing money when customers did not return the gloves, Feuchtwanger's wife suggested serving the sausages in a roll instead.[12] In another version, Antoine Feuchtwanger, or Anton Ludwig Feuchtwanger, served sausages in rolls at the World's Fair – either at the 1904 Louisiana Purchase Exposition in St. Louis,[13][14] or, earlier, at the 1893 World's Columbian Exposition, in Chicago[15] – again, allegedly because the white gloves provided to customers to protect their hands were being kept as souvenirs.[16]

Another possible origin for serving the sausages in rolls is the pieman Charles Feltman, at Coney Island in New York City. In 1867 he had a cart made with a stove on which to boil sausages, and a compartment to keep buns in which they were served fresh. In 1871 he leased land to build a permanent restaurant, and the business grew, selling far more than just the "Coney Island Red Hots" as they were known.[17][18][19] 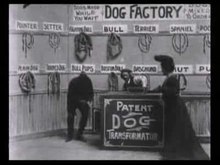 Play media
Dog Factory, a short film by Thomas Edison poking fun at what went into hot dogs in 1904

The term dog has been used as a synonym for sausage since the 1800s, possibly from accusations that sausage makers used dog meat in their sausages.[20] In the early 20th century, consumption of dog meat in Germany was common.[21][22] The suspicion that sausages contained dog meat was "occasionally justified".[23]

An early use of the term hot dog in reference to sausage-meat appears in the Evansville (Indiana) Daily Courier (September 14, 1884):

even the innocent 'wienerworst' man will be barred from dispensing hot dog on the street corner.[24]

It was used to mean a sausage in casing in the Paterson (New Jersey) Daily Press (31 December 1892):

According to one story, the use of the complete phrase hot dog in reference to sausage was coined by the newspaper cartoonist Thomas Aloysius "Tad" Dorgan around 1900 in a cartoon recording the sale of hot dogs during a New York Giants baseball game at the Polo Grounds.[20] However, Dorgan's earliest usage of hot dog was not in reference to a baseball game at the Polo Grounds, but to a bicycle race at Madison Square Garden, in The New York Evening Journal December 12, 1906, by which time the term hot dog in reference to sausage was already in use.[20][25] No copy of the apocryphal cartoon has ever been found.[26] 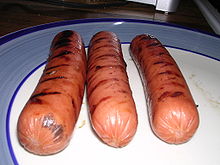 Pork and beef are the traditional meats used in hot dogs. Less expensive hot dogs are often made from chicken or turkey, using low-cost mechanically separated poultry. Changes in meat technology and dietary preferences have led manufacturers to lower the salt content and use turkey, chicken, and vegetarian meat substitutes. 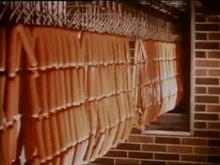 Hot dogs are prepared commercially by mixing the ingredients (meats, spices, binders and fillers) in vats where rapidly moving blades grind and mix the ingredients in the same operation. This mixture is forced through tubes into casings for cooking. Most hot dogs sold in the US are "skinless" rather than "natural casing" sausages.

As with most sausages, hot dogs must be in a casing to be cooked. Traditional casing is made from the small intestines of sheep. The products are known as "natural casing" hot dogs or frankfurters.[28] These hot dogs have firmer texture and a "snap" that releases juices and flavor when the product is bitten.[28]

Kosher casings are expensive in commercial quantities in the US, so kosher hot dogs are usually skinless or made with reconstituted collagen casings.[28]

"Skinless" hot dogs use a casing for cooking, but the casing may be a long tube of thin cellulose that is removed between cooking and packaging, a process invented in Chicago in 1925[29] by Erwin O. Freund, founder of Visking.[30]

The first skinless hot dog casings were produced by Freund's new company under the name "Nojax", short for "no jackets" and sold to local Chicago sausage makers.

A hot dog may be prepared and served in various ways.[31] Typically it is served in a hot dog bun with various condiments and toppings. The sausage itself may be sliced and added, without bread, to other dishes. 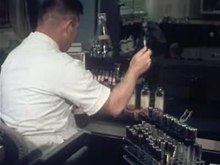 Although hot dogs are cooked during manufacture, it is still recommended that they are heated to an internal temperature of at least 165°F (75°C) prior to consumption.[32]

Most hot dogs are high in fat and salt and have preservatives sodium nitrate and sodium nitrite, which are contributors to nitrate-containing chemicals classified as group 1 carcinogens by the World Health Organization,[33] although this has been disputed.[34][35] These health concerns have resulted in manufacturers offering alternative product lines made from turkey and chicken, and uncured, low-sodium, and "all-natural" franks. Hot dogs have relatively low carcinogenic heterocyclic amine (HCA) levels compared to other types of ready-to-eat meat products because they are manufactured at low temperatures.[36]

An American Institute for Cancer Research (AICR) report found that consuming one daily 50-gram serving of processed meat — about one hot dog — increases long-term risk of colorectal cancer by 20 percent.[37] Thus, eating a hot dog every day would increase the probability of contracting colorectal cancer from 5.8 percent to 7 percent. The AICR's warning campaign has been criticised as being "attack ads".[35][38] The Cancer Project group filed a class-action lawsuit demanding warning labels on packages and at sporting events.[39]

Like many foods, hot dogs can cause illness if not heated properly to kill pathogens. An unopened package of hot dogs contains ingredients that have the potential for promoting the growth of Listeria bacteria. Listeria monocytogenes can also cause serious infections in infants and pregnant women, and can be transmitted to an infant in utero or after birth. Adults with suppressed immune systems can also be harmed.[40]

Due to their size, shape, and ubiquitous consumption, hot dogs present a significant choking risk, especially for children. A study in the US found that 17% of food-related asphyxiations among children younger than 10 years of age were caused by hot dogs.[41] The risk of choking on a hot dog is greatly reduced by slicing it. It has been suggested that redesign of the size, shape and texture of hot dogs would reduce the choking risk.[42]

In the US, the term "hot dog" refers to both the sausage by itself and the combination of sausage and bun. Many nicknames applying to either have emerged over the years, including frankfurter, frank, wiener, weenie, coney, and red hot. Annually, Americans consume 20 billion hot dogs.[43]

A Coney Island hot dog with chili, onion, and mustard

Hot dogs are commonly served with one or more condiments. In 2005, the US-based National Hot Dog & Sausage Council (part of the American Meat Institute) found mustard to be the most popular, preferred by 32% of respondents; 23% favored ketchup; 17% chili; 9% pickle relish, and 7% onions. Other toppings include sauerkraut, mayonnaise, lettuce, tomato, cheese, and chili peppers.

For a list of regional differences in hot dog preparation and condiments, see Hot dog variations. 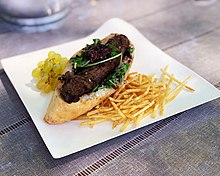 Many variations are named after regions other than the one in which they are popular. The "New York dog" or "New York style" hot dog, is a natural-casing all-beef frank topped with sauerkraut and spicy brown mustard, onions optional. Sauteed bell peppers, onions, and potatoes find their way into New Jersey's deep-fried Italian hot dog. In the midwest, the Chicago-style hot dog is served on a poppy seed bun and topped with mustard, fresh tomatoes, onions, "sport peppers", bright green relish, dill pickles, and celery salt. Michigan hot dogs are popular in upstate New York (as are white hots), while Coney Island hot dogs are popular in Michigan. Hot wieners, or weenies, are a staple in Rhode Island where they are sold at restaurants with the misleading name "New York System."[47] Texas hot dogs are spicy variants found in upstate New York and Pennsylvania (and as "all the way dogs" in New Jersey), but not Texas. In the Philadelphia metro area, Texas Tommy refers to a hot dog variant in which the dog is topped with melted cheddar or another cheese and wrapped in bacon.

Some baseball parks have signature hot dogs, such as Dodger Dogs at Dodger Stadium in Los Angeles, and Fenway Franks at Fenway Park in Boston, which are boiled then grilled, and served on a New England-style bun.

The Half Moon Drive In, also in Lockport, Manitoba, and located directly across the river from Skinner's, was established in 1938 by brothers Peter and Louie Kosowicz.[50] The original drive-in consisted of three wooden buildings shaped like semicircles — one was for takeout, one was for dine-in, and the third was a dance hall and later an arcade.[50] The Half Moon also serves European-style wieners manufactured by Winnipeg Old Country Sausage.[50] One of the most popular items on the menu is the Moon Dog, consisting of a hot dog topped with cheese, bacon, fried onions, pickles and mustard; the Half Moon serves about 2,000 on an average summer weekend day.[50]

For a list of international differences in hot dogs, see Hot dog variations. 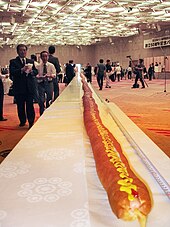 The world's longest hot dog was 60 meters (197 ft) long and rested within a 60.3-meter (198 ft) bun. The hot dog was prepared by Shizuoka Meat Producers for the All-Japan Bread Association, which baked the bun and coordinated the event, including official measurement for the world record. The hot dog and bun were the center of a media event in celebration of the Association's 50th anniversary on August 4, 2006, at the Akasaka Prince Hotel, Tokyo, Japan.