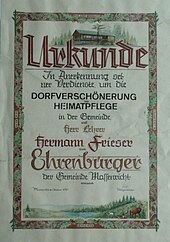 A certificate of honorary citizenship. 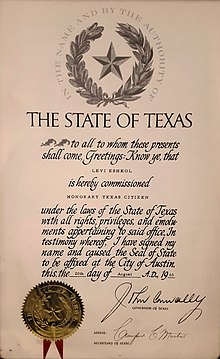 Honorary citizenship is a status bestowed by a country on a foreign or native individual whom it considers to be especially admirable or otherwise worthy of the distinction.

By act of United States Congress and presidential assent, an individual may be named an honorary citizen of the United States. Since 1963, it has been awarded to only eight individuals.

In Germany honorary citizenship is awarded by cities, towns and sometimes federal states. The honorary citizenship ends with the death of the honoured, or, in exceptional cases, when it is taken away by the council or parliament of the city, town, or state. In the case of war criminals, all such honours were taken away by "Article VIII, section II, letter i of the directive 38 of the Allied Control Council for Germany" on October 12, 1946.

In Ireland, honorary citizenship bestowed on a foreigner is full legal citizenship including the right to reside and vote.[1]

Darren Sammy (born 20 December 1983) is a Saint Lucian all-rounder cricketer who played international cricket for the West Indies. He is a two time T20 World Cup winning captain. The all-rounder will be given honorary Pakistani citizenship on 23rd March 2020 in response to a special request by Peshawar Zalmi ownership in recognition of the role played by the star in promoting the positive image of the country, which was accepted by President of Pakistan.[2]

Members of the Righteous Among the Nations may be conferred honorary Israeli citizenship by Yad Vashem, or commemorative citizenship if deceased. Those who choose to live in Israel are entitled to a pension, free health care, and assistance with housing and nursing care.