The Holy Alliance (German: Heilige Allianz; Russian: Священный союз, Svyashchennyy soyuz; also called the Grand Alliance) was a coalition linking the monarchist great powers of Austria, Prussia, and Russia. It was created after the final defeat of Napoleon at the behest of Emperor (Tsar) Alexander I of Russia and signed in Paris on 26 September 1815.[1] The alliance aimed to restrain liberalism and secularism in Europe in the wake of the devastating French Revolutionary Wars and the Napoleonic Wars, and it nominally succeeded in this until the Crimean War. Otto von Bismarck managed to reunite the Holy Alliance following the unification of Germany in 1871, but the alliance again faltered by the 1880s over Austrian and Russian conflicts of interest over the dissolution of the Ottoman Empire.[2]

Ostensibly, the alliance was formed to instill the divine right of kings and Christian values in European political life, as pursued by Alexander I under the influence of his spiritual adviser Baroness Barbara von Krüdener. Under the treaty European rulers would agree to govern as "branches" of the Christian community and offer mutual service. The agreement was at first secret, and mistrusted by liberals though liberalism was effectively restrained in this political culture until the Revolutions of 1848.[3]

About three months after the Final Act of the Congress of Vienna, the monarchs of Catholic (Austria), Protestant (Prussia), and Orthodox (Russia) confession promised to act on the basis of "justice, love and peace", both in internal and foreign affairs, for "consolidating human institutions and remedying their imperfections".

The Alliance was quickly rejected by the United Kingdom (though George IV declared consent in his capacity as King of Hanover), the Papal States, and the Ottoman Empire. Lord Castlereagh, the British Foreign Secretary, called it "a piece of sublime mysticism and nonsense".[4]

In practice, the Austrian state chancellor and foreign minister, Prince Klemens von Metternich made it a bastion against democracy, revolution, and secularism (although it is said that his first reaction was to call it "a resounding nothing"). The monarchs in the Alliance used it to suppress revolutionary influence (especially from the French Revolution) from entering their own nations. 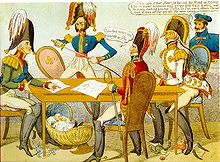 Contemporary caricature of the Congress of Verona, 1822

The Alliance is usually associated with the later Quadruple and Quintuple Alliances, which included the United Kingdom and (from 1818) France with the aim of upholding the European peace settlement and balance of power in the Concert of Europe concluded at the Congress of Vienna. On 29 September 1818, Alexander, Emperor Francis I of Austria and King Frederick William III of Prussia met with the Duke of Wellington, Viscount Castlereagh and the Duc de Richelieu at the Congress of Aix-la-Chapelle to demand stern measures against university "demagogues", which would be realized in the Carlsbad Decrees of the following year. At the Congress of Troppau in 1820 and the succeeding Congress of Laibach in 1821, Metternich tried to align his allies in the suppression of the Carbonari revolt against King Ferdinand I of the Two Sicilies. In 1821 the Alliance met in Ljubljana. The Quintuple Alliance met for the last time at the Congress of Verona in 1822 to advise against the Greek Revolution and to resolve upon the French invasion of Spain.

The last meetings had revealed the rising antagonism with Britain and France, especially on Italian unification, the right to self-determination, and the Eastern Question. The Alliance is conventionally taken to have become defunct with Alexander's death in 1825. France ultimately went her separate way following the July Revolution of 1830, leaving the core of Austria, Prussia, and Russia as a Central-Eastern European block which once again congregated to suppress the Revolutions of 1848. The Austro-Russian alliance finally broke up in the Crimean War. Though Russia had helped to suppress the Hungarian Revolution of 1848, Austria did not take any action to support her ally, declared herself neutral, and even occupied the Wallachian and Moldavian lands on the Danube upon the Russian retreat in 1854. Thereafter, Austria remained isolated, which added to the loss of her leading role in the German states, culminating in her defeat during the Austro-Prussian War in 1866.