Holguín (Spanish pronunciation: [olˈɣin]) is a municipality and city in Cuba, and the capital of Province of Holguín. After Havana, Santiago de Cuba, and Camagüey, it is the fourth largest city in Cuba.

Before Columbus, the Taino people settled in huts made from royal palm in the Holguin area later urbanized by the Spanish; their artefacts shown at the local Holguin La Periquera museum. The settlement was founded in 1523 on land donated by Diego de Velázquez to Captain Francisco García Holguín, a Spanish military officer. Holguin added his maternal surname to the name of the town, giving it the nameSan Isidoro de Holguín.[4] Prior to 1976, Holguín was located in the province of Oriente. Before Pope Francis's visit to the United States, in September 2015, he visited Cuba, and one of his stops was at the Diocese of Holguín to, among other things, commemorate the location where Christopher Columbus landed.

At present time, some of the above are part of other municipalities, but the following still belong to Holguín: Aguas Claras, Guirabo, La Cuaba, Las Calabazas, Purnio, San Andrés, Yareyal. 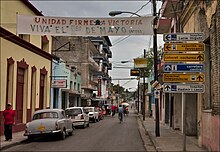 The brewery Cervecería Bucanero is based in the city. It makes three brands of beer (Bucanero, Cristal and Mayabe) sold in convertible pesos.

There are two small hotels (or villas) focusing on health tourism in the outskirts of the city, very close to the airport: Villa El Quinque and Villa El Cocal. Patients like Argentine football (soccer) star Diego Maradona have been treated there for substance addiction.

There are also two established city hotels (Pernik and El Bosque). More recently, a few small (boutique) hotels, managed by Hoteles E, have opened (Caballeriza, one block away from Parque San Isidoro (Las Flores), and Esmeralda, right across from Parque San José). As of May, 2020, and after a major restoration, there's a third boutique hotel about to be inaugurated (Saratoga, right across one of the corners of the main plaza and heart of the city (Parque Calixto Garcia).

There are several small city parks such as Parque Infantil, Parque San José, Parque San Isidoro (Las Flores), Parque Martí, among others, most central the Calixto García in the downtown area. Close by one finds the galleries Centro Provincial de Arte and Bayado, a library, the club Casa de la Trova, the Martí cinema, the Theatre Eddy Suñol, the Province Museum La Periquera, a science museum, and a history museum.

One of the most famous landmarks of the city is the hill Loma de la Cruz (English: Hill of the Cross), which can be ascended by climbing its +450 stairs, and from where the whole city can be admired. There, in the early years of the city, a large cross was erected with the belief that it would protect it from evil coming down from the North.

Holguín has a baseball stadium, named after Calixto García.

Holguín is served by Frank País Airport (HOG/MUHG), located at 20°47´08"N, 076°18´54"W, with flights to Havana and several other world destinations, mostly in Canada and Europe.