Hockey Canada, which merged with the Canadian Amateur Hockey Association in 1994, is the national governing body of ice hockey and ice sledge hockey in Canada and is a member of the International Ice Hockey Federation. Hockey Canada controls a majority of ice hockey in Canada.[1][2] There are some notable exceptions, such as the Canadian Hockey League and U Sports (formerly known as Canadian Interuniversity Sport) who are partnered with Hockey Canada, but are not members, as well as any of Canada's professional hockey clubs. Hockey Canada is based in Calgary, with a secondary office in Ottawa, Ontario and regional centres in Toronto, Winnipeg and Montreal. 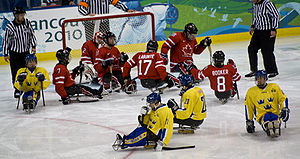 The Canadian Amateur Hockey Association was founded on December 4, 1914, when 21 delegates from across Canada met at the Chateau Laurier in Ottawa. The organization was made to oversee the amateur level of the sport at the national level. The Allan Cup, originally donated in 1908 by Sir H. Montagu Allan, was selected as the championship of amateur hockey in Canada. William Northey, the trustee of the Allan Cup, was named the first ever chairman, while Dr. W. F. Taylor was named the inaugural president. The Memorial Cup was the junior amateur championship of Canada.[3]

In 1920, after the Winnipeg Falcons won the Allan Cup over the University of Toronto, they represented Canada at the 1920 Summer Olympic Games. Canada would go 3-0-0 to win the sport's first ever Olympic gold medal.[3]

On June 30, 1947, the CAHA, the National Hockey League and the Amateur Hockey Association of the United States makes an agreement that no player under the age of 18 can be signed as a professional player without the permission of their amateur club. That same year, the International Ice Hockey Federation changes the rules on amateur status. The rule change means the 1948 Allan Cup champion Royal Montreal Hockey Club were not eligible for the 1948 Winter Olympics, so the CAHA sent the RCAF Flyers instead and were victorious.[3]

At the 1952 Winter Olympics, the Edmonton Mercuries won their nation's last Olympic gold until 2002.[3]

In 1961, the Trail Smoke Eaters won Canada's 19th and last world championship for 33 years at the 1961 World Ice Hockey Championships. In 1964, Father David Bauer formed the Canada's national team in response to the success of the programs set up by the Soviet Union, Czechoslovakia, and Sweden. Three years later, the CAHA opened its first ever national office, located in Winnipeg.[3]

In 1968, the Hockey Canada organization was founded to oversee Canada's national teams.

Also in 1970, Canada pulled out of IIHF competition and would not return to the fold until 1977[3] in protest of the IIHF's soft stance on Soviet and Czechoslovakian teams using "professional amateurs" in international competition but not allowing professional players to compete for Canada.

In 1972, Canada and the Soviet Union competed in the 1972 Summit Series. Canada's team was composed of NHL stars, while the Soviet players were from the Red Army. The NHLers won the series 4-3-1.[3] Two years later, the World Hockey Association represented Canada and lost the series 4-1-3. In 1976, the Canada Cup was formed as a best-on-best championship.

In 1975, the QMJHL, WCJHL, and the renamed Ontario Major Junior Hockey League form an umbrella organization known as the Canadian Major Junior Hockey League. With the creation of the CMJHL, the three league began initiating compensation talks with the NHL and WHA without CAHA input. In 1980, the CMJHL separated from the CAHA, only staying loosely affiliated with the national body. With the separation of the CMJHL, Tier II was promoted to simply Junior A, although the Tier II title still persists in hockey vernacular. To this day, the CMJHL (now Canadian Hockey League) releases its players to Hockey Canada to play at the World Junior Ice Hockey Championships.

In 1983, the first Abby Hoffman Cup was awarded to the Burlington Ladies as the Canadian national senior champions of women's hockey.

In 1990, the forerunner to the Canadian Junior Hockey League was created as an umbrella organization, within the CAHA, to oversee Junior A hockey.

The Canada women's national ice hockey team was formed in 1987 and won the first (unofficial) world championship that year. The 1990 IIHF Women's World Championship was the first official event, also won by Canada.[3]

In 1996, Hockey Canada replaces the Manitoba Centennial Cup with the Royal Bank Cup as the championship of Junior A hockey.

In 1998, Hockey Canada and the CAHA merge into one organization. Also, the International Olympic Committee elected to allow professional players to compete at the Olympics and creates a women's event at the games. That same year, Hockey North became the 13th branch of Hockey Canada.[3]

In 2004, the Canada men's national ice sledge hockey team is welcomed into the Hockey Canada fold,[3] and Mark Aubry was named the Chief Medical Officer of Hockey Canada.[4][5]

The Clarkson Cup, donated by the Governor General of Canada Adrienne Clarkson, was created in 2006, and was first awarded in 2009 to the Canadian national senior champions of women's hockey.[6] The Clarkson Cup replaced the Abby Hoffman Cup.

The IOC and COC informed Hockey Canada that its logo would no longer be allowed on Team Canada jerseys as of the 2010 Winter Olympics.[7] Without the Hockey Canada logo jersey, Team Canada's men and women would win gold in both 2010 and 2014.[8][9]

Organizations in cooperation with Hockey Canada 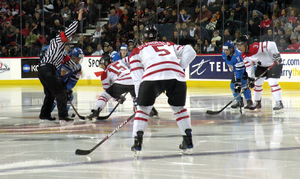 Canadian national junior team vs Finland at an exhibition game in Calgary.

Some junior leagues, like the Greater Metro Junior A Hockey League and formerly the Manitoba Major Junior Hockey League operate outside the jurisdiction of Hockey Canada. These leagues usually appear for a variety of reasons, ranging from disagreeing with the new Canadian Development Model implemented in 2005 to disagreeing with various zoning restrictions or anger over player raiding by other leagues. In the summer of 2009, Hockey Canada told players that they would have to choose to play within Hockey Canada or outside of Hockey Canada by September 30 of each playing year. At the end of each playing year the player has the right to apply to reenter Hockey Canada if they played in an independent league.

A result of the slow decline of senior hockey in Ontario is the growth of another independent league, the WOAA Senior AA Hockey League. In existence independent since 1943, the WOAA now has 18 senior hockey teams. The WOAA uses the Hockey Canada rule book, but with stricter import rules. The WOAA is very popular in the northern portions of Southwestern Ontario. Most WOAA teams have deep community roots including the sponsorship of minor hockey tournaments.

Less senior hockey has led to widespread growth in recreational adult hockey. Although Hockey Canada has attempted to make moves into recreational hockey and does offer insurance policies to participants, they have failed to make a dent in a nationwide practice.